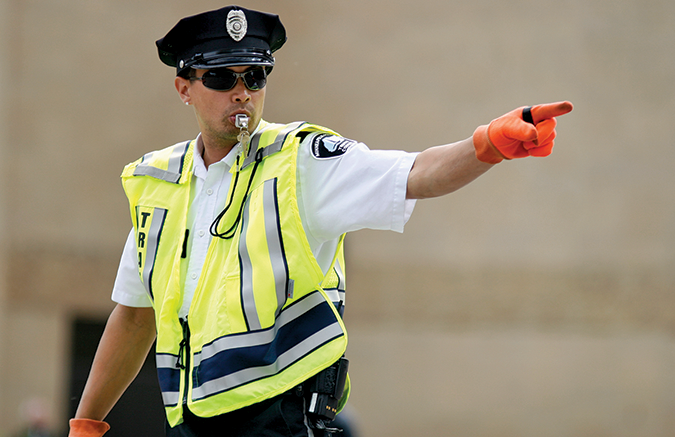 “You point directly at the person’s face,” the sergeant said, demonstrating. I was enthralled by the realization that directing traffic, something seemingly so mundane and easy – or so I thought – could have such specific science in its workings. It was 1979 and I was a recruit in Basic Law Enforcement Class #41 at the Southeast Florida Institute of Criminal Justice, better known as the police academy.

Sgt. Ben Robbins was the traffic guru and he methodically explained to us the “right way” to direct traffic. You use large, simple gestures; not small ones. You are very specific and you make sure you get the attention of drivers. If you don’t, he told us young wide-eyed recruits, you could cause a crash or you get run over yourself. This has all come back to me recently because, in my new job as Director of Security at a very dynamic and busy private school, I have been put in charge of traffic routes and parking, among other things. Recent construction at the school has resulted in a new building, two new parking areas and two new access roads.

“Come up with plans for pickup and drop-off times,” my higher-up nodded to me. “Make diagrams so that I can run it by the leadership team.”

Traffic routing for roughly 800 arriving students – some arrive as pedestrians; some are dropped off by parents; and about 120 seniors are allowed to park on campus – would normally be a pretty simple thing to draw up. Ah, but this is 2020 and nothing is simple, is it, my friends? Every student arriving on campus has to assure us that he/she is “safe” (free of COVID-19 symptoms) and the campus we have is not conducive to having thermal imaging. We don’t have one enclosed area through which everyone can be channeled. I’ve learned a lot about thermal imaging lately and I’ve found that it is not South Florida weather-friendly. It’s not unusual for us to have high humidity and even rainstorms early in the morning. So, thermal imaging kiosks were out. Trust me, we looked at them, had many hours of Zoom meetings with their reps to discuss the possibilities, and we opted for a different plan. We would instead use an app on which everyone has to register and every morning the students fill out an electronic promise that they don’t have a temperature over 99.9 degrees, haven’t been in contact with anyone who has tested positive for COVID, and so on. You probably know the drill and the questions.

What this also means is that no one can get out of his/her car without showing us (my team of morning app checkers) his/her green wellness check mark. So, at morning drop-off, I have nine teachers and administrative personnel on hand at the pedestrian gate, the parent drop-off “loop,” and at the senior parking lot, directing people in and out and checking apps. I found myself reverting to the training taught to me 41 years ago. Point at the driver you want to move – point right into his/her eyes, the sarge told us – and then blow your whistle and initiate that bent arm “come to me” gesture. Oh, but my civilian oriented team was wiggling their fingers, giving little circular beckonings with their hands…all futile movements which I know would have Sgt. Robbins shaking his head in frustration (and, sadly, we don’t have whistles).

“Drivers can’t see small, rapid movements like that,” Robbins told us. “From the driver’s seat, with low light, maybe rain falling, those tiny little rapid movements can be misconstrued.”

But, my dilemma was this: How much of a law enforcement geek was I going to look and sound like if I started incorporating traffic direction training with my mostly faculty morning traffic team? I mentioned it in passing to two of them who were standing nearby.

“This brings me back to my uniform days,” I said absently, dying inside to become the incarnation of Sgt. Ben Robbins and hold a traffic directing class right there.

“Oh, really? You actually did this out on the streets?”

That, and a whole lot more, friend.

Just then, another faculty member about 30 yards away moaned and threw up his hands.

“These people aren’t paying attention!” he grumbled. “I’m waving them in and they just sit there!”

I walked over to him and showed him the Robbins’ method. What the hell, I thought, I’ll risk being deemed some sort of paramilitary control freak.

“Certificates will be distributed later today,” I joked, very happy with myself.

At day’s end, it’s dismissal time and parents come and line up in the loop to pick up their kids. Our whole mission is to keep them moving up in the loop, so we don’t incur a backup out to the main road. It’s amazing to me how people act in these situations. They move their cars gingerly, as if there was some sort of vehicular version of COVID-19 making its way through society, infecting cars at an alarming rate. The same people who will be two inches off your bumper on I-95 doing 75 mph are somehow terrified to move their car up in a pickup loop, lest they should get within 20 feet of the car in front of them. It’s downright baffling, but I had 27 years of dealing with baffling human behavior, so it doesn’t get under my skin anymore.

If you are smacking yourself in the face right now, thinking, “I read through this column to hear about school pickup and traffic directing??” – fear not. Your loyal readership is not in vain. The big takeaway (oh, there’s a big takeaway? Ha!) of this column, brothers and sisters, is how duty and habit follow you around. This November 30th, I’m 14 years retired from police work. But, I still watch uniform cops whenever I see them directing traffic, and I think of Ben Robbins, and I check to see if they are doing it right. I still can’t help but notice that, when I see a young cop working an off-duty job in a grocery store, leaning against the wall, texting on his phone, and think, “Nooooo…you look like shit!”

I saw this just yesterday and I wondered what would happen if his sergeant walked through the door. Then I noticed the three chevrons on his sleeve (sigh).

Yes, I still hear and read about some investigation going on and wonder if they’ve done this or that, and I think back to the investigative standards to which my department held us. There are mornings, of course, when I get up and start getting dressed for work and think, “Ah, Nyberg, you’re not a cop any more…you’ve lost all that…just accept it and do your civilian stuff now and forget those old habits.”

And, as that thought settles in and I accept my new role as a civilian, what happens?

I check my gig line.