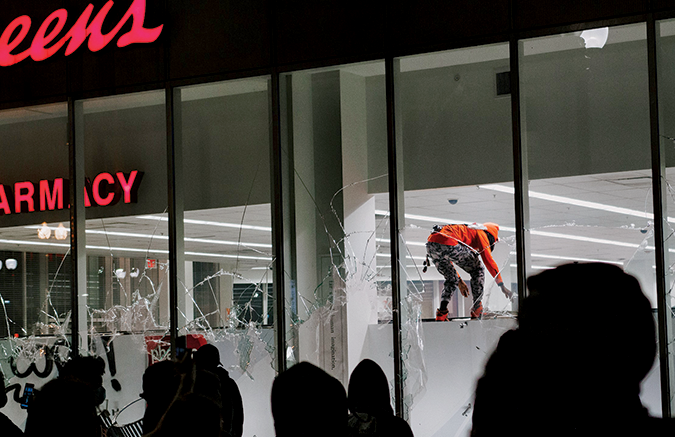 If there is a silver lining to 2020, it is that this has laid bare the true colors of our politicians. Before you recoil in horror (Nyberg is talking politics?), let me assure you, this is not a piece about politics. I am not going to venture into those shark-infested waters to discuss the Dems vs. the Republicans and all that. There’s enough – no, there is way too much – hostility going in both directions about that. The way I prefer to characterize the flavor of this column is to say that it is about what is right. What is right is for politicians to do what they were elected to do: provide protection and responsible management for their citizens.

A colleague and I were talking about Portland, Oregon, and other American cities which have been mired in violence and unrest for three months now (at the writing of this column) since the death of George Floyd. I don’t care what political party you belong to. Whether you are young or old, or whether you are black, white or any shade in between, the truth about government is this: Protect the citizens from harm first. Mayors and governors have an indisputable duty to make sure that their cities and states do not fall into abject anarchy. There is not one city in the United States which does not have adequate police manpower and legal authority to provide that very basic expectation. Even in ancient Greece, as far back as 3000 BC, the powers that be recognized that law and order had to be a part of their government. The police were considered a part of the city; hence, the word “police” comes from the Greek word polis which means “city.” The early towns of 10th century England – “shires” – had a constable who was responsible for making sure the shire was buttoned up tight at night and all of the taverns were closed (and, no doubt, he assisted in closing them!). He was a called a “reeve” – and the “shire reeve” later melded into the word “sheriff.”

But, that’s enough history. They didn’t have cell phones and YouTube in 10th century England and they didn’t have tear gas and TASER®s, either. But, here is what they did have: Like every community all the way back to the Stone Age, they had people who misbehaved and they had people responsible for managing that bad behavior. Nothing, absolutely nothing, about societies has changed in thousands of years with regard to that aspect of local government. They also had people in charge – magistrates, kings, shire reeves, and what have you – who were looked upon by the citizens as their protectors. Sure, it was probably corrupt as hell. The more money you had, the more protection you got. Today, we’ve managed to even it out more effectively – pay taxes, get the protection of government. Those who went overboard in bygone days and did more oppressing than protecting didn’t face losing an election. Instead, they might have faced losing their heads (see French Revolution) in an uprising or a coup by a rival.
The responsibilities of today’s civic leaders are virtually unchanged. If you are a mayor, county manager or governor, and you see anarchy and chaos running amuck, it is your JOB to stop it – not explain it, not side with a movement or a political ideology – stop it in its tracks. If you don’t, you’ve failed in your job. If you turn your back on the very police you have made swear would uphold the law and let the anarchists overrun a neighborhood, burn the police station, and let violent goons establish gang mentality street law, then you have done worse than fail: You have become complicit and you are a criminal yourself.

Our elected leaders should have one important attribute above all and that is courage. What courage means, when your city is being set afire and innocent people cannot walk to the pharmacy or the grocery store without being accosted, is sending in a platoon of well-trained officers and getting in front of the television cameras to make this announcement:

There are some people in our midst who are attempting to destroy your way of life and terrorize you. I will not have it. I have instructed our police force to arrest every one and anyone who attempts to commit a crime in our city. You are welcome to come out and peacefully picket, chant and carry signs to express your feelings. We will even protect you while you do so. But, if you so much as pick up a rock and cock your arm, you will go to jail – and you will be prosecuted, not excused. You can call us racists and pigs, and any other name you like, and you can scream it until you are hoarse. You can post stuff on YouTube or whatever (and thanks because we’ll use it as evidence in your prosecution). It doesn’t matter – you will go to jail anyway.

By the way, there is no such thing as ‘looting’ in our jurisdiction. It’s called burglary which is a felony. That’s what will happen if you enter a place where you don’t belong with the intention of stealing or destroying. ‘Looting’ is a term people use when they want to ‘soft touch’ a serious crime.

If you are watching this and you are one of those people who are preparing to go out and be destructive tonight, then mark my words – there are way more peace-loving people in this city than there are your kind. And, we don’t care what color or age you are, you will be arrested and our police will not run from you. If you don’t like it, go to the polls and vote me out. But, that’s what’s going to happen. Law and order rule the day here, not you.”

Whew. I feel so much better. I’ve spoken to the fictional citizens in my fictional town and you know what? They are happy! They wanted this. They elected me for this. They wanted someone with courage. I cannot let them down.

Bless you all, Brothers and Sisters. I hope you’re all working for someone who can say those things with conviction and stick to it. Be safe out there.