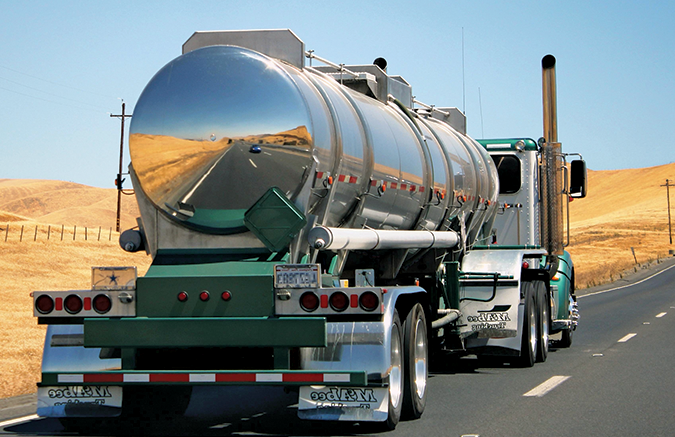 What happened to the “no shirt, no shoes, no service” rule?… In Modesto, California, Webcam footage from a Cherokee Freight Lines tanker truck showed a vehicle pulling in front of the big rig. The driver, who had his hazard flashers on, directed the truck driver to pull over. The trucker then stopped, thinking he might have a mechanical problem. The incident then took on a bizarre twist. Wearing nothing more than his underwear, the driver of the car then jumped out of his car, ran to the back of the truck and disappeared from the driver’s view. The trucker then pulled away and tried to distance himself from the man by driving his rig back onto the freeway. When he reached highway cruising speed, the half-naked man suddenly reappeared, climbing on the side of the truck. Hanging on, he positioned himself near the bottom of the tanker and opened up a large valve. Suddenly, the truck’s cargo of red wine started to gush out and the man positioned his mouth into the stream and gulped down as much as he could swallow. The driver called the police and the man, now inebriated, was arrested. Unfortunately, the tanker truck lost about 1000 gallons of red wine, most of it ending up on the highway.(Apparently, it was “wine o’clock” in Modesto.)

“Just walk casually; they won’t notice us”… In Virginia, Louisa Police say two people wore hollowed-out watermelons on their heads, with holes cut in them for their eyes, as a disguise. Surprisingly, the melons stayed in place long enough for them to “commit larceny.” Security video from the Sheetz Gas Station showed the two melon-heads strolling into the business where they reportedly committed their crime. The Louisa County Sheriff’s Office reportedly used the security video to see their getaway vehicle and one suspect was arrested. (A rind is a terrible thing to waste.)

Ah, gee, Mom, all of my friends are doing it!… A young female student recently recorded herself on video as she licked a toilet seat during a flight to Miami in what she called the “coronavirus challenge.” She posted the video to Twitter with a caption which read, “Please RT this so people can know how to properly be sanitary on the airplane.” The six second clip shows her squatting next to the airplane toilet, licking the seat and then throwing up peace signs for the camera. In numerous interviews, she essentially said that she wanted to take advantage of all the buzz surrounding COVID-19 in order to get attention. In a subsequent interview with Dr. Phil, she admitted that she had lied and had bleached the toilet seat before she licked it. She explained that she was upset because COVID-19 was “getting more attention than she was.” (She just joined the “Vile High Club.”)

Cocaine deposits at this bank earned this customer a lot of “interest” from local police… A man in Jefferson County, Colorado, had money he knew he had to deposit at the local bank and he headed on over to do his business. Upon arrival, he pulled up to the drive-thru and then diligently placed his deposit in the pneumatic tube and sent it on its way to the teller. Unfortunately, he included two bags of cocaine along with the cash he was depositing. The teller quickly called the police and responding officers found more drugs in his car. The man was arrested and all of the cocaine was taken into evidence. (I’d like to withdraw an eight ball, please.)

I’m making my sign now… A 93-year-old Pennsylvania woman, whose plea to neighbors for more beer went viral on social media, got her request fulfilled by the Coors Brewery Company. The elderly woman, of Seminole, went viral after a news station shared a photo on Facebook showing her standing with a can of Coors Light and holding a sign in her window reading, “I need more beer.” She later said several people have since reached out offering her beer. Coors Light said in a Twitter post that she would soon be receiving some beer directly from the company. “She asked and beer is on its way!” the tweet said. (My sign’s been up for an hour now and nothing’s happened.)

Pants are so pre-coronavirus… A Maryland police department’s Facebook post serves as a final warning to a resident who has apparently been leaving his house without pants to check his mail. The Taneytown Police Department’s cryptic warning is for a local resident who apparently has a habit of checking the mail without pants during the coronavirus lockdown. Officers with the department posted a reminder to its Facebook page which appears to be specifically aimed at an unnamed resident. The post serves as a reminder that, despite the COVID-19 pandemic, some dress code rules remain in effect. “Please remember to put pants on before leaving the house to check your mailbox. You know who you are. This is your final warning,” the post states. (I guess we know who wears the pants in that family.)

All of this COVID-19 humor means we’re in the midst of a “pundemic”… In Newport, Oregon, police were compelled to remind residents that running out of toilet paper is not, in fact, an emergency worthy of dialing 911. The coronavirus has taken a toll on supplies of toilet paper, hand sanitizer and other disinfectants. But, the run on TP caused the Newport Police Department to post, “Please, for goodness’ sake, don’t panic if you run out. It’s hard to believe that we even have to post this. Do not call 9-1-1 just because you ran out of toilet paper.” The department told residents, “You will survive without our assistance.” Newport police ended their public service announcement with some soothing words. “This too shall pass,” they said. “Just don’t call 9-1-1. We cannot bring you toilet paper.” (Social distancing is especially important when people who have run out of toilet paper are involved.)