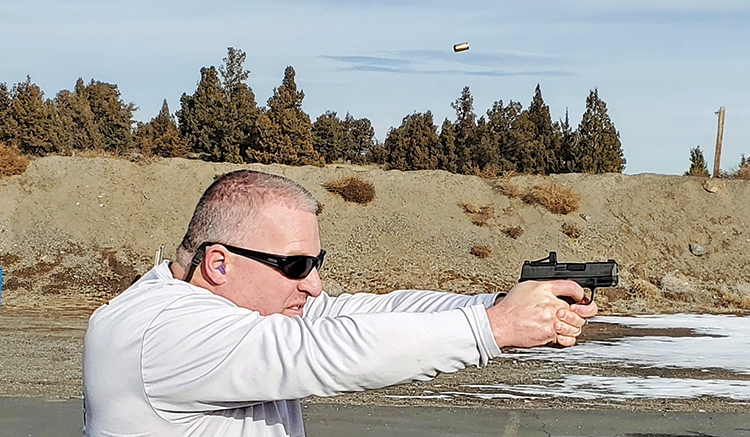 In modern history, “Hellcat” has been one of the names used for some of the baddest and most powerful machines ever developed.

From the Grumman F6F Hellcat Navy fighter in WWII to the Dodge® Hellcat Challenger and Charger muscle cars, the Hellcat name means power and capability.  Springfield Armory® might be onto something here.

If you haven’t entered the arena of micro red dot sights on pistols yet, you’re in for a treat. The Springfield Armory Hellcat is available in the Optical Sight Pistol (OSP®) configuration which is only $30 more than the standard iron sight version. For law enforcement, if you haven’t considered a micro red dot on a service or concealed carry pistol yet, you’re falling behind. Pistols equipped with optics are no longer in the distant future. They are here and ready for everyday carry and duty use. As a result, I requested the OSP version to test and evaluate.

Let’s get through the elementary stuff first. The Hellcat is a polymer framed, striker-fired, micro-compact pistol. It takes a full load of 11+1 with a flush-fit magazine and an impressive 13+1 load with the extended magazine. This makes it the highest capacity micro-compact 9mm pistol available. It’s also one which you can comfortably carry all day due to its small size and light weight. This pistol weighs a scant 18 ounces (unloaded) and is only one inch thick at its widest point.

Upon pulling the Hellcat OSP out of the box, I was impressed with the ergonomics of this pistol for concealed carry. It has a high beavertail on the backstrap to protect the shooter’s hand and the trigger guard is dramatically undercut near the frame. Both of these details promote a high grip which gets the center of the bore as high as possible to the shooter’s primary hand, reducing movement during recoil and allowing fast recovery back on target between shots.

The grip texture is very well done. It feels natural and provides a solid placement in the hand. It’s not too rough and it’s not too smooth. It’s just right. Springfield even put texturing on the forward portion of the frame, giving the operator an index point for their support hand thumb and trigger finger. The shape of the frame and grip are comfortable, especially with the 13 round extended magazine in place. Combined with the superb grip texture, it stays anchored in your hand while shooting.

The Hellcat has a reversible magazine release for those of you whose arms are on backwards; however, the slide release lever is not ambidextrous. The magazine and slide release levers are on the small side (like all other micro-compact pistols) which allow a low profile for concealment carry. There is also a short section of rail on the dustcover to accommodate a light or laser.

Before my trip to the range, I tested it on my trigger pull gauge. The trigger was uniform and broke at a consistent six pounds, eight ounces of pressure. I measured the trigger again after about 500 rounds and it settled into a comfortable six pounds, four ounces. It utilizes a center trigger safety lever; however, the trigger has a flat profile, making it feel crisper than the trigger gauge would lead you to believe. The reset is very definitive, so those of you who like a tactile and audible positive reset will really appreciate this point. Is it the best trigger on a micro-compact everyday carry pistol? If not, it’s pretty close.

The Hellcat is not a downsized XD® pistol. This little guy looks and feels different than the XD and XD-M® series of pistols. For one, the grip safety on the backstrap is gone. Thank you, Springfield Armory! I have experience with the XD and XD-M pistols shooting IDPA and USPSA; however, I’m not fond of a grip safety for an everyday concealed carry pistol.

The slide of the Hellcat includes front and rear cocking serrations which offer a solid grasping surface when loading, unloading or doing press checks. These serrations are both functional and they look good. They’re angled slightly forward and consist of wider cuts separated by ridges, with narrow ridges running down the middle. There’s also a cutout at the rear of the barrel hood on top of the slide which serves as a loaded chamber indicator.

The pistol came equipped with an excellent set of AmeriGlo Pro-Glo sights which feature a bright green tritium and luminescent front sight paired with a white outline U-notch rear sight. These are fast to acquire and a great addition to any handgun. The OSP model includes a removable optic plate and was set up with a SHIELD RMSc Mini Red Dot Sight. This is a compact, lightweight, low profile red dot sight which cowitnesses with the AmeriGlo Pro-Glo sights. The 3 MOA optic runs on a 3V lithium CR-2032 battery which gives it a runtime of one to two hours. The optic is not included with the Hellcat OSP, but the mounting surface is set up for almost any other similar optic.

How does it shoot, you ask? I tested it with duty ammunition, typical training ammunition, an assortment of various ammo which I had laying around, and my own competition and training reloads. This pistol is a tack driver; however, I’m not one for testing accuracy from a benchrest and measuring groups. I will say that it shot One Hole Drills back to seven yards with me at the controls. The Hellcat shot better than I could ask of it.

After warming up with the One Hole Drills, I started running this new pistol hard and fast. I figure that, if Springfield Armory is going to use the Hellcat title, then this little rocket should be capable of keeping up with the expectations of that name. Using a CrossBreed® holster and running all the drills from concealment, it responded without breaking a sweat. The ergonomics of this pistol allow it to recover from recoil quickly and consistently. I was able to achieve really good Bill Drill times with the Hellcat. They were not just good times for a small, concealed carry pistol; they were good times for a full-size duty gun. At seven yards, on the shot timer, the Bill Drill is six rounds center mass. I was able to consistently get all “A” zone hits in 1.9 seconds. My fastest time with all “A” zone hits was 1.78.

I did a side-by-side comparison with the Hellcat OSP and the SIG SAUER® P365. These two micro-compact pistols have led the pack with size and ammunition capacity, so this seemed like a natural. I set up the 10 x 10 Drill and learned that I was able to run the Hellcat and the P365 to slide lock, but wasn’t able to get many shots off after the ten second par time on either pistol. Reloading micro-compact pistols is more difficult and significantly slower than full-size duty pistols. The end result was that I squeezed out a higher score using the Hellcat OSP due to its greater magazine capacity. You can watch the video for yourself here: https://youtu.be/CQOVefALIyA

It ate everything up no matter what it was fed: 124-grain hollow points, 115-grain full metal jacket, 135-grain round nose, 147-grain flat point, and even some 77-grain solid copper loads. The Hellcat ran through everything thrown at it. Grand total: Approximately 1,200 rounds without a stoppage.

Is the Springfield Armory Hellcat OSP worthy of trusting your life and the lives of your loved ones? You bet. I have no problem with this recommendation whatsoever. As a matter of fact, Springfield Armory got a check instead of the Hellcat back in the mail.