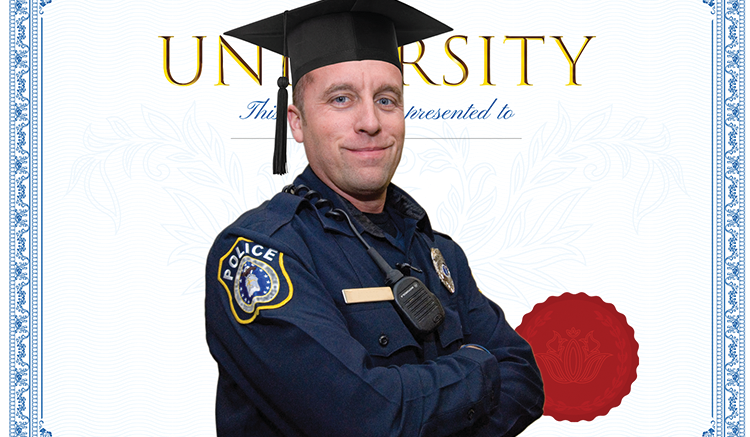 A quality college education can offer the highest return on investment for police agencies.

The late sixties was a time of great political and social unrest. Racial tensions were high, Vietnam War protests were raging, and the lack of connection between police and their communities was the topic of the day.

On July 28, 1967, President Lyndon Johnson appointed the National Advisory Committee on Civil Disorders, also known as the Kerner Commission. One of the many observations made by the Commission was that the community and the police were separated by mistrust, misinformation and prejudice. As a result, the Law Enforcement Assistance Administration released federal funding for better training and education of police officers. Although not mandatory, it was recommended that all police officers have at least a two year college degree. The time was 1970.

Forty-five years later, we are still asking the same questions: Does a police officer need a postsecondary education or is it sufficient to have in-service training focused on critical topics? The short answer is: Both are needed.

Agencies absolutely need to ensure both sworn and civilian employees receive up-to-date information on critical topics through in-service training. Most agencies do this and have found all types of training modalities to accomplish it. However, there is not the same widespread support for college education. While studies over the past many years have established the benefits of a college-educated officer, they haven’t quantified how much better the college degree makes the officer.

The College-educated Officer: A Profile

In 2010, Jason Ryberg of Michigan State University wrote an article entitled “The Effect of Higher Education on Police Behavior.” Based on his research, it points out an important fact: Police behavior regarding arrest and search show no significant difference when considering college education. Officers with a college education and those without behave the same. The author points out that there is little discretion in making arrests or conducting searches, since both are governed by law and court decisions. However, these are just two of the areas in which police utilize discretion.

The Michigan State study looked at another area of discretion: use of force. The conclusion was that, although higher education has little influence on arrests and searches, a college education significantly reduces the likelihood of force occurring.

Since use-of-force cases account for many police disciplinary issues, the next step is to look at discipline cases of college-educated officers versus those without a degree. According to a 2006 report by USA Today, “In an analysis of disciplinary cases against Florida cops from 1997 to 2002, the International Association of Chiefs of Police found that officers with only high school educations were the subjects of 75 percent of all disciplinary actions. Officers with four year degrees accounted for 11 percent of such actions.”

“Up until now, the studies have been much more anecdotal, indicating that education may matter,” said William Terrill, an associate professor of criminal justice at Michigan State and a coauthor of the Ryberg study. “We found that a college education significantly reduces the likelihood of force occurring. The difference is real. It truly is because the officer was more educated, not because the suspect was more resistant.”

“There’s so much more discretion with the use of force and more room for biases to play out,” Terrill said. “High school-educated officers are more apt to say, ‘I’m the law and I have the authority to make you do it, and I’m going to put my hands on you and make you do it.’ Officers with a four year degree are more skilled at resolving problems without having to resort to force. They’re giving the citizen alternative means of compliance. They’re not just relying on the stick.”

Although studies on this topic have been both scarce and mixed, there is general agreement on several fronts. They agree that college-educated officers tend to:

Is Experience as Beneficial as Education?

Some studies have pointed out that the desirable characteristics of a college-educated officer are also found in the experienced officer of 11 years. Experience and education, it has been concluded, have a similar effect on police behavior, but experience takes longer to accumulate, and mistakes may be made along the way.

“Irrespective of experience, college is going to give you bang for the buck right out of the gate,” Terrill said. “By having an education, you’re actually speeding up the process of experience and you’re getting the effect of better policing in the form of less force.”

We decided to conduct our own research on this topic and evaluated education levels of officers in the state of Florida. Using the Automated Training Management System (ATMS) records for March 30, 2017, we found the educational information of all sworn personnel in the state which included all law enforcement, corrections and correctional probation officers:

This summary shows that almost two-thirds of Florida officers lacked any college degree. (It should be mentioned that all correctional probation officers need at least a bachelor’s degree to apply.) The data also indicates that, when an officer pursues an associate’s degree, he (or she) is most likely to continue to the bachelor’s degree level.

The Florida Department of Law Enforcement further breaks down agency requirements for hire into categories, two of which deal directly with education. By looking at these agencies in separate categories, we can get a better idea of how police agencies, sheriff’s departments and state agencies in Florida recruit and promote their staff:

The Availability of College Education for Police Officers

Twenty years ago, officers were typically dependent on what was available in their own backyard. Community colleges were usually an option and, if the officers were lucky, they had access to a state university within a reasonable driving distance. Some had private universities in their areas, but, if tuition exceeded an agency’s reimbursement policy, it was difficult to justify the extra expense.

Today, such physical barriers have been removed thanks to the prevalence of online learning. Officers can now access high quality, cost-effective education from any computer. Many can even complete coursework from an agency computer; even the MDT in a patrol car provides an officer access to an online classroom. While some universities, such as American Military University, are based on an online delivery system, other colleges, such as Daytona State College, offer both traditional and online courses. Some of these higher education institutions even accept academy hours as transfer credit which means recruit academy courses can count towards an undergraduate degree.

The question agencies need to ask now is: “Where will our education reimbursement money do the most good?” Agencies and officers need to perform their due diligence to ensure they are getting a proper return on both time and money. It is imperative that the chosen college or university should possess the proper accreditation from one of the six regional accrediting bodies to ensure these sparse resources – time and money – are being well spent.

Developed in consultation with DC-area law enforcement experts and police specialists, and drawn from faculty expertise from six of GW’s schools, the police and security studies bachelor’s degree completion program aims to create more effective professionals, developing problem-solving approaches, as well as communication and leadership skills. Taught fully online by law enforcement and criminal justice experts, this innovative curriculum will empower students to confront crime and rise up the ranks.

The program is fully online so the content and schedule are designed to meet the needs of full-time law enforcement professionals who are balancing a demanding job and family obligations. The program can be completed in just over two years.

Bachelor of Arts in Criminal Justice; Master of Arts in Justice Administration and Public Service

At CSE, small class size maximizes student/professor engagement and one academic advisor is assigned to a student for their whole academic journey.

For the bachelor’s program, sworn law enforcement officers receive a 25% discount and college credit is awarded for police academy training and some in-service training.  Depending on the number of transfer credits, the program can be completed fully online.

For the totally online master’s program, LEOs receive a 50% tuition discount with 30 credits needed for the MA degree – a capstone project is required in lieu of a thesis. Graduates of a number of command levels schools and programs can receive graduate credit.

U.S. News & World Report ranked CSE 14th for 2019 and they have been in the top 25 for the past three years. AffordableColleges.com ranked their program #3 in 2018.

The UC Online Bachelor’s in Criminal Justice program is for those who want a career in criminal justice or crime prevention. The bachelor’s program is 100% online and features a comprehensive curriculum with classes spanning the breadth of criminal justice and criminology to help students prepare for a career in law enforcement, corrections, supervision, security, loss prevention, and public safety by gaining expertise in communication, criminal and civil law, ethics and leadership.

The online Master of Science in Criminal Justice program approaches the study of criminal justice and crime from an interdisciplinary perspective, drawing insight from sociology, criminology, psychology, and law. Designed to achieve core objectives such as learning research skills; knowledge of social science and human behavior; and criminal justice theory, the program was ranked 8th best in the country for 2019 and the School of Justice is consistently ranked among the top 15 Best Criminal Justice Schools by U.S. News and World Report.

Dr. Chuck Russo is the Program Director of Criminal Justice at American Military University. He began his career in law enforcement in 1987 in central Florida and was involved all areas of patrol, training, special operations, and investigations before retiring from law enforcement in 2013. Dr. Russo continues to design and instruct courses, as well as act as a consultant for education, government and industry throughout the United States and the Middle East. His recent research and presentations focus on emerging technology and law enforcement applications, in addition to post-traumatic stress and online learning.

Kevin Duffy is Assistant Chair of Criminal Justice at Daytona State College. He began his law enforcement career in 1973 in central Florida and was involved in all areas of patrol, training, supervision, support services, and special operations before retiring from law enforcement in 2014. Duffy continues to design and instruct courses, as well as act as a consultant for education, government and industry throughout the United States and the Middle East. Through CJ Training, Duffy provides in-service online training solutions to law enforcement agencies.