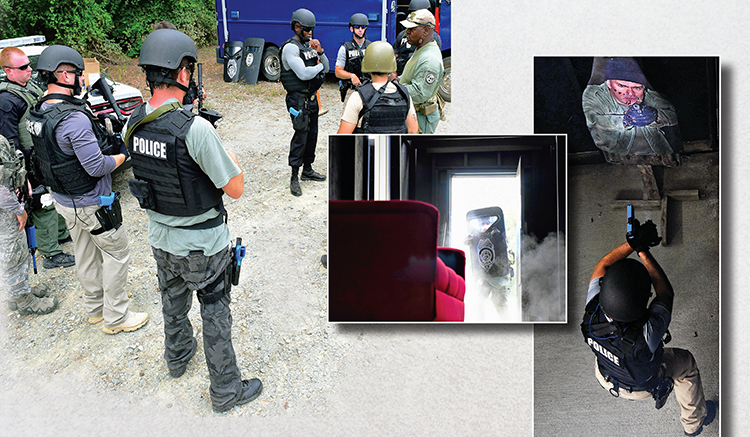 Many agencies have determined that building and maintaining a SWAT team is far beyond their means. However, a solution does exist.

Most everyone knows that the New York Police Department (NYPD), the Los Angeles Police Department (LAPD) and other big agencies have a Special Weapons and Tactics (SWAT) team; in fact, they have several of them and whole support groups which go along with them. What many don’t realize is that most agencies don’t come anywhere close to being as big as the LAPD or the NYPD and, therefore, don’t have the resources to operate their own SWAT team. Over half of the law enforcement agencies in the United States are comprised of 50 officers or less. Sure, 50 officers is enough to facilitate a SWAT team, but does that leave many officers available for other assignments? Yes, but not much. So, what’s the answer? It’s sharing resources. It’s been done all over the nation and, once you overcome the challenges of a shared command and combined resources, it’s a very effective solution.

How Much Manpower Is Needed?

An entry team, if mandated, can operate with as few as six officers. However, that’s a minimum number and leaves no room for losses, leave, etc. Eight officers is generally a better number and, if you have ten, then you can pick and choose which members you’ll need on any given entry (while the rest fulfill other necessary roles). If your SWAT team is comprised of 12 fully qualified and certified operational team members, then you have enough to account for Murphy’s Law.

As a general rule, for every officer you have on the entry team, you need another officer for support. Not only do you need a properly trained inner-perimeter team, but you may also need hostage negotiators, crew to man vehicles as necessary, and more. Even if the vehicles are on scene, but not in use, you need an officer to stay with each vehicle (if at all possible). These support personnel don’t have to be assigned to the special operations unit full time, but they do need to be properly trained and available for call out.

So, let’s assume a minimum six person SWAT team. That means at least six more officers on call and properly trained – for a total of 12. Each of the “support six” should, if possible, be trained and qualified as SWAT officers as well. In the worst of situations, if an officer on the team is taken out of service, this support team is the pool from which you pull your replacement officer(s). Accordingly, if you’re going to pull together a bare-bones minimal multijurisdictional team, you need to plan for 12 members. To get 12 qualified people to meet standards and successfully complete training, you’ll likely need 20 to 25 candidates. If you’re combining agencies to come up with that many candidates, what does the combined agencies’ available sworn manpower need to be? It can be as little as 50, but 75+ is better. You don’t want to pull your operational candidates from a limited pool of “what’s available.” It’s far better to have numerous options rather than the odd assortment of officers whose hearts really aren’t in it, but who want the overtime pay.

The Next Big Challenge

After determining the number of officers you’ll need to form your team and support element, the largest challenge you will face is administrative. The chief executive officer from every jurisdiction involved will want some say in how the team is built, run, called out, and commanded. A special operations team cannot be run by five or ten different “bosses.” The team has to be commanded by a single officer of sufficient rank and, more importantly, one who has earned sufficient respect from all of the chiefs involved in the project. This command individual has to understand the quirks and personality characteristics of all the chiefs involved. He/she has to understand the political challenges which each chief is dealing with and be capable of sufficient diplomacy/tact to accomplish the tasks set forth, balanced against every roadblock which may be thrown up by this myriad assortment of chiefs. That alone is reason why the team command individual needs to have excellent stress management and time management skills. Undoubtedly, the command individual will work more hours toward the team’s development, training and operations than any other team member will.

Even with such an oversight committee arrangement, the team commander should expect to have to go in front of the various governmental groups – city or town councils – to answer questions and keep the politicians happy.  Political leaders will always want to know why their budget dollars are being spent outside their jurisdiction and it’s at that point that the chief involved needs to intervene. The team commander should only ever have to justify his budget requests and expenditures to the oversight committee. When answering questions to politicians, the team commander’s answers should always be about team capabilities, assignments (without compromising confidential information) and the obvious ongoing benefits of the team’s existence.

A lot of oversight questions and misunderstandings can be avoided through the proper development of team establishment documents. Perhaps the very first document which should be created is a Memorandum of Understanding (MoU) that is signed by the chiefs of all of the potentially involved agencies. This first MoU authorizes research and development of concept and specifies what deliverables there are. Such a task is usually undertaken by the presumptive team commander, although that role doesn’t really exist at that time. There should be a deadline set by the MoU for when all deliverables should be completed and should specify that one copy shall be provided to each chief who has signed the MoU. That list of deliverables/development report should include:

Beyond that initial research and development document, the TCTB should be prepared to offer recommendations, in writing, with justification.

This process should detail specific physical performance requirements and include a fitness test with as many applicable objectives as possible. In other words, instead of having a certain number of push-ups, sit-ups, etc., it should have climbing a fence, going through a window, dragging a dummy, carrying X amount of weight, etc. If a height to weight proportion is going to be specified, it should be listed as a maximum body fat percentage or cite another widely used and accepted standard, i.e., a published military table of height/weight/age standards. A recommendation for demonstrated shooting ability/expertise should be detailed (many agencies require their SWAT officers to shoot 90%, or better, on regular qualification courses). Other factors which may be listed and considered are academy standings, time in service and prior military service. The attractiveness of such standards can vary from region to region and should be tailored by the TCTB to suit what is most accepted in his area. No mention of gender, race, age, etc. should be made and none should be considered when selecting potential members. Delineate the standards and accept all applicants who meet the standards without prejudice. This is the only impartially defendable way to select the team members.

Note the training requirements for each candidate after selection has been completed, where such training is available and what cost is attached. It behooves the TCTB to remember that even “free” training isn’t free as there are costs attached to mandatory equipment which might need to be purchased, training ammunition, additional labor costs to replace the officer(s) who attend the training, etc. It should be noted that the training is neither optional nor complete with a given course. Every operational SWAT team develops its own protocols and the team – both primary and secondary/support – has to be trained on a regular basis in those protocols, as well as practicing and maintaining basic skills. Additional specialty schools may be necessary, depending on how complete the basic SWAT school is which is being attended. Courses on breaching, precision shooting, hostage rescue, etc. may need to be accounted for, even if it’s not in the first year or initial costs. As the team’s competencies grow through additional training and experience, the long-term value of the team continues to grow beyond the initial costs.

Develop a general list of desired/necessary equipment which needs to be acquired as budgets and opportunity exist. This list should include personal protective equipment such as body armor, gas masks, helmets, gloves, etc. Uniforms and patches are potentially low cost items, but shouldn’t be overlooked. The TCTB cannot ever be perceived as “lowballing” or hiding some expense in an effort to make the team concept look more attractive. The documents must be complete and forthright without the appearance of wasting funds. This list of equipment should include specialty vehicles with potential uses and justifications for each. The list should include specialty equipment such as breaching, medical and night vision equipment. The list should also include any weapons which would need to be purchased and training for the proper use of such.

If approached reasonably and with thorough documentation from the onset, a multijurisdictional team can be justified and created with less follow-on headache. Once the paperwork is complete, the t’s are crossed and the i’s are dotted, the team can be stood up, member selection can begin and…about six months later, the team can actually become functional.

Now, after reading all that, the question becomes, “Who will be the team commander-to-be who takes on the seemingly daunting task of doing the work to create that research and development document?” The answer is easy: He/she is the person who thought, “I can do that,” and started thinking about how he/she can accomplish each step as he/she was reading this article.

Joshua Logan began studying active shooter and mass attack events after the attack at Virginia Tech and commensurate with receiving training on response and recovery to natural disasters and civil disturbances. Joshua began writing for the emergency response community in an attempt to identify and share commonalities in attacks and response protocols. With five years in uniform (so far), he continues to study response and preparedness protocols for the purpose of identifying needed response updates.