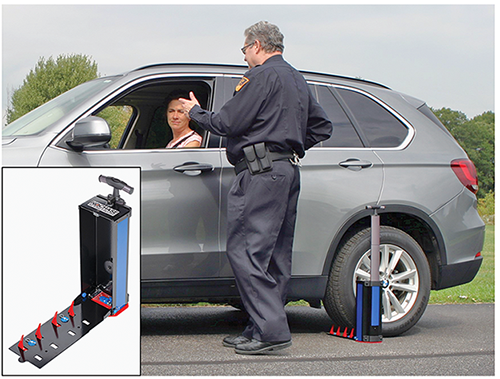 NOCHASE, LLC has released its new tool for law enforcement, The NOCHASE Spike System. It is a proactive, durable, handheld deterrent for use in routine stops and tactical ops to literally “Stop the Chase BEFORE It Starts™.”

At a routine traffic stop, the officer approaches the vehicle; deploys the NOCHASE with a downward hand-thrust motion, placing it in front of the rear tire; and then continues on with the traffic stop. If the driver tries to drive away before being signaled by the officer, the ¼ inch thick steel teeth are imbedded in the tire, puncturing and shredding the tread and sidewall. As the rear wheel turns, the teeth and steel plate are forced up into the wheel well causing further damage and limiting drivability.

It is common practice for the officer to first inform the driver that a device has been deployed and that, if they move their vehicle, it will cause extreme damage and for the driver to acknowledge it; preferably, all of this recorded by a body-worn camera.

The proprietary breakaway hinge pin system on the NOCHASE device ensures that the main box and handle drop to the ground without becoming a projectile. The suspect’s ability to drive off is hindered and the officer can more effectively control the situation before it can escalate into a high-speed chase. This helps to ensure the safety of the officer, the community and even the occupant(s) of the stopped vehicle.

The tactical version is ideal for use in drug raids or other high intensity situations where multiple vehicles may be around a suspected building. Officers preemptively deploy the NOCHASE units next to the vehicles and then the team proceeds with the raid. Any suspects attempting to flee the scene can be quickly detained as their vehicles have been effectively disabled.

The compact NOCHASE device weighs approximately eight pounds; can be deployed on either the driver’s or passenger’s side; and can be deployed thousands of times, at every stop. If parts are damaged though an attempted drive-away, all key components are replaceable, so that the unit can be quickly returned to service. Please visit our Web site at nochase.net.