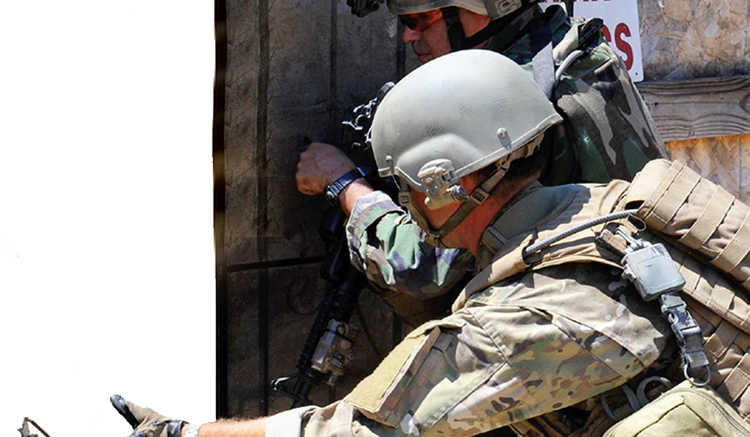 NFDDs are designed to produce dramatic pyrotechnics which are intended to provide a brief distraction without causing permanent injury. Although often used generically, the term “Distraction Device” is a registered trademark of Safariland®/Defense Technology®.

NFDDs may be divided into two categories – those that only produce light and sound and those that also eject either chemicals (OC/CS) or projectiles (rubber pellets). An example of the latter would be the Stingball Grenade. The term “flashbang” is typically applied to flash/sound only devices.

A Brief History of NFDDs

Although the US military has used grenade simulators for more than 60 years, the Operations Research Unit of the British 22 Special Air Service (SAS) Regiment is credited with the development of the first modern NFDD in the early 1970s. The SAS also developed and refined the tactics for the employment of NFDDs. The first documented operational use of a NFDD was by Israeli commandos during Operation Thunderbolt to rescue passengers of a hijacked Air France jetliner at Entebbe, Uganda, on July 3, 1976.

US law enforcement agencies adopted NFDDs from the military. The Los Angeles Police Department D Platoon (SWAT) was one of the first U.S. law enforcement tactical teams to employ NFDDs. The LAPD®’s first flashbang was a M116A1 Modified Hand Grenade Simulator which was modified by the LAPD Bomb Squad.

Although NFDDs have proven to be of extremely low lethality over many years of tactical use, several deaths have been attributed to their use.

In 1984, a Los Angeles, California, woman was killed when a flashbang went off between her back and a wall. In 1989, police in Minneapolis, Minnesota, conducted a drug raid at the home of an elderly couple after a bad tip from an informant. The flashbangs used in the raid set the home on fire, resulting in the death of the couple from smoke inhalation.

In 2003, a woman died from a heart attack after police deployed a flashbang at her residence in Harlem, New York.

In 2011, a 28 year veteran Charlotte-Mecklenberg, North Carolina, SWAT officer was killed when a flashbang went off in close proximity to his torso. Also in 2011, a man died in a fire which was apparently sparked by a flashbang deployed through a window during a raid of the home in Greenfield, California.

In Kirk v. Watkins, the United States Court of Appeal for the 10th Circuit stated that “[t]he use of a flashbang device is neither per se objectively reasonable nor unreasonable. The reasonableness of its use depends on the facts and circumstances of each case.”

In Boyd v. Benton County, City of Corvallis et al, the United States Court of Appeal for the 9th Circuit held that the use of a flashbang while executing a warrant may constitute excessive force under the Fourth Amendment. The Court stated, “…given the inherently dangerous nature of the [flashbang] device, it cannot be a reasonable use of force under the Fourth Amendment to throw it ‘blind’ into a room occupied by innocent bystanders absent a strong governmental interest, careful consideration of alternatives and appropriate measures to reduce the risk of injury.”

A sound legally defensible policy and proper training are key to the safe and effective employment of NFDDs. Most of the injuries which occur are the direct result of operator error which can be linked to a failure in training. Proper training not only saves lives, it’s your first line of defense in court.

A municipality may be held liable for a violation of rights which results from a failure to adequately train its employees if that failure represents a deliberate indifference on the part of the municipal policy.

In City of Canton, Ohio v. Harris, the United States Supreme Court stated, “Failure to train may be fairly said to represent a policy for which a municipality is responsible and for which it may be held liable where injury results, if in light of the duties assigned to specific officers, the need for more or different training is so obvious, and the inadequacy so likely to result in the violation of constitutional rights, that the municipality can reasonably said to have been deliberatively indifferent.”

Although there certainly isn’t anything which compares to reality, realism cannot be replicated in a training environment. As such, the goal in training must be realistic simulation. For training to be meaningful, it must be as close to reality as possible.

Standard NFDDs are expensive and impose restrictions on the training environment. In years past, this led to many agencies employing expended flashbangs which were painted or taped blue for recognition during training.

In the inert category, Ring’s Manufacturing (blueguns.com), the originator of BLUEGUNS® firearms simulators, makes two BLUEGUNS flashbang simulators – the FSFBTS (a detailed replica of the CTS 7290) and the FSFBT (a detailed replica of the Defense Technology No. 25). Ring’s also makes the FSBBG Baseball Grenade which replicates the military M67 fragmentation grenade.

Ring’s BLUEGUNS products are made with strong, impact-resistant polyurethane with metal reinforcement. The flashbang simulators are inexpensive and last practically forever. They have a functioning pull pin, but obviously lack any “bang.”

Pyrotechnic NFDD training devices which are presently available in the US fall into two categories: traditional fuzed and Blank-Firing Impact Grenade (BFIG). BFIGs contain a mechanism which is designed to fire a blank cartridge when the device is deployed from a height of about one meter onto a hard surface

Except for the special fuze and blue color, the fuzed training flashbangs (and training Sting-Ball) by ALS, CTS and Defense Technology are identical in appearance and weight to the companies’ operational flashbangs they are designed to replicate. This makes them very popular with agencies which employ those companies’ less-lethal products.

The ALS TRMR-LE Training Device has a body which can be reloaded up to 250 times with the ALS1208 12-gauge Bore Thunder cartridge. The body of the TRMR-LE incorporates a safety button which must be engaged to twist the top section to arm which functions similarly to a standard firearm safety. Upon deployment, the device’s kinetic energy causes the wobble top to move and drive the firing pin into the primer of the cartridge. The TRMR-LE has been safety tested to withstand a ten foot drop (in the safe position).

After deployment, the base is removed to expel the spent cartridge, reloaded and reassembled for the next use. Bore Thunder cartridges produce approximately 172 dB at five feet. The TRMR-LE can be configured as an irritant/marking powder dispersal system using a .68 caliber ball, such as a PepperBall from United Tactical Systems (UTS). The TRMR-LE is available in a range of colors (including training blue) to suit different mission profiles.

Royal Arms International’s FBG-MkIII NFDD Flash Bang Trainer is based on the company’s FBG-MkII with a number of enhancements. The FBG-MkIII has a reloadable body designed to be used with Royal Arms 12-gauge FBC Flash Bang Cartridges or standard 209 shotshell primers using the included adapter. The FBG-MkIII is hand deployed in the same manner as a traditional flashbang.

The FBG-MkIII incorporates a pull ring and spoon (“fuze” handle) for safety. It also employs a wobble top which utilizes the kinetic energy from impact to drive the firing pin into the primer. According to Royal Arms, the FBG-MkIII may be reloaded an unlimited number of times. The FBG-MkIII is available only in black.

The FBC Flash Bang Cartridges produce 175 dB at five feet. The 209 primers produce 118 dB at five feet and are definitely the most cost-effective way to conduct NFDD training, running only around five cents each.

Most of the non-pyrotechnic devices on the market were originally developed for Airsoft and paintball. While some of these do work for training, I recommend going with a training system/device which was specifically developed for tactical training, such as the Defense Technology Low Roll Training Simulator which is a reloadable pneumatic simulator.

The Low Roll Training Simulator has a pneumatic fuze and does not produce any flame, spark, light, heat, or damage to the deployment environment. It produces 130 dB at five feet and is sold in a complete starter kit containing two bodies, a filling station, end caps, pull rings, and replacement fuze handles.

All of the devices mentioned in this article are loud enough for effective training, but not so loud as to mandate hearing protection (except for the 12-gauge blanks). This makes them ideal for role-playing, scenario-based/force-on-force training. Operators don’t need to be subjected to unnecessary hearing damage or overpressure. Plus, training can be conducted in more locations than would be possible with a higher dB output.

To sum it all up, realistic NFDD training has never been more affordable. Today’s NFDD training options allow teams to train more often, in more places and with much greater safety than has been the case in the past.

Eugene Nielsen is a private consultant and a former police officer.