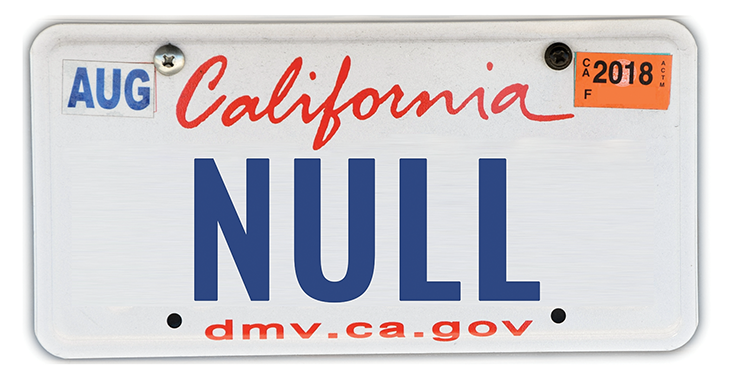 Maybe he should change his phone number to 867-5309… In California, a man came up with a brilliant idea to hide his car from license plate readers and ticketing systems: registering the vanity license plate “NULL.” He hoped his NULL license plates would make it impossible for cops to give him a ticket, since they wouldn’t be able to enter the ticket into their system. His plan worked all too well. It caused a citation processing center to send him $18,000 worth of parking tickets. When a ticket is entered into the system for a car with unknown license plates, the field on the form reads “NULL.” Since there was suddenly a car registered with those exact plates, $12,000 worth of unpaid tickets all got mailed to him. The DMV eventually dismissed the fines, but since he’s still using those plates, he has already amassed another $6,000 worth of other peoples’ tickets. (Play stupid games; win stupid prizes.)

Make sure to check the VIN number on that vehicle… In Ohio, police are searching for two men who fled a traffic stop involving an Amish buggy. A deputy in Trumbull County reported seeing two Amish men drinking as they rode on the back of the buggy. When the officer spotted a 12-pack of Michelob ULTRA® inside, he tried to get the driver to stop. The men jumped out and ran off into the woods while the horse continued to pull the buggy before eventually stopping. The deputy found several open containers of alcohol and a “radio sound system” which included several large speakers. The buggy was towed and the horse is being cared for by a nearby resident until someone claims the animal. (On a positive note, they had a “self-driving vehicle.”)

This is so ridiculous that it’s criminal. Oops, I mean “justice-involved”… Ever sensitive San Francisco is giving ex-cons, juvenile delinquents and drug addicts new monikers, thanks to the Board of Supervisors’ new “person-first” language guidelines. For example, someone just released from prison will be a “justice-involved person”; a repeat offender will be a “returning resident.” People on probation will be “persons under supervision.” The under 18 criminal crowd will be known as “young people impacted by the juvenile justice system.” Words such as “convict” and “inmate” “only serve to obstruct and separate people from society and make the institutionalization of racism and supremacy appear normal,” the board’s resolution reads. (Yeah, and the 1906 San Francisco Earthquake was a “community remodeling project.”)

Wait a minute – that’s not dandruff!… In Madrid, Spain, customs officials were doing their job of checking passengers on an inbound flight from Bogota, Colombia. An inspector noticed that one of the passengers had an unusual hairstyle. The man’s coiffure was a very tall pompadour, something like you would have seen on a young version of Elvis. The inspector investigated the matter and found that it was not the man’s real hair, but a toupee. The wearer was not trying to cover up a bald spot, but was instead covering a half kilo of cocaine which he had glued to his head. Customs reported that the traveler was trying to hide $34,000 worth of cocaine under a wig. (Hair today, jail tomorrow)

He should be sentenced to wear mittens in public… A Pennsylvania state appellate court has ruled against a man who was convicted in a lower court for disorderly conduct in 2018 for pointing his finger like a gun at a neighbor. Earlier that year, the man was reportedly walking past a neighbor’s home in Manor, Pennsylvania, when the neighbor made an obscene gesture with his hand. He responded by making a shooting gun gesture with his own hand. A witness called 911 and the unnamed neighbor told police he felt “extremely threatened.” The man argued that his gesture was not a hazard, but the appeals court disagreed. (I guess the exploding fist bomb is now considered a threat of terrorism.)

As he was being processed, the arrestee was overheard asking if the bail bondsman would take cash… A trash collector in Limestone County, Alabama, noticed something unusual in a trash pickup outside a man’s residence. The large trash bags were filled with printed paper. The garbage man took a closer look and found the sheets of paper were actually printed $20 bills. The resident of the home apparently intended to run a counterfeiting operation and had conducted a test to get his fake bills just right. The bags were turned over to the police who discovered that the man was also somewhat of a recycler. One of the fake bills was printed on the back of an Alabama Pardons and Paroles receipt issued three months earlier. Police booked him on felony counterfeiting charges. (Does Limestone County mandate clear garbage bags?)

Where was she when I was in school?… In Evans, Louisiana, a 52-year-old woman was charged with filing false public records after it was discovered that she was writing fake doctor’s notes for high school students so they could get out of class. The woman, who worked at a medical clinic, charged $20 for each excuse, according to the Vernon Parish Sheriff. He also said it was common knowledge among students that the excuses were for sale. The woman’s fraud came to light when someone from the Vernon Parish School Board called a doctor about the notes which he denied having authorized. (School authorities should have known something was amiss when all the notes were signed by Dr. Phil Goode.)

Now we know who flung poo… A 49-year-old Oregon man who targeted his former friend with an improvised dog poop bomb avoided prison and was sentenced to three years of probation. He admitted to filling a plastic toolbox with dog feces and timing it to explode when the victim opened it. He put the device on the back of a Camaro owned by a former buddy. When it exploded, it sounded “like an M-80 going off and the dog doo was blown out of the toolbox,” investigators said. The friend wasn’t hurt. The pair had a falling out when the accused believed the friend had no intention of giving back some tools he borrowed. (Nothing says “give me back my stuff!” like an exploding toolbox full of dog doody.)