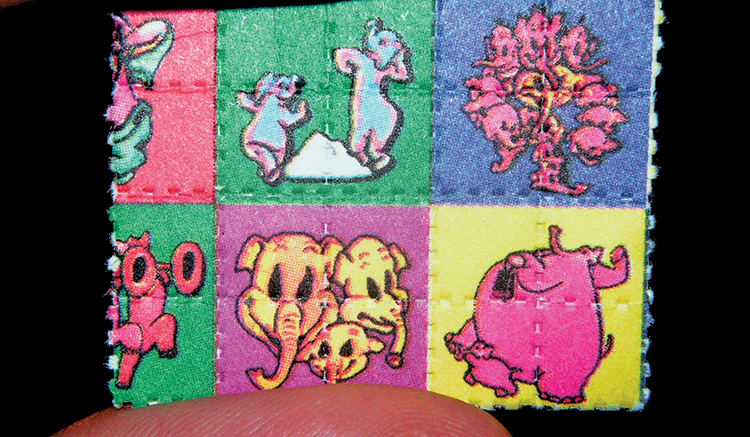 Okay, this is almost full disclosure.

A couple of years ago, a close family member confided in me that they had taken LSD at some point in their young life. A year later, a second family member admitted the same thing. I was flabbergasted. LSD? The stuff which made Art Linkletter’s daughter jump out of a window because she was convinced she could fly? That stuff?

No, I was told, this is not – in essence – your father’s LSD. In truth, I was told, the stuff had become so refined, so engineered, that there weren’t those “bad trips” and that kind of stuff happening anymore. What could I say? These people – people whom I love – were smiling and telling me that it was okay and that I had nothing to worry about.

What used to be called illicit drug use by my generation is considered by the newer generations as an accepted standard. Whether we like it or not, more and more states are acquiescing to the idea that they cannot stop illegal drug use – at least, where marijuana is concerned – and have legalized it on either a medical or recreational scale. It appears as though the generations with which we have endowed with our “torch” are embracing the idea that narcotics use has a place and that we shouldn’t stress it so much. They’re using the torch to light up. The “war on drugs” has entered into a peace treaty. Nancy Reagan’s “just say no” has become, “just say ‘whatever.’ ”

Part of this could be attributed to the proliferation of “designer” or “homemade” drugs. The standards we could always identify – cocaine, heroin, weed, amphetamines, downers, and LSD – have been crowded out by so many new players in the field of mind-altering substances that they are almost an afterthought, though they are still pretty popular. The various opiates, psilocybin (the mushroom derivative), meth, and other lab creations which people have cooked up with ingredients you can get at The Home Depot®, have become so varied that our nation’s statute books are having trouble keeping up with what’s legal and what isn’t. Heck, here in Florida, the attorney general put out a bulletin a few years ago that the most widely abused drugs by young people are prescription drugs which the kids are getting from mom and dad’s medicine cabinets.

But, none of this quest for a buzz is anything new. In the book, Stealing Fire, authors Steven Kotler and Jamie Wheal point to 415 BC Greece and a sacred elixir called “kykeon” which apparently had some pretty wild effects on Athenian partygoers. The Greek historian Plutarch wrote that, in less than an hour of drinking the stuff, the user experiences sweats and terrors, but soon after passes into “delightful meadows” and is “impressed with celestial visions.”

Kotler and Wheal go on to say that mankind has always pursued the ultimate buzz. Whether it’s for celestial visions or for peak performance, it has not been beyond the reach of CEOs, athletes and even soldiers to use enhancing substances to achieve superiority in the boardroom, the arena or the battlefield. There has long been proof that, in WWII, both the Germans and the Japanese used early versions of methamphetamine to move faster, fight without rest and maintain a feeling of invincibility.

Alcohol has been a mainstay in almost all cultures since written history. It’s talked about in the Bible countless times and especially in the story of the wedding when water was changed into wine. Native Americans have been using peyote way before the Europeans arrived on the continent. It doesn’t appear that there was ever an “innocent time” in our history when we humans didn’t want to party hardy. Remember the scene in the presumably innocent movie, The Wizard of Oz, when the wicked witch puts Dorothy and her buddies to sleep? What does she use? Poppies, the opium plant! And, what does the good witch use to wake them up? Snow! They couldn’t say it outright, but the creators of that movie sure wanted to let us know how cool Hollywood was in the 1930s and that heroin and cocaine were alive and well at elite gatherings. And, speaking of the 1930s, how long did Prohibition last?

So, what does all of this mean for us in law enforcement? It’s really not enforcement that’s a problem: You catch someone with cocaine, you make an arrest. The courts do whatever they do and that’s that. What is really the challenge – and has always been the challenge – is the encounter itself. The real danger of drugs for us is dealing with the drugged up person: Having to handle someone on meth or coke presents an extremely dangerous and unpredictable scenario. If you’ve been in uniform any length of time, you might have had to fight or struggle with someone who was coked up or on meth – it’s not fun. They don’t feel pain and they seem to have endless stamina. It wasn’t uncommon in the “freebase” days of the ’80s for us to need an entire squad to arrest one 5’9″ guy who was flipping out. Then, they died of “cocaine psychosis” (which is really just a heart attack from an overwhelming amount of adrenalin overworking the cardio system) and it looked like some horrible police brutality incident. It happened many times in those days.

The legality or illegality of drugs really doesn’t matter: It’s quite clear that people are going to use them anyway. Our constant concern is being prepared to deal with the erratic, often violent, behavior.

I’m writing this on December 7th, 78 years after the skies of Pearl Harbor were filled with meth-stoked Japanese pilots, bombing the crap out of our Navy, and being so juiced up they didn’t care if they died or not. Yesterday, here in south Florida, two robbers hijacked a UPS truck with the driver in it, taking him hostage. A wild chase ensued and police officers from several agencies ended up in a chaotic gun battle with the robbers in the next county. None of our brothers or sisters in blue were hurt. Both robbers were killed, but so was the hostage and an innocent man in an adjacent car who happened to get caught in the crossfire. As you can imagine, the news and social media is all abuzz with criticisms and second-guessing how the police should have done this and that. We don’t know yet, until the autopsies on the bad guys are done, whether drugs were in their system, but it wouldn’t come as a great surprise if there were.

I’m working a case right now (I still do the PI stuff from time to time) to help a family and their lawyer determine if their son killed himself in a suicide, or whether he was killed by two guys who were with him. One thing we do know from the tox report: He had six different narcotics in him, including cocaine and morphine.