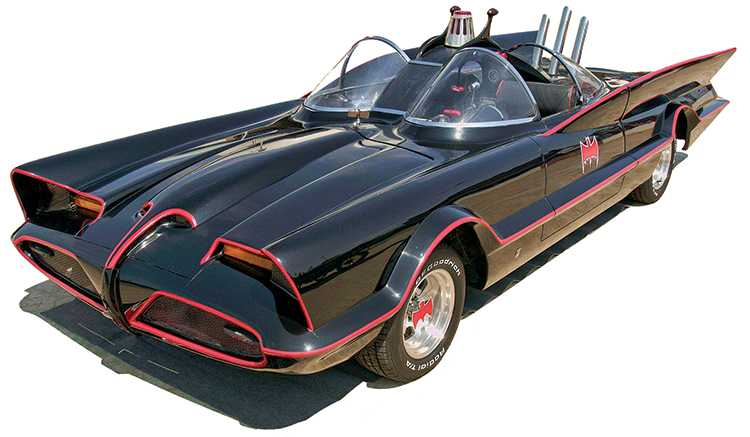 “Dude, you can’t outrun the Batmobile”… A man in Burtonsville, Maryland, drives a highly recognized vehicle: a custom-built 1966 replica of the Batmobile, complete with rocket launchers, jet flames and a bat phone. When a hit-and-run driver smashed into his prized car on Route 28, he wasn’t about to let the driver make a getaway. “I don’t know what the guy was thinking,” he told a TV reporter. “He must have been going about 60…and just slammed into the right rear corner.” When the driver failed to pull over, the man called 911, then gave chase, eventually pulling into a church parking lot, where the driver agreed to give him his insurance information without getting the police involved. (How did this turn out? Find out next week – same Bat-time, same Bat-channel.)

What an appropriate gift for the politicians in Washington, DC… TSA agents at Juneau International Airport spotted a “large organic mass” in a traveler’s carry-on bag. However, when agents opened the bag, they found a plastic grocery bag full of moose “nuggets.” The passenger told the TSA officers that he collects them and likes to present them to “politicians and their #@$%+ policies.” The passenger was not detained and was allowed to continue on with his bag of moose poop. Later, an Anchorage newspaper reported that a man was seen at the state capitol, handing out baggies of moose nuggets in protest of the Governor’s proposed budget. (Holy Bullwinkle, Batman!)

I doubt these idiots could even manage to break into a song… In Okaloosa County, Florida, two masked criminals entered the boardwalk on Okaloosa Island, whipped out a blowtorch and went to work on the ATM. But, the criminal act didn’t go as expected. Instead of cutting into the machine, the torch welded the metal parts of the locks and hinges shut. Duh! After it became apparent that they were going nowhere fast, our incompetent thieves packed up their tools and left. Police have good surveillance camera pictures and are expecting to make an arrest, shortly. (It’s safe to say that they both got burned…)

Was she drinking from a sippy cup?… In South Carolina, a 25-year-old woman who officers said was driving drunk was not cited with a DUI because her vehicle of choice was a toy truck. But, Walhalla police said they did charge the woman with public intoxication. Police had spotted her cruising down the road in a Power Wheels® electric toy truck after a caller reported a suspicious person. Officers said she was driving about one mile from her home in Walhalla when they stopped her. (How often do we see police pursuing a person who is suspected of DUI on foot?)

A real vehicle theft or an elaborate marketing hoax? Hmmm… Someone in Charlotte, North Carolina, stole a van from the “Unknown Brewing Company,” covered with big neon colored logos for the establishment painted all over it. The brewery posted a picture of the stolen van on social media, along with an offer to throw a free “keg party” for anyone who found it. Almost immediately, tips started to “pour” in, with a photo of the vehicle’s whereabouts being posted within 42 minutes. A woman called police and offered to park her car in front of the van to block it. Police recovered the van and said that it had been hot-wired by professionals. In honor of the van’s safe return, the brewery is offering up a new beer, “Van Theft Auto,” which it sells for 25 cents a pint to celebrate. (This demonstrates the power of social media – and bribery.)

You might want to take notes as you try to follow me here… A homeowner was asleep around 1:40 a.m. in Cocoa, Florida, when, suddenly, a black Cadillac crashed into her garage, missing her by only inches. The Cadillac had been stolen and the thief was fleeing an Orange County Sheriff’s Office patrol vehicle which had also been stolen and was being driven by someone impersonating a police officer. A local TV station reported that, after the crash, the phony police patrolman continued trying to pull over vehicles before speeding away. The stolen patrol SUV was later found abandoned behind a shopping plaza. (I wonder if the trial will be presided over by a real judge?)

Sending him to the school principal’s office was clearly not an option… While students at Holy Family Catholic School in Port Allen, Louisiana, were enjoying a field trip to Washington, DC, their 47-year-old principal was more interested in a different form of sightseeing. Police were dispatched to Archibald’s Gentleman’s Club in DC after “an intoxicated man refused to pay his bill,” according to the arrest report. Officers reportedly found the principal standing in a roadway, “refusing to move.” He was arrested for public intoxication and possession of an open container of alcohol. He immediately resigned his position as principal. (The 13-year-olds were the responsible ones on this field trip.)

This robbery didn’t pass the smell test… Two geniuses decided to rob a bar in Winona, Minnesota. Their plan had them dressing all in black and covering their faces with bandanas and ski masks. They concealed their weapon inside a paper bag. The two waited until the bar was about to close and grabbed the manager when she went outside for a smoke. But, one of the thieves dropped a box containing the night’s cash receipts. This emboldened a patron to get in the face of the other robber, causing him to drop his box of loot. Other customers joined in the scuffle, uniting in a real “feeding frenzy.” They managed to partially remove the crooks’ masks and caused their weapon to drop to the floor. As it turns out, they weren’t armed with a gun, but an air freshener. The thieves fled the scene empty-handed. By the way, they were recognized by employees who had spotted them drinking in the bar only 15 minutes earlier. (“Hand over the cash or I’ll make you smell like a freshly cleaned restroom!”)