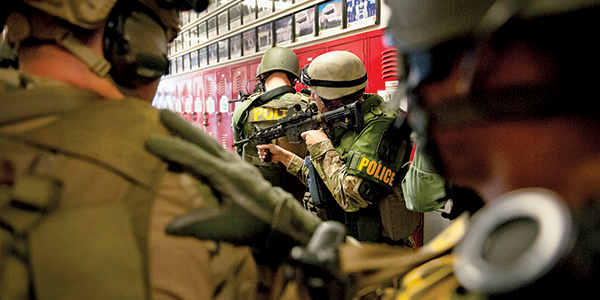 I was an investigator for 22 years in homicide, working death scenes of all kinds, but I’ve never been to a scene littered with the bodies of innocent schoolkids. I’m thankful for that. And, so, on the very day I am writing this latest column, it is the same day that the students, faculty and staff of Marjorie Stoneman Douglas are returning to school for the first time since the shooting. I dedicate this column not only to them, but to my brothers and sisters who had to work that scene – the homicide detectives, uniform personnel and crime scene techs who had to carefully document each body, each spent casing and projectile, and each bloodstain. They will never forget what they saw that day and well into the night, working that horrific scene.

I remember after the Columbine shooting, some local journalist asked the question, “Could it happen here?” I always thought of it as a dumb question because those Columbine victims were our kids, too. Either way, Mr. Journalist, question answered. The Columbine kids and the Douglas kids, they’re all ours; they’re all “here.”

The battle is on again, but this time in a much more robust and intense way. The political haranguing and volleying about gun control and the NRA is at an all-time high. I can only hope, as an optimist, that both “sides” will learn enough about their “opponent” that there are no more “sides” and that, as one of the Douglas parents said so well, “We are not a Democratic party or a Republican party; we are a human party.”

Although I’m not a big gun enthusiast, I like firearms, I respect them and I carried one for 27 years. I’ve got three guns in my house, one of them being my former duty weapon. The other I bought because it’s more concealable and the third one is a .30-06 bolt-action rifle given to me by a client. I have no political axe to grind, although I do feel that the vast majority of citizens are responsible gun owners and shouldn’t lose the right to protect their homes and loved ones. Yes, we certainly need to find a way to keep guns out of the hands of demented and dangerous people, but this is a difficult task, one which will not be affected by the banning of anything, least of all the outlawing of the AR-15. Guns were just as easy to access in the 1960s and 1970s; yet, the only mass shooting of the ’60s was the 1966 Texas Tower shooting in Dallas, when 17 were killed by a sniper (with a bolt-action rifle) before he was taken out by police. There were NO mass shootings in the 1970s, a decade which, ironically, saw a major increase in violent crime in general. Then, in 1982, the wave of mass shootings seemed to begin and, sadly, continues unabated. This tells me that our gun problem hasn’t gotten worse; our people problem has. Larger segments of our citizenry have, for various reasons, become more volatile; less patient; and, sad to say, less sane.

This most current tragedy, as most of us know, is both a school security problem and a mental illness problem. Yes, this all overlaps with the accessibility of firearms, but I believe there are some things we can do right now to secure our schools. For example, physical upgrading, including fences, access checkpoints, better camera technology with early warning (geofence) capability, and recruiting help from retired law enforcement personnel will go a long way in solving the problem – for schools anyway. It is possible that someone could breach such measures, but it’s less likely. The cowards who have carried out not only school shootings, but other attacks such as the Pulse nightclub and Las Vegas shootings, have always looked for the path of least resistance. The experts who have studied mass shootings will tell you that the shooter knows he is up against time constraints and that he won’t take the time to try and penetrate a solidly secured school compound, especially when law enforcement is on the scene.

I’m not a fan of arming teachers. More things can go wrong than can go right when teachers have firearms on their persons or in their desks day-to-day. Some schools have hoodlums attending class and we shouldn’t dupe ourselves into thinking that they won’t concoct schemes to get ahold of that gun, either in the class or when the teacher goes home. There’s also the possibility of an unpredictable teacher losing his (or her) composure with an unruly student or during a violent fight, and brandishing his (or her) gun in a crowded classroom. The chances of an innocent kid catching a round are too high for my liking. No, secure the premises, intelligently and vigorously. This will work better.

In my column which ran in the November/December 2017 edition of P&SN (shortly after the Las Vegas shooting), I talked about defective people. This is the most vexing problem facing society today. We must find a way for our government entities and medical professionals to develop the ability to identify those with serious disorders so they can get treatment and be prohibited from being around firearms. This task is probably the most difficult to achieve because it is so complex. There are legal issues about privacy and mental health, and these issues represent a huge mountain to climb. Something, though, must be done because the shooters in all of these cases, by their very actions, are deeply disturbed people. Still, climbing this mountain will not be the one and only solution because there are many mentally ill people who have not been identified; will never have interacted with mental health professionals; and are simply “out there,” barely functioning among us, until something causes them to snap. As it stands now in Florida, for example, a “background check” conducted during a firearm sale will identify only two factors: 1) if the person is a convicted felon, and 2) if they have been adjudicated by a court of law as mentally ill. Other than that, someone can be “Baker Acted” – taken into protective custody for involuntary treatment and held for up to 72 hours – if they are a danger to themselves and others, but Baker Acts are NOT registered anywhere for background checks to know about them.

Disturbing as it is, this type of tragedy will happen again. Somewhere, walking the ground on one of our 50 states is a deranged person, waiting, watching, listening, and processing everything we are arguing about as a provocation. We might not see it at a school, but, next time, it could be at a shopping mall or some transit station, or at a public park. We can’t secure everything, so the answer is this: We have to find some way to get better – mentally speaking – as a society. There’s no law or Constitutional amendment which will help facilitate that, but maybe Mother Teresa had the right idea, “If you want world peace, go home and love your children.”

Simplistic? Maybe. Idealistic? Maybe. But, if you think about it, it is something we all can do now without anyone passing a law. If everyone really could do that, wow, things would be different.