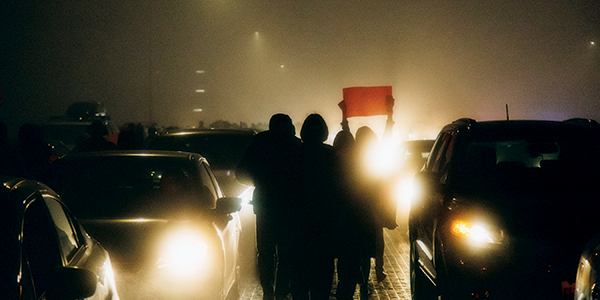 Mercifully, the door has closed on a summer which has been tumultuous, frustrating, violent, and divisive. But, even with fall being just around the corner, I can’t help but get the feeling that all of the anger, rage, mistrust, hatred, and misperceptions have only just begun.

As I write this, there are reports of Confederate statues coming down and being dismantled in the middle of the night, and more vitriol and finger-pointing on social media than I’ve ever seen. I don’t get on Twitter much, but I made the mistake of commenting on someone’s tweet the other day and…wheeeew! There was two hours of intense debate, with other people joining in, and it continued nonstop. I’ve never heard so many interesting claims, boldly declared as if they were long-standing fact. Here are some I read about our profession.

Oh, come on, how can you not know that white supremacists have infiltrated the criminal justice system?

Cops in Bay Harbor (a small municipality near Miami) are known to be pretty racist. (From the same guy): Jews are pretty racist, dude.

We have “Blue Lives Matter” laws for an already protected class.
(We cops are protected? You could have fooled me. How do you explain what happened in Kissimmee, FL, recently?)

The Seattle police are Nazis and have a long history of police brutality.

Let’s be very clear: Euclid, Ohio, has a long history of police brutality.

If the National Guard replaced police, all this #Police Brutality would stop!
(Umm…good luck with THAT.)

If you’re a blogger who blogs about police brutality, the police will illegally track your smartphone for the sole purpose of shaming you. (That’s the new “Cell Phone Shaming Squad,” right?)

Every seven hours, cops kill an American citizen. (Hmm…that’s roughly three killings a day, 90 per month. Are you sure about this? Oh, and for the record, since last night at this time, there have been no police shootings. I’ve been following the news. Which means that, tomorrow, the police will have to kill – KILL – an American citizen every 3.5 hours).

Police have killed nearly 3,000 people since Mike Brown in Ferguson.
(See above.)

Police are killing citizens at the highest rate ever while the government and the media ignore it. (The media’s “ignoring it”? Wow. I can’t wait to see them when they start “covering” it.)

And so on. You get the picture.

Besides all these tweets (and those are just a random few out of thousands and thousands, so the Shaming Squad must be busy as hell), you have Facebook and all of the other places where the experts gather and make their educated assessments about a profession they know nothing about. The tweet which got me embroiled in the two hour debate is discussed in detail in an August entry of my blog which you can read at www.nybergpi.com.

Worse than just the comments, there is now a new formulation about which I have recently been educated. Here’s how it goes. Trump has empowered the Nazis and the KKK, and Trump and the Nazis and the KKK are part of a conspiracy with the police who are apparently infiltrated by white supremacists. (I guess that’s why Dallas, New Orleans and a myriad of other southern cities all chose to appoint black police chiefs.) Regardless of my opinion concerning President Trump, I’m not a fan of many of Trump’s opponents, simply because they are so deeply rooted in hysteria rather than fact. They believe that this immense conspiracy has been brewing ever since Trump’s campaign, so that the current administration can enslave people of color and LGBTQ people and who knows who else. C’mon, just connect the dots, someone tweeted to me.

By the way, I’m a “person of color.” So far, I’ve been pretty safe. No one has thrown a rock at me, blasted me in the face with a homemade flamethrower, or even called me a name. But, I digress. You see, we need to make the world fair. There should be no racism, no hatred and no bigotry. You may recall the recent controversy surrounding ESPN’s removal of an announcer from its broadcast of the University of Virginia’s first football game because he has the same name as a Confederate general. Maybe we should start this “campaign of love” by firing Robert Lee, the man of East Asian background, from his job at ESPN because his name is Robert Lee. Who does he think he is? Yes, let’s get a list of all the names of Confederate generals and then publish it nationwide. If someone in your department has the same name, fire him!! Gosh, I feel better already.

I’m watching and listening with great interest and with genuine pain for this country and for a family member of mine who is deeply involved with the Antifa movement. He gets out to these demonstrations and protests and I fear for his safety, but also for his soul – which I fear can get lost when you get too deeply imbedded in a one-sided, narrowly focused movement.

I hate fascism. Our country – my dad included – fought against it and another one of my family members currently serves in the military. The sight of a Confederate flag is something I am used to, having grown up in the South, but I understand how some people believe that it should come down from government buildings and I have no problem with their opinion. The sight of a swastika, however, greatly offends me. Fascism, though, doesn’t necessarily come from distant shores and angry men with little moustaches. It comes from within, when lost and weak-minded people start to foment a false ideal. It starts when they follow this ideal with such ferocity that, if you dare to even question their beliefs, you become the enemy. These people, who will scream about free speech, start by constructing a language with its own rules and boundaries and you had better conform, or else. Fascism doesn’t think, it just acts. It believes that it can do no wrong because those not in the movement are demonized by the mere fact that they want to think and reason differently. Fascism acts and begins doing things like putting the yellow Star of David on Jews because they are Jews and doing things like firing innocent people because their name – Robert Lee – is something they cannot stand to hear.

God help us. Stay strong and be safe out there, my brothers and sisters. We are NOT the problem.
Ramesh Nyberg retired from law enforcement in November 2006 after 27 years in police work. He now owns his own private investigation agency, Nyberg Security and Investigations, and can be reached at Ramesh@NybergPi.com. Ramesh would like you to visit and read his blog at www.nybergpi.com/blog.html and sign up for his free newsletter. He enjoys getting feedback from readers.