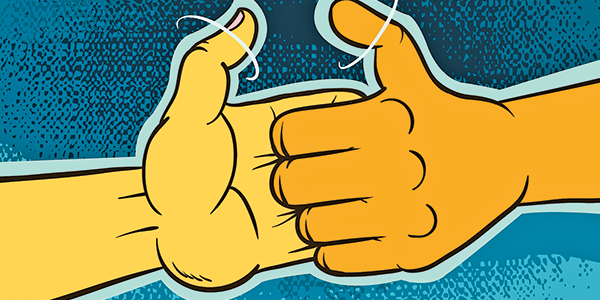 Now, he’s wondering if the judge is up for a spirited match of “rock, paper, scissors!”… A 39-year-old man, who was sound asleep at 6:00 a.m. behind the wheel of his car and with the motor running, was in no position to talk his way out of a DUI arrest. However, he did offer a gentle challenge to a Youngstown, Ohio, police officer. According to the police report, the man offered several times to “thumb wrestle” the officer to get out of the offense. From the report: “[The suspect] was advised officers would not thumb wrestle him.” (“1, 2, 3, 4, I declare a thumb war!”)

Taco ‘bout stupid, this guy is nacho common everyday imbecile!… In Florida, police say a man attempted to bribe an officer with Taco Bell after he was busted with cocaine in his vehicle. An officer stopped the driver of a black Honda and noticed two small bags of white powder in the center console which the man tried to cover with his cellphone before making the proposition of Mexican food. Police said, “When the driver and sole occupant was questioned, he described it as just cocaine residue and offered the officer a ‘hook-up’ on Taco Bell in the future if [the officer] would ignore that stuff.” The officer thanked him for the offer, since he likes Taco Bell, but declined. During a search of the Honda, officers said they found more small bags of cocaine inside. (Remember, seven days without a taco makes one weak!)

Only slightly stupid?… A California reggae rock band named Slightly Stoopid recently produced a vinyl record of songs which was “smokeable.” A rock industry magazine says the records are made out of a “super resinous variety of hashish” mastered at the Los Angeles studio, Capsule Labs, which cost $7000 each. The sound quality of the first two versions was said to be disappointing and were apparently quickly smoked. However, a third is now in production. (I guess they were able to to weed out the technical problems.)

Do you think the price sticker on the cheese wrapper gave her away?… In New Hampshire, police stopped a driver accused of using a cheese wrapper in place of her registration stickers. Alexandria police shared photos of the fake registration stickers she fabricated from a wrapper for “cracked pepper sharp cheese.” The police department said, “We can’t even file this under the ‘A for effort’ category.” Police said the woman could face fines up to $2,400. Her car was towed and impounded until she is able to acquire the proper registration. (I’m sure the Alexandria PD received plenty of cheesy comments; however, making fake stickers is never a gouda idea.)

That’s what happens when you buy a car from Fred Flintstone Auto Sales!… Police pulled a driver over in Val-des-Monts, Quebec, Canada, for driving his 1999 Toyota Tercel without functioning brake lights. But, the officers were surprised by what they quickly discovered. The driver had tried to use an oil soaked burning rag as a substitute for the light. Police also discovered that the car had three bald tires, no windshield wipers and there was an open container of beer inside. The story doesn’t end here – when officers looked under the car, they saw that the man had removed the shocks and had created a makeshift suspension out of logs and chicken wire. The driver was ticketed for the open beer and for various safety issues on the car which was impounded. (Honey! I’ll be outside “sprucing up” the car.)

“Sorry, our K-9 is currently occupied…he and his handler are about to pay you a visit!”… In Bath Township, Ohio, police say a 20-year-old man called 911 to request the services of a police dog to help track down heroin he claimed had been stolen from him. In the recording of his call, the operator asks him why he needs a police dog. He replies that his girlfriend stole money and heroin from him and he wondered if the dog could help recover the drugs. The Bath police chief said it’s among the most bizarre things he’s heard in four decades of policing. But, there’s more – while being interviewed by police, the man reached into his pants and a “brown waxy substance” which appeared to be heroin fell out. He is now facing felony drug charges. (A not guilty plea coming in 3…2…1.)

Never forget – justice delayed is not justice denied!… In Winter Park, Florida, a man stood outside his home and was interviewed live by a local television reporter. The man denied he had committed a crime in a widely reported series of voicemail messages to U.S. Congress members, containing threats of extreme violence. He boasted that “proof” of his having done nothing wrong was that, if he had, he would have already been arrested. But, wouldn’t you just know it, “three minutes later,” according to the reporter, agents drove up and arrested the suspect. (I wonder if he had to speak louder than usual during the interview in order to overcome the noise of the approaching sirens?)