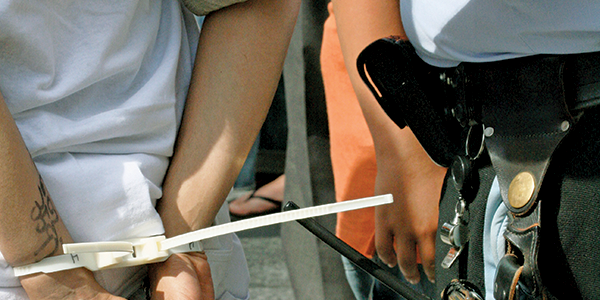 When confronting a wildly out of control suspect who is high on drugs or is afflicted with mental illness, the “gold standard” progression for Law Enforcement Officers (LEOs) has been to capture, control, restrain, and transport.

It is undeniable that the raging person must first be captured, usually by one or more LEOs, before the other phases can take place. However, for decades, LEOs have basically been trained to “fight” a suspect into submission, rather than to capture him (or her) using less combative apprehension techniques.

Anecdotal evidence, often supported by video footage and witnesses, sometimes reveals one or more officers punching an individual in their efforts to gain submission. Other LEOs use pain compliance techniques or “come along” techniques which often fail to work on out of control individuals. Still, many police academies and agencies train recruits and officers how to defend themselves through “defensive tactics.” While these skills are necessary, some recruits and/or officers become injured during this training and, all too often, as a result of these injuries, administrators demand that this training be “watered-down” to avoid workers’ compensation claims and having officers taking sick leave.

Additionally, many recruits leave the academy with a false sense of security about how effectively the techniques will work, or how skilled they are in their use. Others dislike the training or develop disinterest in defensive tactics because they do not believe the techniques will work in the “real world.” This dislike is not limited to recruits. Experienced officers who have used one (or more) of these techniques, only to be battered by the suspect when the defensive tactics failed to work, will most likely avoid using them, too.

Defensive tactics is, as the name suggests – defensive. Defensive training emphasizes learning how to defend oneself, focusing on self rather than a team approach. The tactics also tend to focus on the suspect’s upper body, arms and hands. “Team defensive tactics” is seldom taught using scenario-based situations with a focus of first capturing the aggressor. Using two or more officers in this manner is often ineffective and supports having a “defensive” mind-set, rather than one to “capture” the person.

Often when confronted by an aggressive individual, officers unconsciously default to their limited boxing skills. Frustrated when their pain compliance techniques and/or devices fail to work as demonstrated, coupled with being scared because it may be the LEO’s first physical fight, they often revert to whatever fighting skills they have used in the past or have seen mixed martial artists use. Officers who are striking or using pain compliance techniques on a suspect may have as their primary goal the neutralizing of that individual. However, having a capture mind-set, using proven capture techniques and working as a team, is a procedure which is often missing from the apprehension equation.

Defensive and/or boxing approaches can be a recipe for personal and community disaster after the alleged “beating” is captured on digital video and uploaded to social media. Another reason many defensive, empty-handed techniques are less than effective is because officers do not practice them with regular frequency. Psychomotor skills are perishable and they need to be practiced correctly and often. Although officers practice these sometimes complicated techniques with daily or weekly regularity while in the academy, most will not have this luxury, time or desire after graduation.

Changing the Mind-set: “Capture” not “Combat”

Today, many citizens demand governmental transparency, accountability and the criminal prosecution of LEOs who allegedly use excessive force. They also insist upon a different officer mind-set, coupled with different training. “Capture” training requires a different set of physical skills and mind-set. For example, “capture” tactics are not exclusively defensive, therefore requiring officers to be trained in more than pain compliance techniques. When force is used by LEOs, officers are generally trying to seize (capture) the violator. Too often in these “capturing” situations, LEOs rely on trading punches, pain compliance techniques and/or devices which are inefficient and/or ineffective in apprehending “driven individuals.”

A “driven individual” is more than a person who turns from a “yes” (cooperative) to a “no” (uncooperative) person. The “driven person” often has an altered mental and/or physical capacity to not feel pain and/or to be very goal directed (i.e., attack you or escape at all costs). Statistically, the overwhelming majority (over 90%) of these driven individuals are impaired through drugs, alcohol, mental illness, or their combination, often making them impervious to pain.

Opioid-induced and/or other types of psychoses often make suspects resistive to pain and can give them extraordinary strength. Many trainers teach officers that, if the suspect is within 10-20 feet, use an Electronic Control Weapon (ECW). If the suspect is very close, use a neck restraint. While these force options are proven to work, not all law enforcement agencies have approved the use of ECWs or neck restraints, so what is an officer to do when faced with a psychotic individual who is wildly out of control? First, recognize it as a medical emergency; stage EMS; and, after capturing and controlling the individual, EMS must consider chemically restraining the person who can then be more easily controlled.

Regardless of the underlying cause of a person’s excited delirium or Agitated Chaotic Event, the rapid capture, control and restraint of the individual is important to his (or her) well-being and that of the officer(s). This person is in a “medical emergency” and needs to be captured for rapid medical intervention. However, if officers are routinely taught only pain compliance force options, in today’s opioid abuse subculture, these may not often work, thereby creating a heightened risk of injury to both officer and suspect. Statistically, those agencies which have adopted and retrained their officers in a “capture” paradigm showed less injuries to officers and to suspects.

Reviewing many nonfirearm or edged weapon incidents showed multiple officers were often involved, and the techniques and tactics used in tense and uncertain circumstances often worked against their colleagues’ efforts to get the person captured and controlled. Further analysis suggested that LEOs worked independently and did not attempt to capture the person by working together as a “capture team” which had a plan. Creating this proposed change is not that difficult. A primary goal of capture training is to get LEOs to work together in teams of two or three, with a mind-set on capturing the individual by controlling the person’s legs and hips.

Analyzing video footage showing the capture of suspects by officers who have been trained in new “capture techniques” prove that they work and can be very effective. For example, using a very simple crossed-leg technique and mount position, two officers can quickly immobilize a driven individual, taking control of the situation with minimal force (see Police and Security News, January/February 2017, “Adding P.E.P To Your Use of Force Training”). The simplicity of the crossed-leg technique requires very little practice to become efficient.

Also, the ability to quickly and safely capture a person before applying restraints will often end the conflict more efficiently and with fewer or no injuries.  When handcuffs are used with the crossed-leg technique, the lower limbs are exposed, allowing for faster restraint (if the wrists are unavailable). Controlling the force used by officers allows them to slow down the event (known as pacing and often an important point for litigation or an internal affairs defense). Teaching a mind-set change from “combat” to “capture” is only one part of the training. Force options training must be reformatted, too.

Force options are not “constitutional use-of-force standards.” Rather, they include, but are not limited to, officer presence, verbal commands, empty hand control, chemical agents, ECWs, impact tools, and firearms. In addition to being trained about capture techniques, LEOs need to be retrained on how they select and assess their force tools. This will include a thorough understanding on what the techniques and devices are intended for, and generally how effectively they work in the field.

The use of these statistics and knowledge of force option effectiveness, allow trainers in his agency to identify and teach what tools or devices are proven to work for various situations.  When faced with a situation where pain compliance techniques are known to be ineffective, officers can immediately eliminate them and focus on incapacitation and capture tools.

Pain compliance tools which use motion (e.g., batons) have a greater likelihood of producing injuries. Repeated strikes to an individual because the tool has not worked as intended often creates a perception by those watching of unjust punishment; in short, excessive force. Incapacitation tools and techniques, such as ECWs and neck restraints, when used correctly, cause involuntary body function (i.e., neuromuscular incapacitation, unconsciousness). Research data from coauthor Domingo’s agency are consistent with other studies involving TASER and carotid restraint. Injuries were minimal. Domingo’s data show TASER injuries were mostly caused by probe punctures through skin. In over 100 uses of the carotid restraint, the most serious injuries were minor abrasions caused by contact with the ground prior to its application.

Psychological research data show that, when humans are faced with a violent situation, they will experience a stress response known as “fight or flight syndrome.”  During this response, the human brain loses some of its ability to process logical thought and becomes more reactive. When this happens to officers, they are less efficient in transition, say, from one force option to another one. Since most of the tools taught and/or given to officers are based upon pain compliance, officers are more likely to continue repeating an ineffective pain response technique, rather than transitioning to a technique that works. This delay or failure will prolong the incident, increase the risk of injuries, and give the perception that officers are poorly trained or operating in a punitive manner. Capture training lets officers return to a thinking brain and effectively seize the individual quickly.

In the United States, many people’s positive attitudes about law enforcement have changed to the contrary. They are demanding transparency and accountability, even if it means the prosecution, jailing and/or the suing of LEOs. In contrast, LEO “capture” training has rarely changed with the exceptions of the ECW and/or pepper spray during the last 50 years. Just like peoples’ attitudes and perceptions about LEOs have changed, how we train officers to use force when capturing out of control individuals also must change. In addition, the changes must increasingly focus on de-escalation and fast capture techniques on those subjects who most often will not cooperate due to impairment.

Law enforcement trainers and officers must adopt contemporary attitudes about capturing individuals, while limiting their use of pain compliance force options they know (or should have known) do not work when seizing a violent person. Traditional “fighting” methods which focus on trading punches, too, must be replaced with data proven and easy to learn “capture” techniques. But, first, the current mind-set of “fighting a person” must be replaced with “capturing the person.”

John Domingo is a Lieutenant with the Huntington Beach, CA, Police Department. He is the Use-of-Force Coordinator and developer of the P.E.P. Program, with over 20 years as an arrest and control/use-of-force instructor. He has also served as a SWAT and Negotiations Commander with training in trauma support. He has trained hundreds of peace officers throughout Southern California, and is a highly sought-after presenter and trainer by other agencies. Lt. Domingo has been a frequent presenter at the Institute for the Prevention of In-custody Deaths, Inc. (IPICD) conference.

John G. Peters, Jr., Ph.D., CLS, CTC, serves as President and Chief Learning Officer of the IPICD. The author of several publications and texts, including Tactical Handcuffing for Chain- and Hinged-Style Handcuffs, he is a frequent contributor to Police and Security News.