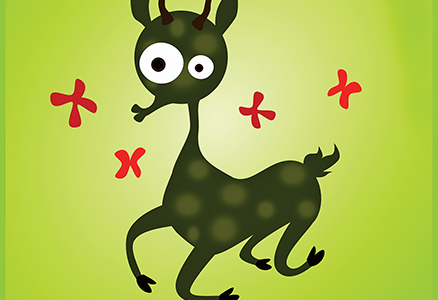 Odds are this guy was just trying to pass the buck… In Massachusetts, a man who contested a speeding ticket in court gave the judge a unique explanation – the officer’s radar gun may have picked up a deer. The Haverhill man was clocked going 40 mph in a 30 mph zone in West Newbury and was given a $105 ticket. He appealed in court, asking the officer if he was 100% sure his radar gun had captured his speed or the speed of a deer which could have been in the vicinity. When confronted by the skeptical judge, the defendant replied that anything was possible. The fine was upheld. Incidentally, deer can run approximately 30 mph. (Judge: Stop bucking the system and cough up the doe! Defendant: Your Honor, how will I get out of this rut?)

I don’t want to know what he did in the flute section… In Fort Worth, Texas, police uploaded security camera footage of a music store thief who walked out of the shop with an entire guitar stuffed down his pants. Officers uploaded a video to YouTube showing the man walking into the Guitar Center store and going to a corner where he shoved a $1,700 Tobacco Sunburst Fender guitar down his pants and then he hid the instrument with his puffy vest. Police said they were shocked by the footage and are asking members of the public to come forward if they recognize the man from the footage. (“You must be mistaken. I already had this guitar in my pants when I came in.”)

Isn’t the drive-through private property and, therefore, not subject to couch laws?… Canadian Police said two men were arrested after taking an intoxicated ride through a McDonald’s® drive-through in New Brunswick while riding on a couch towed by an ATV. The Miramichi Police Department said an officer traveling on KG Highway spotted the entourage with two men riding atop the piece of furniture. The ATV driver fled on the vehicle, leaving the couch and its occupants behind. The intoxicated couch riders, ages 28 and 39, were arrested. A security camera filmed the ATV towing the couch and the passengers on a Miramichi street moments before the police officer spotted the scene at the drive-through. (A couple of genuine couch potatoes)

Fraud is the first thing which comes to my mind… A pregnant woman convinced a reporter from a TV station in Jacksonville, Florida, that the “positive” urine tests she was advertising on Craigslist were accurate and that she was putting herself through school by supplying them (making about $200 a day). The seller claimed that “many” pregnant women market their urine for tests – even though the main use of the test seems to be “negotiation” with boyfriends or husbands. (It sounds like it’s kind of an extortion starter kit.)

“Sort of an E-ZPass for crooks”… A 27-year-old man was arrested in Apopka, Florida, with a modified license plate cover which let him avoid highway tolls. His scheme included a remote control on his keychain which he used to raise and lower his license plate cloaking device. The device let him avoid identification by cameras as he passed through turnpike checkpoints without paying the tolls. But, he got greedy – and lazy – when he neglected to check his rearview mirror before lowering the cover and failed to notice that right behind him was a Florida Highway Patrol car. (Wouldn’t it be easier to just drive a pickup with the tailgate down?)

Great deterrent – now add some OC to the mix… In Tacoma, Washington, a man grew tired of thieves snatching packages from his porch and decided to take action. He took a box from a previous order; rigged it with a plate, a string and a firing pin; and, now, if you try to take it off the porch, you will be taught the error of your ways by a 12-gauge shotgun blast. It’s only a blank shell, but it’s enough to send thieves fleeing. He says one thief even left his cell phone on the porch. (It’s just a suggestion, but maybe he could include some garbage and a few other waste products to the box, as well.)

I don’t think Santa will have any trouble figuring out who’s been naughty or nice!… In Arkansas, a mother thought her Amazon account had been hacked until her six-year-old admitted to using the sleeping woman’s thumbprint to buy $250 worth of Pokémon™. The girl used her mother’s thumbprint to unlock her iPhone® while she was taking a nap and opened the device’s Amazon app. She thought she had been hacked when she received confirmation E-mails for $250 worth of Pokémon merchandise – her daughter’s favorite – but the six-year-old soon confessed to the shopping spree. “No, Mommy, I was shopping.”  Mom says her daughter assured her, “But, don’t worry – everything I ordered is coming straight to the house.” (This young mother’s ordeal is only just beginning.)

This is one “red light district” motorists need to avoid… California’s 2015 law aimed at improving the fairness of its red light cameras apparently isn’t being observed in Fremont (pop. 214,000, just north of San Jose). Last year, the city reportedly earned an additional $190,000 more each month by shortening the “yellow” phase by two-thirds of a second at just two intersections. Tickets went up 445% at one and 883% at the other. (Do you get the feeling that someone is missing the point here?)