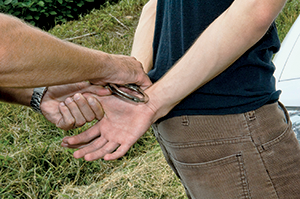 Evidence discovered was admissible because the unlawful stop was sufficiently attenuated by the pre-existing arrest warrant.

Does the Fourth Amendment’s “attenuation doctrine” apply when an officer makes an unconstitutional investigatory stop; learns during that stop that the suspect is subject to a valid arrest warrant; and proceeds to arrest the suspect and seize incriminating evidence during a search incident to that arrest?

Recently, in Utah v. Strieff (U.S. 2016), the Court said yes! The evidence the officer seized as part of the search incident to arrest was admissible because the officer’s discovery of the arrest warrant “attenuated the connection” between the unlawful stop and the evidence seized.

The Case: In December 2006, an anonymous caller contacted the South Salt Lake City Police Department’s drug tip line to report “narcotics activity” at a particular residence. “Narcotics Detective Douglas Fackrell investigated the tip. Over the course of about a week, Officer Fackrell conducted intermittent surveillance of the home. He observed visitors who left a few minutes after arriving at the house. These visits were sufficiently frequent to raise his suspicion that the occupants were dealing drugs.”

During one surveillance, Officer Fackrell observed defendant Edward Strieff “exit the house and walk toward a nearby convenience store. In the store’s parking lot, Officer Fackrell detained Strieff, identified himself, and asked Strieff what he was doing at the residence.” Id.

During the stop, the officer obtained Strieff’s identification and learned that he had an outstanding arrest warrant for a traffic violation. “Officer Fackrell then arrested Strieff pursuant to that warrant. When Officer Fackrell searched Strieff incident to the arrest, he discovered a baggie of methamphetamine and drug paraphernalia.”

“The State charged Strieff with unlawful possession of methamphetamine and drug paraphernalia. Strieff moved to suppress the evidence, arguing that the evidence was inadmissible because it was derived from an unlawful investigatory stop. At the suppression hearing, the prosecutor conceded that Officer Fackrell lacked reasonable suspicion for the stop, but argued that the evidence should not be suppressed because the existence of a valid arrest warrant attenuated the connection between the unlawful stop and the discovery of the contraband.” The United States Supreme Court agreed with the State.

The Ruling: Over the years, the Court has determined that, even when there is a Fourth Amendment violation, the exclusionary rule “does not apply when the costs of exclusion outweigh its deterrent benefits. In some cases, for example, the link between the unconstitutional conduct and the discovery of the evidence is too attenuated to justify suppression. The question in this case is whether this attenuation doctrine applies when an officer makes an unconstitutional investigatory stop; learns during that stop that the suspect is subject to a valid arrest warrant; and proceeds to arrest the suspect and seize incriminating evidence during a search incident to that arrest.”

The Court has also recognized several exceptions to the Fourth Amendment’s exclusionary rule. “Three of these exceptions involve the causal relationship between the unconstitutional act and the discovery of evidence. First, the independent source doctrine allows trial courts to admit evidence obtained in an unlawful search if officers independently acquired it from a separate, independent source. * * * Second, the inevitable discovery doctrine allows for the admission of evidence that would have been discovered even without the unconstitutional source. * * * Third, and at issue here, is the attenuation doctrine: Evidence is admissible when the connection between unconstitutional police conduct and the evidence is remote or has been interrupted by some intervening circumstance, so that ‘the interest protected by the constitutional guarantee that has been violated would not be served by suppression of the evidence obtained.’ ”

Regarding the attenuation doctrine, the question here was “whether the discovery of a valid arrest warrant was a sufficient intervening event to break the causal chain between the unlawful stop and the discovery of drug-related evidence on Strieff’s person. The three factors articulated in Brown v. Illinois, 422 U.S. 590, 95 S.Ct. 2254 (1975), guide [the] analysis. First, we look to the ‘temporal proximity’ between the unconstitutional conduct and the discovery of evidence to determine how closely the discovery of evidence followed the unconstitutional search. Second, we consider ‘the presence of intervening circumstances.’ Third, and ‘particularly’ significant, we examine ‘the purpose and flagrancy of the official misconduct.’ ” For purposes of this analysis, the Court assumed without deciding (because the State conceded the point) that Officer Fackrell lacked reasonable suspicion to initially stop Strieff.

“The first factor, temporal proximity between the initially unlawful stop and the search, favors suppressing the evidence.” Here, Officer Fackrell discovered drug contraband on Strieff’s person only minutes after the illegal stop. As the Court explained in Brown, “such a short time interval counsels in favor of suppression.”  “In contrast, the second factor, the presence of intervening circumstances, strongly favors the State. As prior cases have held, “the existence of a valid warrant favors finding that the connection between unlawful conduct and the discovery of evidence is ‘sufficiently attenuated to dissipate the taint.’ That principle applies here.”

“Finally, the third factor, ‘the purpose and flagrancy of the official misconduct,’ also strongly favors the State. The exclusionary rule exists to deter police misconduct. The third factor of the attenuation doctrine reflects that rationale by favoring exclusion only when the police misconduct is most in need of deterrence – that is, when it is purposeful or flagrant.”

According to the Court, “Officer Fackrell was at most negligent. In stopping Strieff, Officer Fackrell made two good faith mistakes. First, he had not observed what time Strieff entered the suspected drug house, so he did not know how long Strieff had been there. Officer Fackrell thus lacked a sufficient basis to conclude that Strieff was a short-term visitor who may have been consummating a drug transaction. Second, because he lacked confirmation that Strieff was a short-term visitor, Officer Fackrell should have asked Strieff whether he would speak with him, instead of demanding that Strieff do so. Officer Fackrell’s stated purpose was to ‘find out what was going on [in] the house.’ Nothing prevented him from approaching Strieff simply to ask.” Nonetheless, those errors in judgment “hardly rise to a purposeful or flagrant violation of Strieff’s Fourth Amendment rights. * * * While Officer Fackrell’s decision to initiate the stop was mistaken, his conduct thereafter was lawful.”

“Moreover, there is no indication that this unlawful stop was part of any systemic or recurrent police misconduct. To the contrary, all the evidence suggests that the stop was an isolated instance of negligence that occurred in connection with a bona fide investigation of a suspected drug house. Officer Fackrell saw Strieff leave a suspected drug house. And his suspicion about the house was based on an anonymous tip and his personal observations.”

Accordingly, the Court held that “the evidence discovered on Strieff’s person was admissible because the unlawful stop was sufficiently attenuated by the pre-existing arrest warrant. Although the illegal stop was close in time to Strieff’s arrest, that consideration is outweighed by two factors supporting the State. The outstanding arrest warrant for Strieff’s arrest is a critical intervening circumstance that is wholly independent of the illegal stop. The discovery of that warrant broke the causal chain between the unconstitutional stop and the discovery of evidence by compelling Officer Fackrell to arrest Strieff. And, it is especially significant that there is no evidence that Officer Fackrell’s illegal stop reflected flagrantly unlawful police misconduct.”

Larry E. Holtz has served as a Detective Sergeant with the Atlantic City, New Jersey, Police Department; a Deputy Attorney General for the state of New Jersey; and an Assistant County Prosecutor. Mr. Holtz is a certified police trainer and teaches on a regular basis. He is a member of the bar in New Jersey, Pennsylvania, and the District of Columbia and is admitted to practice before the federal bar in the District of New Jersey and the Third Circuit.