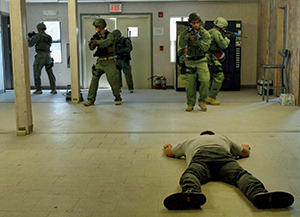 The last issue of P&SN called attention to the limitations of traditional “on the line” firearms training in preparing an officer for a lethal encounter. On the line training is irreplaceable for teaching basic gun handling, but it will not prepare you for the physical and emotional stresses of coming under fire.

Over the decades, there have been numerous attempts to perfect realistic good guys versus bad guys training. There is not even a commonly accepted name for this type of training and no nationally accepted training guidelines have emerged. Name suggestions which would correctly define this training would be Force on Force Training, Reality-Based Tactical Training (RBTT) and Lethal Encounter Firearms Training (LEFT). For ease of reference, LEFT will be used in this article.

This type of training has ranged from wax bullets and plastic bullets to paintball, laser MILES (Multiple Integrated Laser Engagement System) gear and AirMunition®. Later on in the ’90s, Simunition® created what could have been a revolution in firearms training; regrettably, it has been a slow-moving revolution.

Simunition (Sim) allowed conversion of real weapons to fire less-lethal paint markers. This created a realistic, yet safe, way to experience hostile fire. Unfortunately, the technology to function a real firearm with a low powered paint marker is expensive and, therefore, so is the training.

Within the last decade, a competitor round, Force on Force (FOF), made at the Federal Cartridge factory, has improved the situation. With a factory advertised one foot safe standoff; no gunpowder fumes; minimal bore fouling; and a five year shelf life, it represents product improvements which have solved many of the technical issues with Sim. Equally important, being fully interchangeable in weapons converted to fire Sim, it has introduced price competition, bringing down the cost of LEFT. However, FOF also uses expensive technology to reliably function weapons designed for much more powerful lethal ammunition.

FOF/Sim cost 50 to 55 cents a round for handgun ammo and between 57 to 65 cents for 5.56 ammo. This cost limits the amount of this training that even larger agencies can do and places it beyond the budget of many small- to mid-sized ones. A third product, UTM, which uses a unique conversion system and is not interchangeable with FOF/Sim, is just as expensive.

The cost of LEFT has led a lot of agencies to try airsoft as an alternative with very mixed results. There are a lot of airsoft models which look and feel close to the real thing and some that are right on the money. The problem is finding the realistic replicas in a vast sea of products.

Airsoft is almost exclusively made in a part of the world where civilian ownership of firearms is either mostly, or completely, forbidden. Consequently, what most users of airsoft know about real guns is what they see in the movies. They demand – and the manufacturers try to deliver – the “Hollywood” shooting experience. Many airsoft guns have magazines holding hundreds of rounds and deliver them at rates of fire which are several times the rate of the real weapon being simulated. A prized feature of many of these guns is the ability to upgrade them to fire even faster.

Another reality of airsoft is that, like in many other hobbies, the majority of enthusiasts run out of enthusiasm pretty quickly, so many airsoft guns are used for a while, but spend a lot of time buried in the closet. A lot of airsoft guns seem realistic, but are also not durable.

There are some highly realistic, very well made airsoft guns; the problem is identifying the ones which are right for LE training.

Another limitation to airsoft is that it does not mark. Marker rounds have been developed, but they are either too fragile and are prone to breaking in the gun, or so well encapsulated that they require a hard surface to mark reliably. In the adrenaline rush of simulated combat, a hit from a very low impact projectile which does not mark is easy to ignore.

To significantly reduce cost and make LEFT more broadly practical for small- to mid-sized agencies requires “out-of-the-box” thinking on the part of both the manufacturers and the users. In the past couple of years, such a concept has emerged from Umarex, the parent company of Walther® firearms. A leader in airgun and airsoft products, they have created the Training for Engagement (T4E) line. T4E combines CO2 powered airguns with relatively small diameter .43 caliber paintballs and chalk balls. This allows production of marker guns which are dimensionally the same size, look, feel, and weight, and operate very much like their real counterparts. They feed from a detachable, limited capacity box magazine, are recoil operated and lock open and cease to function on an empty magazine. Safety and magazine releases are the same as for the firearms they simulate.

T4E has some limitations compared to FOF/Sim. The line is limited so far to a clone of a SIG 226 handgun and M4 and HK416 carbines, along with a Walther PPQ, which will fit a GLOCK® holster (to be introduced at the beginning of 2017) – and they are airguns, NOT firearms. Care and maintenance are very different than for the devices to give satisfactory performance.

T4E also offers some advantages. The low impact nature of these less-lethal marker rounds makes possible not only engagement of live opponents, but also use of areas which would not be safe for the use of other types of nonlethal ammunition.

The incidence of school and theater shootings in recent years has left many communities concerned about their potential vulnerability to such an event. Through LEFT, local tactical teams can lay out detailed scenarios, sometimes borrowing the actual buildings, to hone their response if an active shooter situation should develop. Use of low impact marker rounds, especially airgun-based ones, followed by a prompt cleanup, will leave borrowed buildings ready for their normal use. The presence of a trainer, armed with a nonlethal firearm, allows the role-playing active shooter (or shooters) the capability of putting tactical team members under fire which will prevent the training scenario from becoming rote and will give the team the experience of simulating combat, something no other training can provide.

Besides dealing with specific definable potential threats, LEFT allows every trainee to experience the stress and disorientation of coming up against an armed opponent. Because trainees are not restricted to a firing range, but can utilize changing locations and will always face a live, thinking opponent, they will be forced to learn how to best function under the emotions of combat. Such training experiences should put a premium on keeping the situation as unpredictable and stressful as appropriate.

Having lower impact, purpose-built airguns require less protective clothing and will not damage borrowed facilities like empty schools or theaters. Plus, the ongoing cost is significantly less, reducing the cost of LEFT to a quarter or less of weapon-based marker systems.

George Petronis is President and Managing Partner of Policeammo from The Gun Shop. This is The Gun Shop’s 40th year supporting law enforcement firearms training. They are the nation’s largest law enforcement distributor of Force on Force and Umarex T4E. Anyone interested in a dialogue about advancing the use of LEFT for LEO training is invited to contact George at gpetronis@policeammo.com or (609)859-1997.

Advantage: The ability to convert almost every major firearm used by law enforcement to fire these markers ensures maximum realism in training.

Disadvantage: The high cost to manufacture these rounds imposes budgetary limitations on how much of this training can be afforded.

Advantages: Very low cost allows for a maximum amount of training. These are NOT converted firearms; there is absolutely no chance of firing a lethal round. Legal restrictions on discharging firearms do not apply, so training can be conducted almost anywhere.

Disadvantages: The marker guns are very realistic, but, thus far, there are only a few models. Although trainees are using a weapon which functions just like a real gun, it may not EXACTLY duplicate their duty gun. Maintenance techniques are different and must be correctly learned and applied.