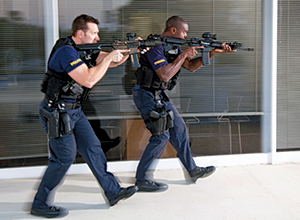 The urban environment presents a unique set of circumstances which require officers to adapt their tactics to overcome the many obstacles contained within.

As we’ve seen in Dallas, Baton Rouge, Orlando, San Bernardino, and a number of other areas across the country, the willingness of assailants to use rifles against law enforcement seems to be on the rise. As in the case in Baton Rouge, some of these individuals have a military background, including military combat training. Because of this, our rifle skills are more important now than ever before – especially our patrol rifle skills.

Those practiced long-range shots out to 300 yards are impressive, but as we witnessed in the above mentioned cities like Dallas and Baton Rouge, the realities of a gunfight are much closer. Most gunfights are up close and personal, including those against assailants armed with a long gun. If vehicles are involved, you’re looking at a couple of car lengths at best. In and around buildings, we’re discussing feet, not yards.

Distance is still our ally, but sometimes that ally is difficult to find, especially if you’re going on the offensive. Someone once said, “The best defense is a good offense,” and if you’re going up against someone on a rampage, hell-bent on killing as many people, or officers, as he can, you will need to go on the offensive. The days of setting up a perimeter and waiting for the tactical team are long gone. We learned that lesson a long time ago (or at least it seems that way) with Columbine.

Going on the offensive and taking the fight to the active shooter sucks, but there’s no getting around it. It’s what we signed up for – to serve and protect. That doesn’t mean risking your life unnecessarily, but it does mean heading into the fray when others would run in the opposite direction. It’s what we do – it’s just that simple.

Taking the fight to the shooter involves shooting and moving. You will need to possess the ability to shoot accurately while moving towards the target or towards cover. As we saw in two of these recent incidents, it was the shooter who went on the offensive against police officers. We need to counter that offensive with one of our own to neutralize the suspect, or at least pin him down and stop his movement. By preventing him from moving, you’ll (hopefully) stop him from killing other officers or civilians, and keeping him pinned down (even if it’s only for a short time) will allow you to bring other resources to bear down on him. This could be more personnel, an armored vehicle or a remotely controlled robot with a bomb.

Along with the ability to shoot while moving, you also need to possess the ability to shoot your rifle accurately without the use of your sights. I know some of you diehard target shooters may be rolling your eyes right now, but learning to point shoot with your rifle is actually easier to learn than point shooting with a handgun. I believe it has to do with having a steadier platform to shoot with. You can “lock in” your rifle using your skeletal frame more than you can with a handgun, so your rifle remains steadier and stays on target easier.

For those of you with doubts about point shooting with a rifle, consider this for a minute. Imagine that you’re making entry into a darkened building, looking for an active shooter who might pop out of a doorway or around a corner at any second. Are you walking down that hallway looking at your gun, or are you looking for movement at every doorway and around every corner? Think about the amount of time you’ll take bringing the gun up to eye level, aligning your sights and then firing. With point shooting, all you have to do is fire. We’re only talking fractions of a second, but, many times, gunfights are won in fractions of a second.

Please note that this isn’t utilizing “spray and pray”; it takes practice to learn point shooting, but it’s not overly difficult. There are some basics you need to learn, but point shooting with a rifle out to ten yards can be learned in just a short time. I teach a CQB patrol rifle instructor course in which I get everyone in class out to 20 yards on day two, firing accurately with taped over sights. Do some officer-involved shootings occur out past 20 yards? Certainly, so that’s when you should use your sights – that’s why they are there. A lot of guys become hung up on point shooting, thinking it’s “either/or.” In reality, it’s both. You should know how to point shoot because a lot of officer-involved shootings happen at closer distances and you should know how to use your weapon’s sighting system at greater distances for when the circumstances call for a longer, or more accurate, shot.

When you’re in close to the bad guy, accuracy is not as important as speed and hits. If the bad guy is right on top of you, you will need to be fast and deadly. Taking your time and putting a big hole in the center of the target with all of your rounds looks nice on the range, but the realities of the street are much different. There’s a good chance the bad guy is already shooting at you, and this bad guy and you will both be moving. Trying to knock out the center ring under those conditions will be difficult at best, but you can still achieve good solid hits where they count by utilizing point shooting.

Please note that I’m not here to point fingers or judge anyone’s decisions, and I’m certainly not trying to be overcritical. God knows that I’ve made some mistakes in my law enforcement career and, if things had gone further south, I would have been in serious trouble. I was just lucky at the time that the bad guy decided not to capitalize on my mistake.

I’ve watched hundreds of videos of officer-involved shootings and I’ve spoken to well over 300 police officers who have been involved in a deadly force incident, with some having been involved in multiple shootings. I analyze these past incidents to learn and to pass on this knowledge. With that being said, we saw (on video) in one of the recent attacks on law enforcement where the officer “crowded cover.” He ran up to a large column on a building and took cover behind it, looking around the right side of the column. The killer – armed with a rifle – came up along the officer’s left side and shot him at point blank range. The officer never saw him coming because the officer was too close to the column, i.e., crowding cover.

Remember to back away from the cover you are utilizing and use the angle of incidence to “cut the pie” around the corner, or cover, where you are positioned. Try to identify cover early, before the shooting starts. In the middle of a gunfight is no time to start looking around trying to figure out what is, or what isn’t, cover.

During the stress of an officer-involved shooting, it’s hard to recall all of your previous training. That’s why it needs to kick in automatically for you. You need to take your training seriously and you need to practice it often, even if that means training on your own time and at your own expense. Create your own personal training budget where you set aside a few dollars each month for ammo or to take a class you’ve always wanted to attend (but your department wouldn’t spend the money to send you).

To counter this willingness of bad guys to use long guns against us, we need to have equal (or better) rifles, training and tactics. We saw this in the 1980s when departments transitioned from revolvers to semiautomatic handguns to combat gang violence associated with a number of factors, such as the crack cocaine epidemic. With the current administration in Washington calling for the “demilitarization of law enforcement,” and the cutbacks on grant money for equipment and training, it makes our profession more difficult, but we have to persist. The alternative is unacceptable – we don’t ever want to be outgunned or outtrained.

Other Sources of Funding

If your agency can’t afford to equip all of their officers with patrol rifles, look for outside funding, as we’ve done in the past for K-9 units. Other examples of alternate funding include civic organizations which have purchased patrol rifles for their local agencies. Some departments have organized fundraisers. At times, the PBA or local unions have donated money for rifles and/or training. Other agencies have allowed officers to purchase their own rifles as long as these weapons meet, or exceed, agency standards.

Every police vehicle which pulls out of the parking lot should have access to a patrol rifle. These include the traffic division, investigations, supervisors, and anyone else working the streets.

With the recent attacks on law enforcement (and the current threat of terrorism), we’ve now seen that times have changed for the worse. We need to adopt the Marine Corps model of every marine is a rifleman. Our attitude needs to be that every officer – regardless of his (or her) position, rank or title – is a rifleman. Countering the ambush-style attacks which have plagued us recently is difficult. Trying to predict when and where these are going to happen next is even more difficult. With that in mind, we need to have patrol rifles available to us immediately and at all times.

If you’re going to be involved in a gunfight, you’ll need superior firepower and that means a patrol rifle or a shotgun. A shotgun can be just as deadly in close quarters in the hands of a skilled operator. All it takes is a little practice, just like your patrol rifle. Be safe, watch your six and roll backup on every call because, sadly, times have definitely changed.

Mike Rayburn has been involved in law enforcement for over 38 years. He is a retired police officer, former adjunct instructor at the Smith & Wesson Academy and is the author of five books. Mike can be reached at www.combatgunfighting.com.