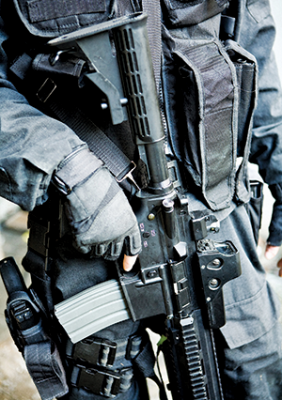 When forced to switch from primary to secondary, speed is imperative.

When considering making the switch from your primary weapon system (your rifle) to your secondary weapon system (your handgun), you need to perform a “needs assessment” which is based on the circumstance you’re in at the time. If someone is shooting at you from 100 yards away, then automatically transitioning over to your handgun doesn’t make a whole lot of sense, unless, of course, you’re one heck of a shot with your sidearm. At this distance, keeping your rifle in the fight makes more sense.

However, if you’re inside a residential dwelling and your rifle malfunctions while in a gunfight in one of the bedrooms, it makes more sense to transition over to your handgun as quickly as you can. We all know that distance equals time and, at this distance, you have no time, so you need to get your handgun out there as quickly as you can to get some lead on target.

There are three different methods of doing this. I’ll explain all three of them so that you know the difference, just in case someone tries to tell you differently. I’ll also explain all three of them to you so you can determine which one is the fastest to perform, rather than what some instructor tells you is his (or her) “favorite.” Tactics should be based on methods which are the fastest and easiest to perform under stress – not on what someone likes or dislikes.

The first method is simple. Keep the butt stock of the rifle locked into your shoulder with the barrel still up and pointed at the target, and draw and fire your handgun. Bring your handgun right up alongside the rifle’s barrel. Don’t worry about accidently hitting your rifle with a round from your sidearm; it’s not going to happen. You’d have to deliberately point your handgun at the rifle to even come close.

The third method is to allow the butt stock to drop down while you “curl” or bring the fore stock of the rifle into your chest, keeping the barrel of the rifle pointed up and away from you or anyone else. You do this at the same time as drawing your handgun from your holster. You’re in a gunfight, so the last thing you want to do is to perform one thing at a time – so bring the rifle into your chest at the same time you’re drawing your handgun.

Proceed to the Range

Head out to the range and try all three methods with this simple drill. Load two live rounds into your rifle’s magazine and three into your handgun’s magazine. Charge both weapons to make them hot at the firing line. Fire two rounds from your rifle, running it dry to simulate either a malfunction or an out of ammo scenario, and then fire three from your handgun.

This isn’t about what you like or dislike.t’s not even about what I like or dislike. It’s about which method is the fastest and easiest to perform under stress. If you try all three methods, you’ll determine for yourself that the first method of keeping the butt stock locked into your shoulder with the barrel up and just bringing your handgun up alongside the rifle is the fastest and easiest to perform.

In the very first method we discussed, all you have to do is draw your handgun. You’re in a fight for your life, a gunfight, and you need to get some lead on target as quickly as possible. Having to try and think about two things at once while someone is shooting at you is going to be next to impossible.

What Could Go Wrong?

At this point, some of you may be questioning as to why we just don’t let the rifle drop, considering we have a sling to hold it. Have you ever heard of Murphy’s Law? What can go wrong will go wrong at the worst possible time. Murphy’s Law always seems to be hanging around when cops get into a gunfight.

Having your rifle hit you in the groin while you’re trying to draw your handgun is not a good thing. I’ve seen it happen on the range, so you can bet it’s going to happen in real life – and usually at the worst possible time. The other thing is that there’s a good chance you’re going to be moving, like entering a room, and you don’t want your rifle bouncing around and possibly getting tangled up in it as you try to draw your handgun.

There’s one last item to consider. Some of you may be concerned that the first method only allows you to shoot with one hand. The general feeling among firearms instructors is that you can shoot more accurately with two hands because you have better support. The thinking is that, if you do it right, “it should take no more time to get a two hand grip than a one hand grip.”

The problem with that thinking is that, if you look at actual officer involved shootings, the majority of them involve the officer shooting with one hand, not two. Why? Because it’s faster and easier to do. Why worry, or THINK, about that off hand – and where to place it – when all you have to do is draw and fire.

Under stress, the subconscious part of your brain is going to override any tactic you’ve been trained to do which is either too slow or too complicated, and go with what is the fastest and easiest to perform. It’s part of that whole fight or flight thing, so why not train that way? Train the way you fight!

To be fair, try all three methods and even throw in dropping your rifle on its sling. You’ll find out for yourself that just keeping the rifle in place while you draw and fire your handgun is the fastest and easiest to perform and you don’t have to worry about whacking yourself in the groin – which is always a good thing.

To learn more practical and realistic rifle tactics, pick up a copy of my book, Tactical Urban Rifle. The book contains information on this topic, as well as many others.

Michael T. Rayburn has been involved in law enforcement since 1977 and is the author of five books. He is a former Adjunct Instructor for the Smith & Wesson Academy and is the owner of Rayburn Law Enforcement Training. He can be reached at www.combatgunfighting.com.