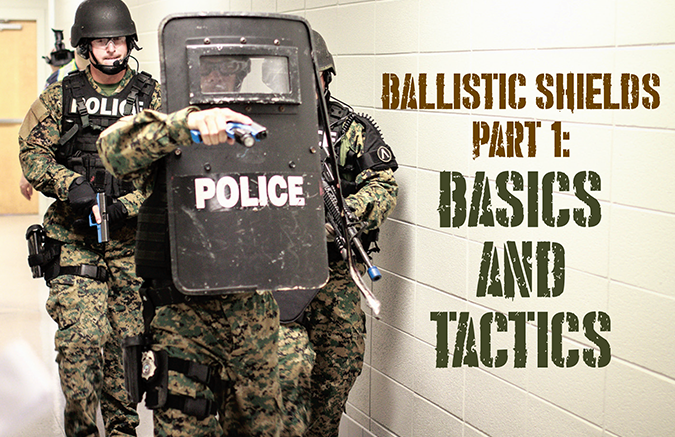 The shield is older than civilization itself and no other implement has shaped warfare to such a tremendous extent.

Shield walls and phalanx tactics are plainly visible in carvings from ancient Sumeria which date back to 2600 BC. Shield wall tactics were also used by ancient Egyptians. In Ancient Greece, all infantry tactics were built around the shield – a hoplite was not considered armed without his aspis which enabled the phalanx formations of the age – and the skirmishers who fought outside formation, peltasts, were named after their light shields, pelta. So, too, was the Roman shield, the scutum, the most essential piece of a legionnaire’s kit; the infantryman could fight without body armor, but never without his shield.

As centuries passed and the age of the lance and crossbow bolt developed into the age of gunpowder, the shield fell into disuse. The wooden or light iron shield was no match for firepower. By the 18th century, it was already effectively obsolete in a military context. But, unlike the lance and the saber, the shield has evolved, and today’s ballistic shields differ enormously in their construction from the shields of ages past. They are also used in a very different manner.

Today’s shields can be described very simply as “man-portable hard armor ballistic barriers.” The most common type, which most closely fits the classical definition of the word “shield,” is handheld or supported by its user’s body. A somewhat less common type is too large and heavy to be used in such a manner, so is supported by a wheeled trolley.

Ballistic shields are similar to hard body armor plates in their construction. In fact, they are usually made along exactly the same lines as body armor plates. This means that they are generally built from a small handful of common ballistic materials:

These materials are often used in combination. A “ceramic armor plate” usually consists of a ceramic layer bonded to a backing layer made of a fiber composite (Fiber-Reinforced Plastic, FRP). The ceramic layer will typically be anywhere from 0.13″ thick to 0.4″ thick and the FRP backing layer in the 0.25″ to 0.6″ thickness range. In this sort of material configuration, to simplify things a bit, the high hardness ceramic layer serves to break up any incoming bullet core and the FRP backer absorbs the fragments and residual kinetic energy. Far less frequently, a ceramic layer can be used over a ductile metallic backer or a hard metallic strike face can be layered over an FRP backer.

In practice, ballistic shield material selection hinges on the answers to two questions: (1) What level of protection is the shield going to offer? and (2) What is the target weight?

Let’s take them one at a time. So, with respect to the first question, the first step is to refer to the NIJ specification for ballistic shields, 0108.01. This specification was released in September 1985 and has not been updated since because, frankly, it hasn’t really needed updating. The table below summarizes the levels which shields can be rated to:

Commercially, shields rated to Level III+ are also commonly encountered. Level III+ has no clear definition. It should refer to armor which complies with the Level III specification and also is capable of defeating common steel core ball rounds like M855/SS109 and 7.62x54mmR LPS. In practice, it means whatever the manufacturer wants it to mean. Because there is no official definition, and the industry definition is so vague and ambiguous, we’ll set it aside.

Shields rated to Level III and below are now usually made entirely from UHMWPE-based fiber composites – they do not make use of ceramic or metallic ballistic materials. Level IV shields must be made either with ceramic armor techniques – for e.g., a ceramic layer bonded to a fiber composite layer – or from extremely heavy plates of steel nearly ½” thick.

Because they share materials and technologies, these weights are within striking distance of the average weights for 10″ x 12″ body armor plates. But, 12″ x 12″ was a hypothetical example – shields typically measure much larger than that; the smallest are rarely under 18″ x 24″, and even that “small” 18″ x 24″ shield has a surface area which is three times larger than our one square foot hypothetical and four times larger than a 10 ” x 12″ SAPI-style armor plate. A small IIIA shield can be substantially heavier than a Level IV body armor plate; a small Level III shield weighs about as much as two Level IV body armor plates combined; and practically all Level IV shields are well over 30 pounds.

What we can do in print is briefly cover the basics and highlight some best practices which should apply no matter what type of shield you’re using. We’ll also focus on Level II, IIIA and III shields which are carried by shield operators – as opposed to Level IV shields which are pushed along as mobile barricades on wheels.

Ballistic shield handles come in various styles – U-handles, ring handles, strap handles, bar handles, etc. – and how the shield is held will vary depending on which handle setup you’re using. As a general rule, the optimal tactical hold is one where the shield is held away from your body, directly in front of your torso, without any cant at all or with a very slight downwards cant. If your shield has a viewport, it’s generally recommended to bring your helmet in contact with the upper rim of the shield which stabilizes it and should keep your eyes at a constant distance from the viewport. In this case, your entire upper body – head and neck included – will be behind the shield. If your shield does not have a viewport, you’ve got two options. Either you can keep your face behind the shield – taking quick peeks for visibility and otherwise trusting your squad mates for guidance – or the shield can be held lower, with the top rim of the shield at roughly nose level, with your eyes above the shield for visibility. The shield in this position will protect your torso, neck and most of your face.

In a static hold position, the appropriate stance is not a boxing stance with (assuming you’re right-handed) your left foot 15 inches forward of your right foot, a slight tilt to the right and your knees bent. You should adopt a tall forward stance, with your left foot about six to nine inches behind your right for balance and your lead foot pointing straight forward. This static hold position is sometimes called a “combat stance.”

Once you’ve found a comfortable static hold, you should be able to move laterally, forward and to the rear quickly – and you should be able to pivot very quickly. Mobility is of paramount importance because the shield operator typically leads the tactical entry squad – all of the others move at his (or her) pace.

If you’re using a handgun alongside a ballistic shield, keep two things in mind: If the slide hits the shield, you’re much more likely to experience a malfunction such as a failure to eject. Also, if your arm is in contact with the shield, your shots will likely experience some horizontal drift. Practice clearing malfunctions and handgun plus shield shooting. It’s also worth noting that certain optics, such as laser sights, can be especially useful for shield operators.

Reloading while carrying a shield can be a challenge. With many shield types, you’ll need to crouch behind the shield to free up your off hand. Even with light shields, reloading is always slower and more difficult than it would otherwise be. As such, it is generally recommended that you carry a second loaded sidearm.

Some shields – typically those without viewports – are designed with cutouts which serve as weapon supports. These are often, but not always, designed for use with carbines rather than handguns. When using a shield of this type, make sure that you can use your weapon with the shield in a proper tactical hold and that you can operate your shield, as well as your weapon, with sufficiently unimpaired mobility. If you can’t make use of a supported long gun unless the shield is shunted to the side or angled downwards, or if supporting a long gun makes it difficult to move, pivot or respond to a dynamic situation, it’s recommended that you skip the supports and simply use the shield alongside a handgun.

Various unique techniques are open to the shield operator. “Lipping” involves pressing the edge of a shield against a structural feature like a wall or door frame. When turning a corner or entering a room and making a turn, the shield can be lipped at the entry point and pivoted around which keeps the operator and his squad mates protected. With practice, this can be done very quickly; with a lot of practice, it becomes reflexive.

“Splitting” is commonly done when the shield operator enters a room and expects a threat to engage his support side. If the operator is right-handed, he would pivot the shield outwards and to the left, typically via external rotation of the shoulder. In this position, the operator’s weapon and attention are facing forward, but the shield is covering and protecting the left side of his body.

In a close combat situation, or when making an arrest, lower your center of gravity by bending your knees, adopt a wider stance and slightly angle your shield outwards so that your assailant cannot easily grab it. If necessary, and if your shield’s handle allows for it, the shield can be used as a striking implement. In this case, it’s best to strike with the side edge of the ballistic shield – this is most effective as a compliance measure as it concentrates force on the smallest possible surface area, makes the shield difficult or impossible to grab, and reduces the likelihood of damage to the shield’s ballistic materials.

Now, unless your shield is made of steel, it should be noted that ballistic shields are not riot shields and are not built to withstand repeated or severe blunt impacts. Even moderate impacts, on the order of 25-70 joules of impact energy, can damage or degrade the ballistic materials used in their construction. UHMWPE composite layers can delaminate – and this has been clearly observed at 50 J – and the ceramic layer, if there is a ceramic layer, can crack. Some situations are unavoidable, but non-steel ballistic shields are, emphatically, neither blunt impact tools nor suitable for use as riot shields.

Jake Ganor is a materials scientist, armor engineer and a designer of ballistic shields. His company, Adept Armor (www.ade.pt), is pioneering next generation armor systems. His book, Body Armor and Light Ballistic Armor Materials and Systems is now available on Amazon.