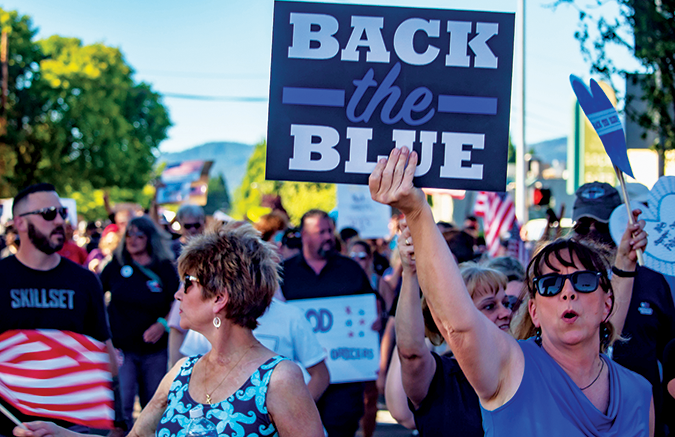 From Defund to Retool

The joke goes: A man is having a bad day. He gets fired from work, goes out to find his car vandalized, then goes home to find that his home was burglarized. It’s a busy day in the district and the nearest available officer is a K-9 unit. The sunglasses-wearing officer gets out and the German Shepherd comes bounding out of the vehicle after him.

The man laments, “Oh, God…I’ve been fired…my car gets vandalized…my house gets broken into…and they send me a blind policeman!”

Okay, not as funny as when I first heard it in 1979 in the police academy. When you’re new to everything, police instructors’ jokes are always funny. You could even tell jokes like that in the company of non-law enforcement people at a party or a picnic and get a few laughs. Today, there’s very little about police work which makes people laugh (and, to be honest, no one in society today would dare laugh at anything referring to a disability). We all know about the unfortunate era which started with the Ferguson, Missouri, riots and the ensuing nationwide anti-police demonstrations. From that point on, we were under the microscope like never before. I explained it to a classroom full of teenagers like this: Imagine you go to a restaurant and you see a rat scurry across the floor. You blab it to the local newspaper and they run a short story about it. You do a little research and find that another restaurant a few cities away had the same thing happen. You go on social media and tweet about the rat and, in no time at all, there are hundreds of responses from people who have experienced a roach on the wall or a fly in their salad. Soon, it’s viral – thousands of tweets are crisscrossing the social media universe about this appalling crisis of the unsanitary conditions in American restaurants. Dining in the United States is going to get you sick or infected. It’s a menace.

Plug in any profession you want in that template – health care, education, you name it. Social media hasn’t been our friend in police work because we never bothered to play in its sandbox and we found ourselves without a social media strategy when the sand was thrown at us. The horrific George Floyd case plunged the reputation of the police to depths we’ve never seen in this country. Then, the frenzied demands of “defund the police!” echoed from coast to coast. More protests, a rash of ambushes on cops and, before long, it seemed like we could never recover. Indeed, it seemed we would succumb to the “defund” and “disarm” demands.

Now, in post-COVID America, where are those angry voices? Where is the “defund” movement? Moreover, where was that “movement” even going in the first place?

To begin with, I can’t think of a more poorly named movement. I’ve lost count of how many times I’ve read and heard defund proponents try to explain, defend and define what the phrase “really” means. Someone very close to me, in fact, was adamant that “people misinterpret” what defund the police means. It sounded clear and direct to me, but okay, I said, I’m all ears.

“It means to reallocate the funds, not take them away completely.”

Reallocate them where, exactly? He said that too much money was being spent on police military equipment. Suddenly, everyone has access to police agency budgets and knows where all the money is going. The “militarization” of police departments has turned police officers into salivating, trigger-happy mercenaries. I also heard that community service expenditures, like a policed-out Batmobile visting schools was also a stupid waste of money. We have to defund! But wait – it means reallocate. Where? Reallocate it anywhere but to armored personnel carriers and SWAT gear (or Batmobiles). It doesn’t matter, just take it away; we’ll figure out where later!

Then, there was more horror in our schools. Students gunned down in classrooms and hallways. A seemingly bumbling, timid police response in Uvalde, Texas, cost young lives. Citizens loudly called for more aggressive police tactics to take down the killer. The sight of heavily armed, even militaristic, cops guarding our schools became a comfort, not a threat. By mid-2022, only 31% of Americans believe that police funding needs to be redirected to community social services (Newsweek, May 2022)and a left-wing president even said, “Fund our police and give them the tools they need.”

Perhaps people are figuring out some simple truths. Maybe they started asking questions in a rational manner:

Do we want more professionalism in our police departments?

Do we want better training or better supervision? Do we want to hire more mature, intelligent officers?

Yes, we want it all. Now, here is the big one: Can we do all that with less funding?

So, what has become of the movement? The better question is: What has it become? In some places, social services and police have come to a meeting of the minds to address the critical problem of mental illness. In Denver, Colorado, the city’s STAR (Support Team Assisted Response) personnel respond to nonviolent cases of trespassing, vagrancy and low-level public nuisances. STAR personnel are unarmed mental health “first responders” whose first task is to determine if police are needed on scene at all. If they can handle the situation without law enforcement, they put their social work training in gear and get the individual the help they need, be it medical or otherwise. STAR has relieved police officers of some 3,000 calls for service since it went into action. STAR currently operates only from 6:00 a.m. to 10:00 p.m., when their highest call volume occurs, to respond to “low-level behavioral health problems.”

The “defund” movement isn’t quite dead. Instead, it might be taking on a new form. What once appeared to be a hopeless, irrevocable conflict has instead evolved into new strategies and efforts to tackle a problem which has long been dumped only on police officers.

And when you stop paying attention to what’s “going viral” and use teamwork to find solutions, new roles can be created to address old problems.

Then, maybe, we can start laughing at jokes again.