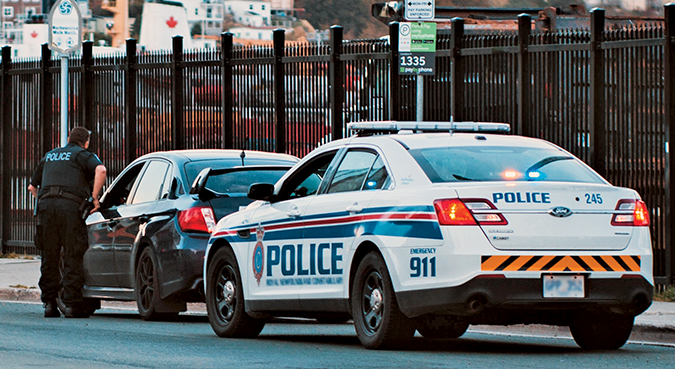 Do you spend your shift in a vehicle? Aboard a motorcycle? A bike? A horse?  Actually, you are still likely to spend a good part of your shift as a “pedestrian.”

So says Tim Burrows of the National Law Enforcement Liaison Program, and he states that’s why you need to plan how to keep safe when you’re away from that metal barrier.

Nationally, the number of all pedestrians (police and nonpolice) struck and killed by drivers has spiked in recent years, according to the Governors Highway Safety Association (GHSA). The organization states that 2020 saw 6,721 pedestrians killed even though there was a drastic drop in miles driven during the pandemic. That sad trend continued in 2021’s first quarter, with a 10.5 percent increase in pedestrians killed.

According to “Route Fifty” (route-fifty.com), the national average is that a first responder dies every other week on US roadsides because of the danger of working along the shoulder or the outside lane of a road. The American Automobile Association (AAA) and many traffic safety groups are fostering “slow down, move over” laws to increase driver awareness of the dangers roadside “pedestrians” and workers face. A study by the AAA Foundation of Traffic Safety has shown that nearly 23 percent of drivers are unaware that their state even has a “slow down, move over” law. Among the drivers who are aware of such a law, about 15 percent state they do not understand the potential consequences for violating that law.

AAA has public awareness campaigns to increase awareness of both driver behavior change and the existing laws, and is also offering precautionary tips to protect roadside public safety workers, drivers with disabled vehicles, and others at risk. The tips cover such factors as remaining alert; avoiding distracted driving; watching out for situations where emergency vehicles and workers, tow trucks, utility service vehicles or disabled vehicles are along or at the side of a road; and the need to slow down and, if possible, move to a lane away from the people and vehicles at such an incident.

Breul explained that there has been a 22 percent increase in police officer fatalities in automobile, motorcycle or “struck by” accidents. A large percentage of such accidents are single vehicle, he said, but might also involve such personnel as fire or emergency medical response and tow truck drivers on scene for an incident and its cleanup or its recovery of such items as vehicles and property. Breul added that, since 2015, ten officers have been killed while deploying tire deflation devices and three of them were killed by police vehicles which were also pursuing the suspect.

Preliminary data on a sample of 2021 crash elements indicated eight of the drivers involved in collisions or who struck officers were impaired, two were distracted, and one was drowsy. Four officers in crashes did not have their seat belts fastened.  Inclement weather was cited in only one of the crashes. Ten of the fatalities involved violation of the “slow down, move over” law in the jurisdictions.

Breul pointed out that “slow down, move over” laws are, at least, drawing driver attention to the need to give more room to lanes or shoulders blocked by an incident. But, additional public education is needed to help assure better safety.

He states body armor and wearing a seat belt can save officers, but they also need high-visibility and reflective vests worn when away from the vehicle, motorcycle, bike, or horse. Those “vehicles” should be positioned tactically to give increased protection. Create safety lane(s) space at an incident and conduct right side/passenger approaches to a driver in the vehicle, he adds, to avoid being hit or sideswiped by a car which has not slowed or moved over to another lane. Breul recognized that black police vehicles are growing in popularity among many agencies, but he urges that these should be conspicuously marked with ample reflective markings on the vehicle, especially on the rear; otherwise, the vehicle might not be seen by an approaching driver until it’s too late, especially at night or in inclement weather.

Just as officers have sessions for firearms training, Breul says they should also have vehicle and pedestrian awareness training to learn how best to position themselves safely when managing traffic at and near an incident.

Michelle Atwell pointed out that almost 7,000 fatalities occurred in the past year involving pedestrian and bicycle safety among the general public. She added that, for many, walking is a preferred mode of “transportation” for exercise, economy or even as the only way to get from point A to point B. And, sometimes, there are long areas of streets where there are no traffic signals or intersection crosswalks, so walkers take a chance at crossing an unsafe street. The problem compounds greatly in the dark when visibility is reduced and where street lighting is not adequate. She urged working with city and county officials to provide crosswalks, signals, lighting, and speed limits which will help pedestrians stay safe. And, those “pedestrians” include officers whose work at an incident may pose the same hazards of driver inattention, impairment, distraction, speed, weather problems, etc.

Wil Price said officers should regularly participate in training courses which emphasize how to stay safe at the site of an incident. And, there should be, where possible, another officer at the site to catch the distracted driver who is not “slowing down” or “moving over” from the lane nearest an incident. “Struck by” fatalities and injuries to officers, emergency personnel and even bystanders can be reduced with more study of information about such incidents and what can be done to improve safety.