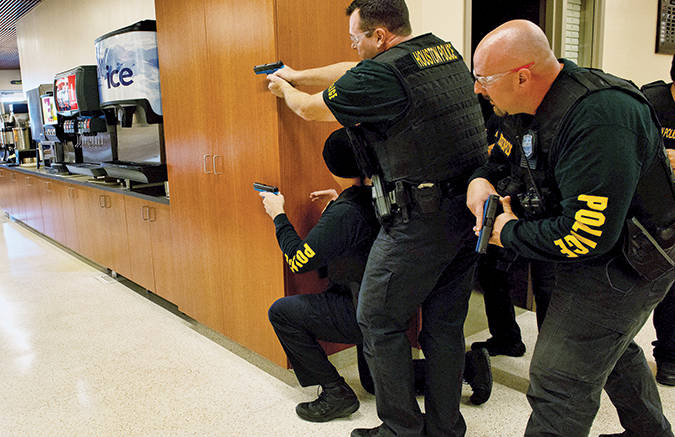 “Not possible,” you say?

In fact, I think you can, due to confusion between static square range competition-influenced training and training for the real world of the street. Before you start sending hate mail, let me clearly say that I’ve come to believe that people training for the real world have a lot more to learn from competitive shooters than I had ever believed possible prior to several years ago. But, shooting at speed is one area where competition-influenced training may lead us astray.

Here’s the bottom line: Any decision to shoot in a defensive situation requires that we (1) see a potential threat; (2) assess it; and then (3) shoot it or not. (I’m combining the first two steps of the OODA [Observe, Orient, Decide, Act] loop into “see” here.) Most training isn’t concerned with the “assess” part of the equation and training without assessing is programming ourselves to skip this step – with potentially dire consequences.

Look at the most realistic of the competitive shooting sports: IDPA. Even here, almost anything moving is moving at a constant speed; the shoot and no-shoot targets are always indicated in the same way; shoot and no-shoot targets don’t unpredictably change into one another – certainly not at reaction time speeds; and shooters get a walk-through of the stage prior to shooting it. Also, the range is almost always, at most, 180 degrees and certainly not 360 x 360. None of this approaches the potential complexity of the real world. Finally, the consequences of a missed shot or shooting a “no-shoot” in a match are not consequential; in the real world, it couldn’t be more consequential.

Imagine a match in which there is no walk-through; you have no idea how many shoot targets there are, nor how they’ll be indicated; no idea how many no-shoot targets exist, nor where they might be; the physical environment you are going into isn’t known; the event takes place in low light; both shoot and no-shoot targets move erratically and change into one another with the slightest perceptible movement at lightning fast speeds; “targets” and colleagues are shouting often critical information at you which needs to be processed immediately; and a missed shot is always a potential “no-shoot” shooting because you can’t see all of the no-shoot targets. How would you like to shoot that match?

Well, cops shoot these all too real “matches” every day. And, there, in the real world, it often takes a good half second or more to register what’s happening.

Training (which is to say programming ourselves) to shoot faster than we can assess what’s going on in front of our muzzles is a recipe for disaster. On a static square range, I can’t assess a changing situation in front of my gun at faster than about .33 splits. (For a very simple example, what I mean here by “assess” is forcing myself to see and register the shape and color of a previously unseen target before making the commitment to pull the trigger again.) For reference: An eye blink takes .33 seconds. I’ve read in several places that LAPD SWAT – one of, if not, the most active TAC teams in the country – had determined that less than 0.4 or 0.5 seconds between shots was too fast to assess what was happening in front of their guns in a truly dynamic situation.

Predictably, when I’ve voiced this opinion, it didn’t take long for someone who clearly had never had to impose his/her will at gunpoint on a volatile, dynamic, violent, chaotic situation to criticize this relatively “slow” standard. Here’s that criticism (paraphrased) with my rejoinders:

So far, we’ve talked about shot to shot times, but what about the initial shot? In competition-influenced training, you want to get that first shot on target just as fast as possible. In the real world, an accurate assessment has to be made first as to justification and necessity.

Here’s an example of how training to shoot fast (and accurately) can lead to disaster in the real world. A firearms trainer for a large agency told me that he once interviewed an officer who had been in a recent shooting and whether it was a good shoot or not was still somewhat in question. Just prior to this shooting, the officer had returned from a school which extensively used a mechanized device which could be programmed to present steel targets for arbitrary periods of time. The idea was to notice the target being presented and hit it before it disappeared. These are, to be sure, profoundly humbling systems and they build fast and accurate shooting like nothing else. In some cases, the presentation times were so short that you had to have the gun up and pointed in the target’s direction (violating Rule 2) and have your finger on the trigger (violating Rule 3) in order to hit the target in time. Unfortunately, this kind of training programs a shooter to pull the trigger as soon as they see anything which might be a target, with no time to assess threat level and justification.

So, going back to training, if you train to follow one shot with another as fast as you can hit a static target, or to shoot a target as fast as possible upon presentation, then you clearly aren’t allowing enough time for front of muzzle assessment in a dynamic environment. If you train this way, you’ll likely perform this way for real and, possibly worse, since you will probably shoot faster under actual assault and stress – and miss more – than in practice. Anyone who has ever had to draw his/her gun in a real, dynamic situation will tell you just how confusing and difficult to assess the whole mess is.

The lesson is, I think, to integrate as much realistic, shoot/don’t shoot judgmental training into our routine as possible, devoting as much time to it as to developing speed. Even simplistic blue gun scenarios will do. There are times in the real world when getting a first (or multiple) shot(s) on an assailant as fast as possible is called for, but there are also times when we need to first take the time to assess whether we are justified in taking a shot right now.

Ralph Mroz was a police officer (part-time) in Massachusetts for 20 years, seven of which he was assigned to his county’s drug task force. He has taught at a number of national, regional and international law enforcement conferences. Ralph now has three books available on Amazon: Street Focused Handgun Training (Volumes 1, 2 and 3), as well as two republished books, Defensive Shooting for Real-Life Encounters and Tactical Defensive Training for Real-Life Encounters.