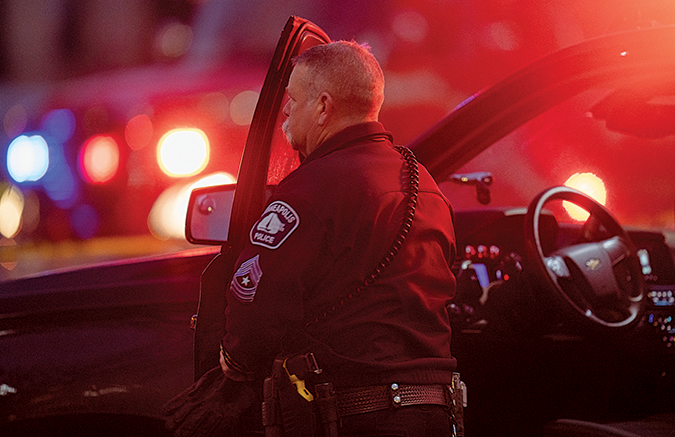 What priority does traffic enforcement have in your agency compared to other activities involving life, property and community service?

A low priority might reflect a statement such as, “We’re too busy with other work.” Maybe, it is the lament of, “We don’t have enough staff to do traffic.” Perhaps your current employment scene is seeing the retirement or resignations of too many staff. Or, perhaps there’s a perception that traffic enforcement will lessen the harmony between the police and the community they serve.

Whether they are real or perceived ideas, traffic enforcement should play a key role in a police agency, says Art Amato of the Missouri Eastern Region for the National Law Enforcement Liaison Program/Governors Highway Safety Association. His reasoning is based on the facts that traffic enforcement reduces crashes, prevents crime, helps solve some specific crimes, and reduces harm to people and property in the community being served. Crashes are “not ‘accidents,’ ” says Amato, but primarily the result of human behavior and human error.

High Speed Driving Can Be Deadly

Behavior and error can lead to speeding and he adds that, for every ten miles per hour over 50, the risk of death doubles and perception and reaction time are adversely affected. Also a result of poor behavior and error are alcohol and/or drug impairment, distraction and driving unrestrained by seat belts and shoulder harnesses.  He points out that, despite the fact that the pandemic lessened the number of drivers on the roads, traffic deaths actually reached a 13 year high during the pandemic. Nearly one third of all vehicle-related fatalities were due to excessive vehicle speed, according to the Governors Highway Safety Association (GHSA).

As to distracted driving, even though some areas are seeing a reduction in the number of drivers using cell phones, many drivers are still manipulating their phones more than in the past, doing such tasks as texting, Internet browsing, navigation, or finding audio/music, according to the Highway Loss Data Institute.

And, the traffic deaths are not just among drivers. Amato points out that pedestrian deaths soared in 2020 by 21 percent – the largest ever year-over-year increase, according to the GHSA.

Amato states, “Traffic enforcement is the one area of law enforcement when you are doing exactly what you swore you would do – saving lives. So, why aren’t we doing more?” He says some agencies lessen traffic enforcement because of staffing problems, low priority, lack of community support, being too busy with other police work, or overtime costs. Yet, there were 36,680 auto-related fatalities nationwide in 2020 and some, if not most, of those might have been avoided by the relatively simple measure of increased traffic enforcement. Among children aged 0 to 20, in 2019, 3,891 were killed in motor vehicle crashes and 2,184 were killed in alcohol/impaired driving crashes, numbers far higher than the 424 pedestrian fatalities among the age group and the 86 bicycle fatalities. Amato emphasizes that, clearly, vehicle crashes were the most common for the age group’s fatalities and, once again, some of those fatalities might have been prevented with better traffic enforcement.

Among young adults aged 16-34, 51 percent of their vehicle crashes saw the young adult unrestrained by a seat belt/shoulder harness – one of the highest percentages for all age groups.

Amato adds that at least 42 percent of police officers killed in vehicle crashes over the past three decades were not wearing their seat belts. Seat belt use could not be determined in nearly 13 percent of the fatalities which suggests an even higher level of noncompliance, says Amato. Yet, beside the fact that seat belts are a statutory requirement nearly everywhere, officers need to set an example and enhance officer safety by wearing a seat belt because of the law and/or agency policy particularly related to insurance matters. “Trees and poles kill more officers than gunfire!” Amato states.

Traffic enforcement creates a better and safer environment, preventing harm to lives or property. It should not be thought of as a way to raise revenue or harass the public, emphasizes Amato. Besides the safety factors, he says some traffic enforcement stops have helped solve or prevent other crimes, locate stolen vehicles and find fugitives or uninsured or distracted drivers. He says, “The goal of all law enforcement should be the expectation of the public to believe they will be stopped when committing traffic violations.”

While some police speeding is justified, when it is not justified, it can result in a vehicle crash which not only affects the officer driving, but perhaps lessens the resources available for another crash scene or crime.

Amato advises working with the community, “advertising” the importance of driving safety to change community perceptions about traffic stops and, instead, showing the necessity for a “small amount of enforcement” to create a “maximum amount of change.” Drivers and the community can realize that the police are trying to make the roads safer by enforcement, citations and warnings. And, some work can be done by warning signs and messages on automated signs telling of such things as areas or corridors prone to vehicle crashes, severe weather warnings, reminders about distracted driving dangers, and so on, says Amato.

Warnings (instead of a citation) can be appropriate, with the officer pointing out that the goal is to get the driver back home safely without injury or worse. It is a discretionary call to give a warning, but Amato adds that, with teen drivers, warnings are usually ineffective and just thought of as “getting away” with an offense which could have been cited.

As to impaired driving, Amato feels it could be “100 percent preventable” because it only occurs when an individual makes a conscious decision to ingest a substance, then chooses to operate a vehicle. Drugged driving is surpassing drunken driving in many areas, he says, adding that loosening of regulations regarding the availability of medical and recreational marijuana and the increased use of opioids are exacerbating the problem. In a recent National Highway Traffic Safety Administration survey, 16.6 percent of drivers tested had drugs in their body systems. Drug impaired driving sees increases in such driver behavior as speeding, weaving and crashes.

Dedicated, high visibility traffic enforcement can be linked with overlays of data about crime hot spots (such as vehicle thefts, burglaries, vandalism, thefts from vehicles, etc.) and traffic hot spots, says Amato. Traffic enforcement can help reduce crime as well as traffic crashes. It also lessens the impact crashes have on other drivers who must wait out a crash scene or find alternate routes around a crash scene. And, of importance, it helps first responders to have unhampered emergency/medical response access along streets and highways.

For more information on traffic enforcement, Amato recommends the

“You may never know who you save,” says Amato, perhaps even yourself, spouse or children – but traffic enforcement needs to play a role in your agency.