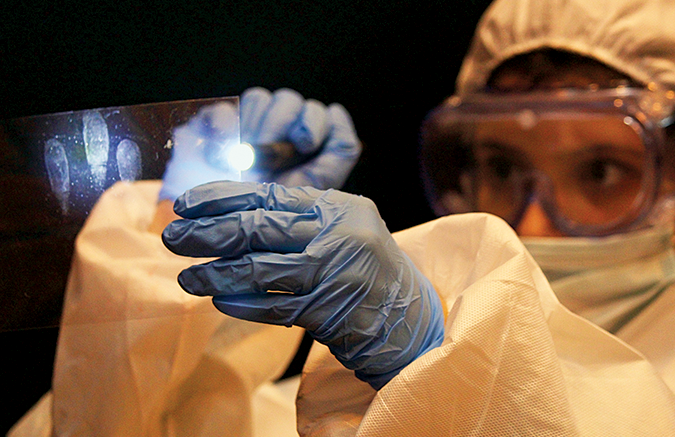 Like most endeavors in science, forensic technology develops new techniques to solve problems and improve processes. Here are some of those recent examples.

Ground-based crime scene analysis can be effective, of course, but adding in the help of drone-mounted assistance may mean better efficiency and speed in analyzing a scene. And, unlike ground-based techniques (i.e., taking photos, creating maps and charts, sketching, laser scanning) which might contaminate a crime scene because someone has to walk through it, drone-mounted technology may eliminate such contamination and the possibility of exposing someone to potential hazards.

Using terrestrial scanning methods with drone-mounted motion photogrammetric sensing and LiDAR (Light Detection And Ranging), the researchers collected both quantitative and qualitative data at staged crime scenes in both daylight and at night. The terrestrial laser scanning took longer and had “blind spots” where scan positions or obstacles blocked a full view. The drone-mounted scans had no blind spots, but sometimes had low levels of distinguishable detail. Reduced detail from both methods occurred under night light conditions.

The research concluded that investigators and juries viewing data from drones could view a crime scene in a more complete and virtually unaltered state. But, the study added that, the better the LiDAR system equipment, the more likely performance would be enhanced in capturing data and images.

Evidence at a crime scene needs to be documented and there must be reliable data collection in order to be used in court. Traditional methods of data collection are now being augmented by three-dimensional laser scanning which produces quality images and precise measurements. Alas, three-dimensional laser scanning is expensive and you need a well-trained person to do it correctly, but it is superior to the less expensive two-dimensional methods of informing and convincing investigators and juries. Acquiring this technology may be worth considering.

To that end, the NIJ supported research at the University of Tennessee to examine cost/benefit considerations of three-dimensional laser scanning versus traditional crime scene documentation (two-dimensional topographic diagrams, photos and sketches).

While expensive and time-consuming in terms of equipment and user training, the study implied that data from three-dimensional scanners can be accurate and reliable in court and can rank as the preferred method of documentation of different angles at a crime scene, leaving nothing to conjecture.

Missing and unidentified person cases top 600,000 annually in the US. Nicknamed the nation’s “silent mass disaster,” many (if not most) cases are resolved quickly, but some are not. The Department of Justice’s “National Missing and Unidentified Persons System” (NamUs) is a database established for information and case characteristics about such persons.

The NIJ found that there was a lack of empirical data about whether some cases are violence-related. Also lacking data is the question of whether there is a disproportionate number of Native American Indian and Alaska natives in missing and unidentified persons cases.

Using keywords, researchers at the University of North Texas Health Science Center mined the NamUs case entries to classify them as violent or nonviolent cases. Examined were the manner of death, DNA availability, age of the case, and types of violence. The researchers found that the level of violence was lower than expected at about ten percent of all missing person cases and that most missing person cases were resolved with the person found alive in either violent or nonviolent cases.

For females, the highest number of missing person cases – whether violent or nonviolent – were persons under age 18. For males, the cases were more evenly distributed across age groups.

The research could not draw any definitive data about Native American Indian and Alaskan native cases in the frequency of missing and unidentified persons.

Recommendations from the study point toward using more particular biometrics, DNA analysis, fingerprints, and dental information. But, the study emphasized that NamUs is an ever changing data collection and that case entries might not indicate whether violence was a factor in the individual case.

The NIJ award for the study is 2016-MU-BX-K007, “Cases Associated with Violence in the National Missing and Unidentified Persons System,” by Steven Hafner, B.J. Spamer and Bruce Budowle.

The NIJ has published a guide to help DNA forensic labs cope with both rising costs and the rising demand for timely and competent analysis. The guide is titled, “National Best Practices for Improving DNA Laboratory Process Efficiency,” and lists 67 recommendations for enhanced lab work.

The guide can be downloaded at https://tinyurl.com/2p885jc2 (PDF)

The Forensic Technology Center of Excellence of the NIJ has created a training framework to certify law enforcement officers in presumptively identifying drugs while in the field.

In the US, drugs and certain chemicals are classified in one of five schedules, depending on their medical use and their abuse potential. Forensic laboratories confirm these substances after screening with a variety of methods, but recent technology has created screening techniques which use portable instruments for testing in the field.

Among the results of these pilot programs were conclusions such as keeping testing protocols simple and easy to use, especially afield; doing annual and even periodic training in correct testing protocols; and collaborating data with prosecuting attorneys and crime laboratories in the jurisdiction.

Details about the commercial drug testing kits, training, the implementing of field testing capabilities, and the use of portable testing devices can be found at forensiccoe.org at “Model Strategies for Field Drug Testing Programs.”