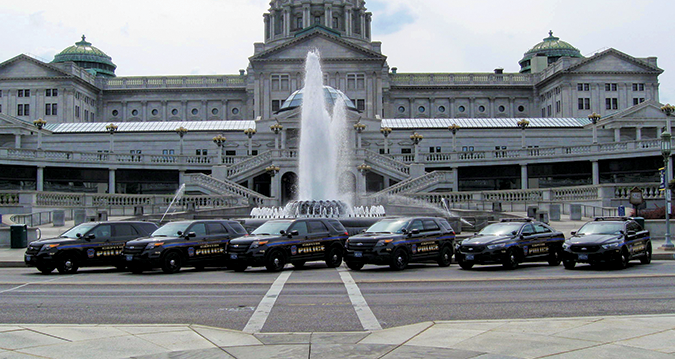 Where Have All the Cruisers Gone? (And Where to Find Them)

Any of us who have worked the streets have heard this tired mantra too many times from a concerned citizen: “It never fails, there’s never a cop when you need one.”

Well, due to the times we’re living in (COVID Part Three; shipping containers scattered all over the Pacific; runaway inflation – the highest in 40 years; running looters; and semiconductor chips scarcer than good news from the White House), I’ve changed the mantra to: “It never fails, there’s never a cop car when you need one.”

We all feel the pain. Even in my corner of God’s country (NW Arkansas), departments are hurting, too. Sure, we don’t have blocks of businesses burning, mask and vax mandates, or new protests every week by the “alphabet” groups; the only de-funding folks down here want is the price of gas to return to where we were a year ago…and new police cruisers. Cops here are in the same bind as departments across the country…no new cruisers to be had.

Most of the blame can be placed on the semiconductor chip shortage (we’ve written about that before) which originated during COVID Part One when overseas factories switched chip production to the more lucrative consumer electronics. Now, the chip shortage has been compounded by a parts supply chain which has failed worse than whoever thought the Yugo was a good idea. Automotive companies around the world are in the same boat, too…just price new and used cars, SUVs and trucks of any make at your local dealers. When production eventually ramps up, LE agencies will get a double dose of “aw sh..” because production of the more expensive (i.e., profitable) civilian models takes precedence over fleet vehicles which includes those cruisers you need. It always has and it always will. It’s a sad reality departments have experienced since the introduction of police-specific models in the 1950s.

A third reason cop car production is slowing is because North American manufacturers are shifting a portion of their R & D (and subsequent production) to building hybrid and electric cars, SUVs and pickups due to the promise of humongous federal handouts and the push for “green” vehicles, despite the fact that our electrical grid is many years away from being capable to support them.

Most departments in my area have not received the vehicles they ordered and need for replacement of aged units. Running cruisers beyond a couple 100K miles can result in more expensive repairs and even longer response times. The Rogers Police Department is waiting on vehicles ordered in January; the Bentonville Police Department has eight replacement units on order; ditto for the Washington County Sheriff’s Office. A local GMC dealer is still waiting delivery of vehicles to fill more than 100 orders placed last October, December and January.

Departments have had to get creative to fill their parking lots. Many have resorted to buying used cruisers and, of course, used police car dealers have been eager to help…and the asking prices show it. In our rocket rate inflation at press time, used car prices have increased by 31.4% over a year ago and used CVPI increases are more than that. A quick review of online vendors shows some used Crown Vics selling close to half of the original MSRPs! That ain’t bad for a car which hasn’t been in production for over ten years! To increase the impact on your budgets even more, most CVPIs still available are out of warranty and parts are drying up.

One used police cruiser purchase option you might want to check out is a GSA auction near you. The US General Services Administration Fleet leases vehicles to numerous alphabet federal agencies (FBI, DEA, ATF) and, when the vehicles meet retirement criteria, they are offered for sale via auction. I’ve been on assignments when I drove FBI and DEA police package cars and can attest to the fact that their service policies are excellent. Every year, the GSA auctions 30,000 vehicles at locations nationwide.

GM and Chrysler recently opened ordering periods for Tahoe, Charger and Durango Pursuits (respectfully) and those periods expired in a few hours. (These are for 2022 vehicles which are carryover 2021 models.) Production for them is scheduled to resume sometime in early 2022, but MSRPs have yet to be announced.

Unfortunately, I can’t give you any suggestions about how to expedite orders, but I can give you some options for when production resumes.

When the new police cars start rolling out of the factory doors, smaller departments may still have problems buying them. There is a definite “pecking order” in the way new vehicles are distributed. Large volume new car dealers with “sold” orders and volume buyers, like Enterprise, will likely be first, followed by state patrols and large departments. You may be able to “piggyback” a large order from your state patrol for a few units or find a few at out of state dealers, but the future is still bleak.

A viable option to purchasing, although not new, is to lease police vehicles and it is gaining in popularity. As new cruiser prices increase to more than what many of us paid for our first homes, the dated notion of “run ’em until the wheels fall off” is no longer fiscally practical or even wise.

If you need to update a portion of your fleet or initiate a replacement program, leasing can be another option you should check out. Of course, Chrysler, GM and Ford have offered fleet leases for years through their dealers, but leasing companies in the public sector deserve a look as well. Although similar, they all have different options and programs which may surprise you. We have reviewed three of them for you which feature different lease programs.

Enterprise started in 1957 with seven cars and now they are the largest buyer of new vehicles in the US. They currently own 1.85 million vehicles, 600,000 in their rental fleet (44% of the market) and 135,000 in their fleet operations. Their Fleet Management has offices across the country and they lease police vehicles nationwide. The leases are generally three to five years, with a turn-in at 60,000 miles. At 60K, customers have the option of paying off the balance of the lease and keeping the unit, or returning the vehicle where Enterprise will sell it at fair market value and credit the funds back to your department. In a perfect world, Enterprise normally promises a 90 day delivery on orders, but they are affected by the chip shortage, too. We were unable to find information about upfitting, paint schemes, graphics, and models available as these particulars are negotiated on an individual basis with the leasee.

If you are looking for a one-stop shop to buy or lease turnkey police vehicles, look no further than John Jones Police Pursuit Vehicles. Conveniently located in the Midwest, they ship LE vehicles wherever needed and their units can currently be seen “protecting and serving” in 38 states. They are a dealer of both GM and Chrysler product lines, selling Tahoes, Charger and Durango Pursuits and the RAM® ProMaster. They also sell used vehicles and accept trade-ins on sales or leases. They stock a large inventory of emergency equipment and can install it in their state-of-the-art up-fit shop. They also offer service with factory trained technicians for units they have sold or leased, as well as for local departments.

I interviewed John Konkler, LE Sales Director, for the details of their Municipal Lease program. In addition to the vehicles normally kept in stock, they can provide any specialty vehicle or equipment you may need. They feature flexible lease payment schedules (monthly, quarterly, semiannual, or annual) to match your budget requirements.

The exciting feature of their operation is that they can build you an LE vehicle tailored to your specific needs to match your existing fleet or they will build you an all-new custom fleet. They can build marked or unmarked units from the Chevys and Dodges on site, or prisoner transports, CSI or SWAT vehicles from the RAM ProMasters. Their warehouse stocks a vast inventory of emergency equipment which includes Whelen, Federal Signal and SoundOff lights, lightbars and sirens; Havis consoles; TruckVault SUV storage units; and Setina, Havis or Pro-gard prisoner partitions and seating. Their spotless up-fit shop will install the equipment you order and install your radios, too.

Their full bodyshop can match your current paint scheme (in either paint or vinyl wrap) or create a new one for you. They will install graphics you provide or duplicate them with their in-house graphic designer. They can even tint windows if needed. The popular RAM ProMaster vans can be converted into 12 prisoner transports utilizing different configurations of up to three partitions with seat belted seating, custom lighting and interior camera systems, as well as install exterior emergency lighting and department graphics…a far cry from the paddy wagons I drove in the day which only had a plywood partition between me and the bad guys. The ProMasters can also be built into numerous custom variations you need, such as CSI, SWAT or mobile command posts.

All up-fit work is 50 state compliant, comes with a 12 month warranty and does not void factory warranties. New vehicles carry the full factory warranties. Sedans and SUVs are built to your satisfaction and can be financed, including up-fit. John Jones Police Pursuit is a one-stop shop for all of your LE vehicle needs.

First Capital has 35 years of experience in government fleet financing/leasing, but they have no inventory and do not offer up-fitting. Their program is very different, as explained to me by Bob Arnowitt, Lease Manager. You negotiate your own vehicle purchase from a favorite dealer or state contract provider, whomever you trust; purchase emergency equipment from a vendor of your choice and have it installed; and First Capital will then lease-to-own you the entire package. Their fleet leasing spreads the vehicle and equipment cost, plus up-fitting, graphics and even weapons over three, four, five, or six budget years in increments you chose, and the first payment is determined by the start of your fiscal year.

Departments appreciate the “pay as you go” plan which avoids the upfront expense of buying and equipping a new vehicle. Your department owns every vehicle and everything installed in it. The title transfers to the agency the day the vehicle is delivered AND is titled in your city or county’s name where it remains until the end of the lease, just like any other cash purchase and unlike most lease programs.

Your agency has four options after you make the last payment (or prepay): 1) trade in your cars on a new purchase; 2) sell your cars yourself; 3) re-task them (to other city departments); 4) continue using them at no cost forever. No vehicles or equipment are returned to First Capital – ever.

The highlights of First Capital’s program include that the benefits apply to any size fleet – two to 200 vehicles; purchase can be made from any dealer; unlimited mileage, use and hours; no maintenance or condition requirements; and no end of lease payoffs, residuals, buyouts or balloon payments ever.

We’re all hoping our economy recovers from the current crisis, inflation disappears, vehicle and fuel prices return to the levels of a year ago, and we get a handle on the current crime wave. The latter can’t happen without more cops on the streets who are respected, supported and paid a living wage, and enough vehicles to get their job done. We sincerely hope this column helps you with that last goal. God bless America’s finest!

Sergeant James Post is a 27 year veteran of Midwest police departments and has written this column for 24 years. He always appreciates your comments and ideas for future articles and can be reached at kopkars@arkansas.net.