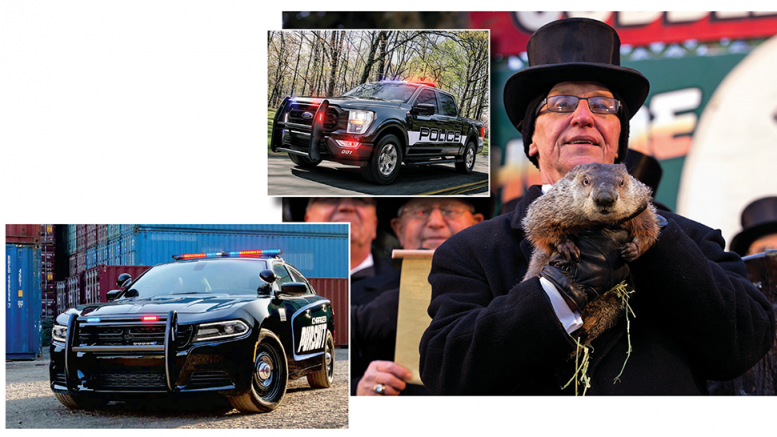 HEADLINES YOU MAY HAVE MISSED

I don’t know about you, but does today feel like it’s 2020 all over again?

It’s like we’re living the movie, Groundhog Day – every day is déjà vu. COVID is still here; masks on/masks off – who the hell knows what to do as the CDC changes guidelines hourly. Cities are still burning, killers are still killing, looters are still looting, and the men and women in blue are still dying in record setting, heartbreaking numbers. It seems nothing has changed in over a year. Not to start this article on a downer, but it’s pretty bleak outside my window, folks, and it’s not the weather.

So, while I close the blinds, here are some headlines you may have missed while you were reloading.

This is my (early) obituary for the last true V-8 police sedan – the Dodge Charger Pursuit. Like the obit I wrote in 2012 of the demise of the Ford® CVPI, this notice is also written with a heavy heart. Having spent my entire LE career behind the wheel of LE V-8 sedans, I have become a fan of the Charger, but I fear its future is bleak. The Charger is not being unceremoniously axed like the CVPI was. This is all about economics, the world we live in and the world politicians want us to live in.

Departments are shifting to SUV platforms, hybrids and even trucks, and electric vehicles are in our near future, so the writing is spray painted on the precinct wall, folks.  In my last article, I quoted Tim Kuniskis, Dodge Division CEO, who predicted that the popular HEMI® V-8’s days are numbered because federal regulations will ultimately kill them off and he sees the electrification of the Dodge line coming. Already for the 2021 model year, agencies can no longer purchase the HEMI Chargers with AWD as it is now only available in the 3.6L V-6. While David Callery, Program Manager for Dodge Law Enforcement, is encouraged by sales of the Charger and Chrysler’s Police Advisory Board requesting the company “not to abandon the sedan market,” the demise may still be inevitable.

Ford has now earned bragging rights to the title, “America’s only pursuit-rated pickup,” with their all-new 2021 F-150 Police Responder®. Plus, in recent tests, the trucks recorded the fastest 0-60 mph, 0-100 mph and quarter mile times of any police vehicle! Ford attributes these results to the increased torque of the new Torque-On-Demand® 4X4 transfer case and its automatic four-wheel-drive mode which constantly adjusts torque to the front or rear wheels as needed. Powered by the proven 3.5L EcoBoost® which produces 400 hp and 500 foot pounds of torque coupled to a ten- speed automatic, the truck has a top speed of 120 mph and runs on specifically developed Goodyear 18″ Wrangler® Enforcer all-terrain tires.

Takin’ It to the Bank

Ford’s sales of electrified vehicles exploded 117% this June, setting a new half year sales record with the sale of 56,570 vehicles, including 12,975 Mustang Mach-E sales. The Mach-E is selling as soon as they arrive at dealers, Ford reports, with 2,465 units sold in June alone.

Several police departments have added all-electric Teslas to their fleets since our last article, including Eden Prairie, MN; Wolfeboro, NH; Gates Mills, OH; and Westport, CT. All are being evaluated for patrol duties with test results to be published.

Is Your Cat Missing?

We’re not talking about your furry friend, but your vehicle’s catalytic convertor. Cars and trucks have been equipped with “cats” as emission control devices since 1974, but once thieves and salvage yards discovered they contain precious metals, thefts started and they have skyrocketed during the global COVID “lockdown.” Starting in March of 2020, theft claims increased 293%, with payouts to insured going to $33.7 million, up from nine million dollars in the prior 12 months.

Have I got your attention? Why are these things so damn valuable? To do their dirty work, they all contain a cocktail of rhodium, platinum and palladium, making them more valuable to scrap dealers than your wife’s diamonds. Palladium went from less than $500 an ounce in 2016 to a record of $2,875 in 2020 and rhodium saw an even greater increase, going from $640 an ounce to a whopping $21,900 an ounce during the same period – 12% more valuable than gold! A replacement convertor can cost you anywhere from $900 to $2500, or even more if your O2 sensor is damaged. California ranks number one in the US for thefts (three out of ten insurance claims) with Texas being second (one out of ten claims).

And, here’s the kicker: A convertor theft is faster than a bank robbery and more profitable than a 7-Eleven stickup. Thieves simply roll under your car, truck or mom’s SUV and, using a cordless SAWZALL® (or other brand) reciprocating saw, cut the tail pipe fore and aft of the convertor and run. The theft takes about two minutes or less and weather or time of day is not an issue. Vehicles in the greatest danger are those in large parking lots, particularly long-term lots, apartment complexes and being parked in your station lot does not get you a free pass, either.

From the Big Apple

There’s always news from the NYPD which can be good, bad or bizarre, but always interesting. For example, a new city law recently removed the enforcement of illegal street vendors from the NYPD and gave it to the Department of Consumer Affairs and Worker Protection who lack the authority to confiscate goods. The New York Times reports that one shopping district with 230 legit businesses recently counted 242 unlicensed illegal sidewalk vendors peddling water, jewelry, masks, toys, and counterfeit goods without apprehension. One businessman said that “it looks like a bazaar in Istanbul” and the new “enforcement” unit won’t even be operational until September.

If your department operates its own body shop and garage, here’s some information you can use. During the civil unrest (aka riots) of 2020, the NYPD had some 375 vehicles vandalized, including more than 600 windshields and other glass destroyed. Recently, the NYPD Fleet Services created a salvage area where every usable OEM part is removed from salvaged vehicles, inventoried and stockpiled to be reused on other vehicles. This includes body parts like fenders, doors, hoods, glass, and more, as well as lightbars and electronic equipment. Reusing salvaged equipment has allowed the department to purchase more vehicles and save $5000 on every new vehicle it purchases.

I’m not talking about potato chips. It’s the semiconductor chips which power as many as 80 different vehicle computers which control everything from touch screens to transmissions, including crucial safety devices. The global pandemic caused concern among chip manufacturers in Japan and Taiwan that auto sales would decrease, along with manufacturing, so they switched to building chips to meet the demand of consumer electronics by stay at home buyers. In fact, global chip sales are expected to grow 8.4% from 2020 to 2021.

In addition to the chip makers underestimating US car and truck sales and employees being furloughed because of COVID, the third largest automotive chip supplier, Japan’s Renesas Electronics, was nearly destroyed in a massive fire, all of which has caused the worldwide shortage. While thousands of chip-less cars and trucks sit in assembly storage lots, docks and at rail heads around the world, the ripple effect is empty new car lots all over our country and used car and truck prices have quadrupled. This also has a direct impact on police vehicle availability. Most orders for the 2021 MY police vehicles were suspended early and Ford projected they will produce 1.1 million fewer vehicles this year. The Bancorp Bankhas projected that the new vehicle shortage will continue through the third quarter of 2021 or even into 2022. So, plan on fleet replacements taking a while. The bottom line is: Keep your fleet clean, serviced and your repairs made quickly because your troops will likely be driving them for a while.

For officers who have resigned or retired during this crisis, do not fear. Florida Governor Ron DeSantis announced in July that police officers from around the country are “welcome to relocate to Florida for a better workplace culture if they feel disrespected or disenchanted.” That, combined with spectacular ocean sunsets, bikinis and NO STATE INCOME TAXES, makes this a no-brainer.

Sergeant James Post appreciates your comments and suggestions for future columns. He can be reached at kopkars@arkansas.net.