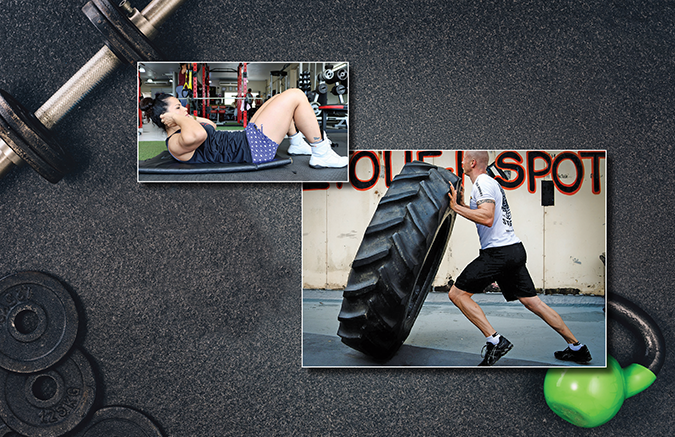 We require officers to be in shape to start their careers; why not require them to stay that way?

A subject which has been discussed vigorously in police circles is that of career physical fitness standards for police officers. As disheartening as it is, some of the young men and women coming into police service today are in such poor shape that standards have had to be dramatically lowered in many places. Nonetheless, the idea has stayed alive, with more agencies placing a premium (literally, with bonuses) on physical fitness.

When you really need a cop, you need physical intervention. Here’s an old academy question for you: What makes a police officer a police officer? The badge? The gun? Nope. It’s the arrest powers. That is, only a police officer can deprive a fellow citizen of their freedom. Your mayor doesn’t have this power and neither does the governor. Even the President doesn’t – only a police officer does. So, what makes a cop a cop is that he (or she) can arrest someone. Anyone can write citations; anyone can write reports; and anyone can perform investigations. Only a cop can slap cuffs on someone. Now, arresting someone is a physical activity and one in which much of the danger of the profession lies. Also, it’s during an arrest that you are most likely to get into a fight with your suspect. Common sense would indicate that you’d want to be in good physical shape to do this and common sense would also suggest that your agency would only want to have physically fit officers doing arrests. So, when you are really a cop (when you’re arresting someone), you are engaged in strenuous (or potentially strenuous) activity and physical fitness counts.

If you needed to be fit to get into the academy, then why not now? Well, at least police academies used to have physical fitness standards that weren’t a joke. Some still do. Presumably, these standards exist because some reasonably smart people (or maybe just people with some common sense) decided that cops should be fit. Well, if being fit is a requirement of the job, then it’s a requirement of the job. To argue otherwise argues for eliminating fitness standards for academy entrance to begin with and few people would argue that.

Overweight, out of shape cops are a danger to themselves. If you get into a foot chase, or just a high stress event, with a portly officer, you’d better hope you remember CPR and that there’s a defibrillator unit nearby. This is just basic health: Being overweight makes you much more susceptible to heart attacks under stress.

If they are a danger to themselves, they are a danger to you. If your paunchy partner is the guy you’re relying on to help you make the arrest, run the suspect down, or return fire effectively, and he goes down, it’s not good for either your survival or your success chances.

Police officers are supposed to be role models. This is self-explanatory.

You can do your job just fine out of shape. Well, obviously this isn’t entirely true because, more or less by definition, the physical parts of the job are better performed by physically fit officers. On the other hand, many heavy cops do just fine in street fights and many are excellent shooters. So long as they don’t overly exert themselves, they can be fine. Besides, much of the job isn’t physical at all. The fact is that most cops spend the majority of their day sedentary. This is more true as you progress up the ranks and many command officers (and some officers working special assignments) are never on the street at all and are never in any more danger, nor do they have to perform physical work more than the average citizen. In fact, some of the very best command officers I’ve worked with are on the heavy side. Several of them, in fact, I’d very much want with me in a bad situation.

Some people are naturally heavy. I used to say BS to this, but I’m becoming more aware of the simple fact that some people are genetically more susceptible to gain weight than others. On the other hand, even in those cases, diet and exercise can pretty much keep these people fit, but admittedly their diet has to be more severely restricted than it does for naturally thin people. Our society is full of crappy food and eating healthy can seem difficult. On the other side of that proposition, however, is the fact that healthy food is now widely available and requires just a little effort to get. The key is to understand the biochemistry of weight gain and there is a lot of bunk out there on the subject. MDs used to preach that all diets were fads and that it was a simple matter of eating fewer calories than you expended. We now know that’s not true and that the situation is much more complicated. I don’t want to make this a treatise on the science of weight loss, but I will say that we know a whole lot more about it now than we did just a decade ago.

Getting heavier is a fact of life as you age. This is true to an extent, since your metabolism slows down and key hormone concentrations (such as testosterone) drop precipitously as you age. But, much of this can be controlled with diet and exercise and helpful nutritional supplementation is hardly voodoo (but it is a complex topic). With a little research and good advice on the subject, you can mitigate many of the effects. Also, exercise plays a key role in mitigating age-related weight gain.

Our unions. Hey, I’m the guy who unionized my agency, so I’m hardly anti-union. But, when the unions say that we can’t be required to be sprayed if we carry OC, or can’t be required to be tased if we carry a TASER®, they do us a disservice. Likewise, when they say that physical fitness standards can’t be mandatory, they are actually hurting the members who will stay unfit and/or otherwise unhealthy.

Our lack of free time. This is the big one, I’m convinced, and it’s one for which I have tremendous sympathy. This cause – lack of free time – is intimately tied to the low pay of many police jobs. Cops routinely work forced, or otherwise required, overtime and many work overtime by choice just to make a decent yearly wage. If you only work eight hours a day or 40 hours a week, you’d have the same time available to you to get to the gym, to shop for healthy food, to go for a run, etc., as the normal person. But, if you are working two shifts a day, or four to five hours of overtime a day, well…there’s only so many hours in any day and something’s got to give.

How Do We Get Cops Fit?

There are apparently some legal issues with requiring fitness standards and, of course, there’s usually union opposition. Police officers are like all human beings in that they respond to incentives and many agencies have taken the step of offering bonuses to officers who meet a (usually fairly easy) fitness standard. Naturally, the greater the incentive, the more officers will participate. This is a great deal all around; everyone wins: the officers, the agency, the insurance carriers, and the taxpayers. So, I strongly encourage officers to push their agency to institute a generous fitness incentive.

Installing weight rooms in the agency is also a good idea in that it will get some officers to work out who might not; although, I know many officers with nice weight gyms in their department who prefer to join a local gym instead just to get out of the building.

Many tactical teams have workout time built into their paid shifts. That’s something to think about next time your contract is up for negotiation. What if you had a half hour of paid workout time every shift?

It is important to realize that, for most officers, getting and staying reasonably fit is not a lot of work, nor is it expensive. It takes some discipline, but anything that’s worth anything does. One half hour a day will usually do the trick. That’s not much to add to your life in most cases. I mean, asking someone to sacrifice two hours of sleep a night would be asking a lot, but getting up a half hour earlier or watching one half hour less of TV? I agree that not everyone actually has a half hour to give up per day, but most of us do, especially if it’s for something important and there’s precious little which is more important than our own health.

The cost is also minimal – you can run for the cost of a pair of shoes a year; weight workouts can be done quite effectively at home with just body weight exercises; and gym memberships are pretty reasonable in most places. Finally, eating right (and certainly eating less) won’t increase your food budget by much, if at all, and any increase will be offset by not eating junk.

So, career fitness standards for cops? I can’t think of a good reason why not.