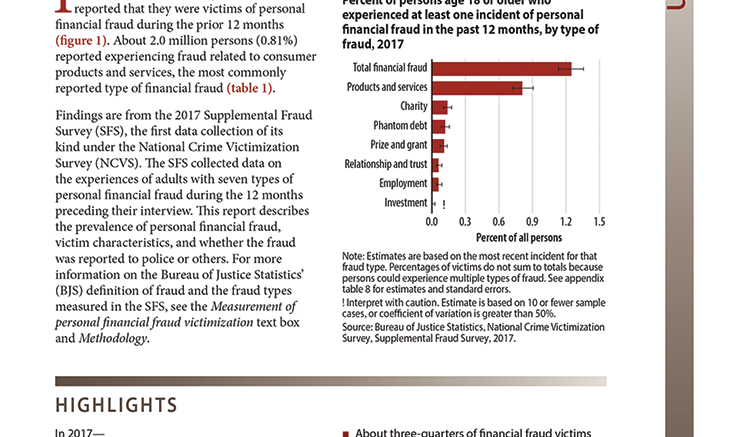 Of the two million victims (0.81% of all persons) of consumer products and services fraud – the most commonly reported type of financial fraud – about two thirds experienced fraud with a product (1.3 million victims) and one third with a service (560,720). About 340,000 persons experienced charity fraud (0.14% of all persons) in which they contributed to a bogus charitable organization or to a crowdfunding appeal under false pretenses. Of the 296,620 victims of phantom debt fraud (0.12% of all persons), approximately half were victims of a scam claiming they did not pay their taxes (94,960 victims). More than 155,000 persons experienced relationship and trust fraud (0.06% of all persons) which includes a falsified romantic relationship (49,710 victims) or a fraudster posing as a family member (45,440). Of the 150,460 victims of employment fraud (0.06% of all persons), about half experienced a scam claiming to provide a business opportunity (76,990 victims). Among the financial fraud victims, consumer investment fraud was the least common of the seven types of fraud measured.

While more females (1.7 million) than males (1.4 million) experienced financial fraud, there was no statistically significant difference in how prevalent financial fraud victimization was between them. A smaller percentage of white persons (1.19%) than black persons (1.67%) and persons who were Native Hawaiian or Other Pacific Islander, American Indian or Alaska Native, or two or more races (2.19%) were victimized.

To read a copy of the full report, visit https://tinyurl.com/4964ytaf