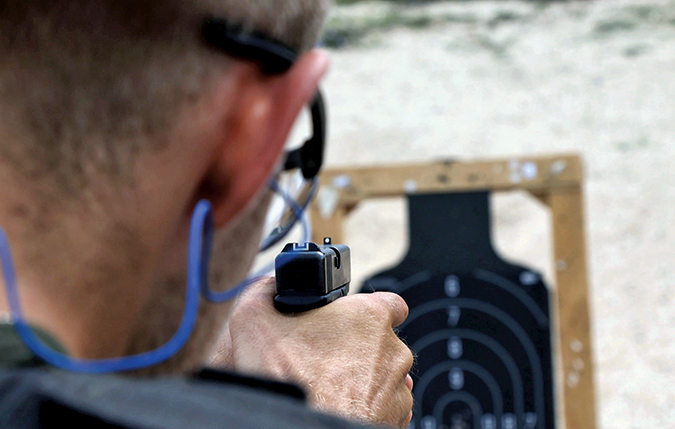 The COVID-19 pandemic has forced the cancelation of nearly all law enforcement training. This has affected in-service training, agencies hosting training courses and officers attending training conferences. As a result, it’s more important than ever to take responsibility for our own training needs.

It doesn’t matter if you’re practicing with a patrol rifle, shotgun, handgun, or any other weapon system, improving the ability to get on target, reload and clear malfunctions will build confidence in using that system quickly and competently. Increased confidence may result in an increased willingness to practice and more practice will result in significantly improved skill.

Whether we do live fire or dry fire practice doesn’t matter as much as simply putting in the time to properly work on these valuable skills.

Aside from a Hollywood action movie, all firearms will need to be reloaded at some point. Modern duty firearms are more durable and reliable than ever, but they still malfunction. And, while reloads and malfunctions seldom occur in a law enforcement gunfight, it does happen. Ask the LAPD officers involved in the North Hollywood Bank of America shootout or the agents involved in the 1986 Miami FBI shootout how they feel about being able to quickly reload or clear a malfunction and get back in the fight. Empty and malfunctioning duty weapons don’t happen until they do. And, when they happen in the middle of your fight, you’ll be thankful for the time you put in practicing those skills.

When pressed to use one of your duty weapons to save a life, the first step is getting the weapon up and on target. This may seem obvious, but few shooters put in the requisite time to practice this valuable skill. Whether using a handgun, rifle or shotgun, developing the skills necessary to present the weapon on target in a manner maximizing economy of motion is crucial. Law enforcement gunfights occur quickly and suddenly.

If drawing from a holster, the draw should be as smooth and efficient as possible. This starts with ensuring a solid grip on the handgun as high on the backstrap as possible while, at the same time, releasing all retention devices. I’ve seen too many shooters become “hood flickers.” These are the officers who move a retention hood forward in one motion, then obtain their grip in a completely separate motion. This wastes time and is incredibly slow. Once you have a grip on the handgun and the retention devices on the holster have been released, the gun should come out of the holster and up to your eye-target line as quickly and smoothly as possible. A smooth and efficient draw provides a little more time to make accurate shots. For a video reviewing some additional points of the handgun draw, check out https://youtu.be/II-OBhxnjwQ.

A shoulder mounted weapon, such as a patrol rifle or shotgun, is faster to present to the target because they’re (most likely) already in hand. But, again, this doesn’t mean we get to skip practicing presentations. Work on presenting the weapon up to the eye-target line while moving, from a variety of ready positions and different distances. When doing each repetition, make sure you’re presenting the weapon AND manipulating the safety at the same time. Don’t cheat yourself by moving the safety before the presentation. Practice good habits and give yourself the benefit of practicing skills which you may need to prevail in your gunfight.

All firearms need to be reloaded at some point. Unfortunately, most people do not practice this enough. For a lot of officers, their idea of practicing reloads is conducting an off the clock reload after a course of fire. This doesn’t tell us anything about our skill level. However, video and a shot timer can show you whether your reloads are smooth and efficient.

Basically, there are two types of reloads: reloads of convenience and reloads of necessity. As I travel around conducting training in different regions, I’ve heard a wide variety of terms used to describe these reloads. So, let’s not get too wrapped around the axle with the specific words used. The bottom line is that, if your weapon is empty, you need to reload it.

A couple of pointers when it comes to reloads. First, keep the weapon out of your face. This looks super cool on television because the director can get close-ups of the gun and actor at the same time. But, this is not your “workspace.”  Your workspace is around eye level somewhere halfway between full extension and your face. This is all subject to shooter preference, but, if you have to move the weapon a long distance to get to full extension, you will be slow to reacquire an acceptable sight picture.

A second pointer is to angle the magazine well toward the magazine pouch. This creates a straight line between the fresh magazine and the magazine well. A straight line is the shortest distance between two points, so this will help feed your weapon quicker. When working with a shotgun, turning the shotgun slightly so the magazine loading port is angled toward your support hand accomplishes the same result. There are several videos on my YouTube channel covering several different types of reloads, but check out this empty reload video as a place to start: https://youtu.be/JXsjCV4SYhg.

One last tip for speeding up your empty handgun reloads. Don’t be afraid to practice using the slide release lever to drop the slide forward after inserting a full magazine. This is much faster than “power stroking” the slide by hand and it can save you precious time. It doesn’t matter what the manufacturer calls the part, either. Different manufacturers call this part the slide stop, slide release, slide catch, or slide lock. In any event, the name of the part has nothing to do with the most efficient and quickest way to manipulate your handgun during a reload.

Malfunctions don’t happen until they do. Modern duty weapons are so dependable that, under controlled conditions on the range, we will rarely get the repetitions needed to become competent in clearing malfunctions. As a result, it requires specific practice to improve our skills. When a malfunction occurs in the middle of a gunfight, we won’t have the sudden ability to quickly and effectively clear that malfunction unless we’ve practiced it.

One thing to note is that any malfunction procedures based solely upon visual inspection WILL fail you during low light conditions. There are also procedures which rely upon hearing what the weapon does or doesn’t do. When attempting to fire the first round, the shooter may hear a “click” instead of a “bang.” However, if the gunfight is in progress and shots have been fired, there is a strong possibility that nothing will be heard due to loud noise or auditory exclusion. As a result, a more comprehensive, reaction-based approach to malfunction diagnosis and clearance is necessary.

Classifying malfunctions as “Type 1,” “Type 2” and “Type 3” does nothing to help determine what is wrong with the weapon. I prefer to break them into two categories: simple and complex malfunctions. Simple malfunctions are generally failure to fire or failure to eject problems. The simple malfunction drill is something most everyone reading this article will recognize – regardless of the specific terminology used. This immediate action response should be used as a primary malfunction procedure since this will solve most malfunctions:

A slight variation for clearing complex malfunctions is to, instead of locking the slide open, simply depress the magazine release while working the slide to the rear at least three times. This relieves pressure from the top of the magazine allowing it to drop free from the magazine well and clears the cause of the malfunction at the same time. Once cleared, reload the handgun and reassess your target. This variation is significantly faster.

If you are carrying only one spare magazine, use the first technique and secure the magazine after you rip it out. The magazine can be secured between your ring and middle fingers on your dominant hand, or you can put it into a pocket or inside the belt of your pants. After working the slide, use that spare magazine to reload. No matter which technique you use, it’s important to slow down, breathe and work the problem. With a little bit of consistent practice, you will be on the fast track to diagnosing and clearing whatever malfunction you encounter.

Former New York City Police Department Officer Jim Cirillo once told me that, during his time on the Stakeout Squad, the fastest reload was a second gun. A second gun is also the fastest way to clear a malfunction, but we may not always be able to access a second gun in the middle of a firefight. The only way to ensure you have the skills necessary to finish the fight is to practice weapon handling skills until you can perform them without conscious thought.

Improved weapon handling skills will lead to more confidence in your ability to safely and competently utilize them when needed to save your life or the life of another. Whether you’re practicing at home due to social distancing restrictions, or on the live-fire range getting some extra work in, time spent on these skills will improve your confidence and familiarity with your duty weapons. I look forward to seeing you on the range!