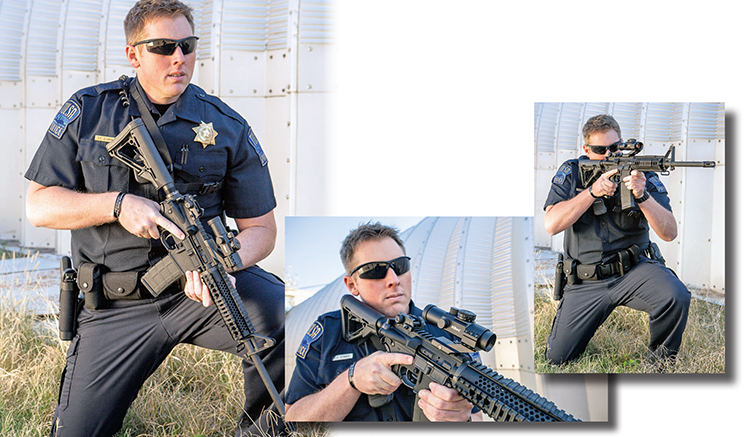 The magazine is a critical component in any semiautomatic or automatic firearm. A sizable percentage of weapon malfunctions can be attributed to magazine-related issues. This being the case, it is surprising how little attention is paid to this crucial component.

Cleaning and maintaining your magazines are just as important as cleaning and maintaining your rifle or selecting the right ammunition. If you get a magazine malfunction, test it again. If it creates a second malfunction, immediately take it out of duty until the problem can be ascertained and remedied or use the magazine for training purposes only. The best option, of course, is to simply get a new magazine. Lives depend on it.

Failures to feed are commonly caused by a weak magazine spring or a bound follower. The use of self-leveling/anti-tilt followers helps resolve follower issues, as will keeping your magazines clean.

It is important to emphasize that the above comments on black USGI followers do NOT apply to the proprietary patent pending black followers employed in SureFire® High-Capacity Magazines. SureFire followers are totally different from the followers used in USGI 30 round magazines.

Double feeds may be caused by either a dirty or weak extractor or magazine feed lip separation. When feed lips are wider than the factory spec, they can cause double feeds, including the dreaded bolt override malfunction. Failure of a magazine to drop free from the magazine well is another sign that the feed lips may be out of spec.

What many refer to as a double feed is, in actuality, a failure to eject. Correction can be as simple as replacing the magazine spring with a new one; cleaning the shellac or polymer deposited from all those cheap steel shell cases; or, in rare cases, replacing the ejector spring. Most often, proper cleaning will remedy the extraction ejection issues.

There are a number of other conditions which can cause short stroking and the same type of jam. Poor gas pressure or short duration may allow the bolt to extract and eject a fired case, but the bolt doesn’t travel back far enough to pick up the rear of the case head. This is evident when the fired case just barely clears the ejection port and the fresh case has an indent in the case body and the bullet nose is partially forward of the front edge of the magazine or may even be pushed into the feed ramp slightly. Correction for this could be replacement gas rings or replacement of the adjustable gas block/adjustable gas tube. Fired cases should eject forcefully from the ejection port and thoroughly irritate the shooter in the next position to the right (left for a properly built left- hand AR).

A true double feed occurs when one feed lip is bent up on the right or left side and will occur with every other round. This is fairly easy to detect and correct by simply noting which side the next round is positioned and whether or not a jam occurs after the first or second shot from the bent side.

If both feed lips are bent up, it will most often occur with each shot and both will need adjustment. This condition exists in poorly or non-heat-treated aluminum magazines and most steel magazines because the manufacturers rely on the inherent strength of the steel rather than using higher carbon content. Checking feed lips for dents, dings, cracks, or damage is easy enough, but also often neglected.

Magazines should also be routinely examined for wear or damage. One flawed test is to half load a magazine (15 rounds in a 30 round magazine) and smack the base on a hard surface to see if a round pops out in order to determine if the feed lips are spread and/or the magazine spring is weak. This is not a good indicator, as all magazines will release tension on the top rounds, allowing one or more rounds to pop out when tested in this manner.

Cracked feed lips can occur if a fully loaded polymer magazine is dropped from weapon height onto a hard surface and has the misfortune of landing on the feed lips. You’re also not entirely safe with aluminum USGI magazines. The feed lips on USGI aluminum magazines may not crack, but will bend under similar circumstances.

The US Army at Picatinny Arsenal in New Jersey has developed and patented a go/no-go feed lip gauge which allows anyone to quickly and accurately check for the correct maximum and minimum clearance tolerances of a magazine’s feed lips. The specs for a magazine feed lip’s clearance are: Go 454″; No-go 476″. Trying to gauge that visually with any degree of accuracy without a tool is difficult, at best.

The Army feed lip gauge has been licensed for manufacture and is now available from Brownells. The Brownells AR-15/M16 Feed Lip Gauge (080-000-744WB) may be used on any STANAG-compliant magazine, whether metal or polymer.  For those of you using Magpul PMAG®s, it should be noted that PMAG dustcovers double as a go/no-go gauge for PMAGs. Using a go/no-go gauge eliminates all guesswork.

If the feed lips are out of spec, either discard the magazine or, in the case of aluminum magazines, use Brownells Magazine Feed Lip Tool (080-000-314WB), which is available separately, to bend the lips back into spec. Trying to do this with pliers can result in unrepairable damage to the magazine.

The Feed Lip Tool will help get extra life out of otherwise unserviceable magazines. Feed lips can develop cracks, so proceed carefully. Magazines with reconditioned feed lips need to be clearly marked and consigned to training/range use only. I mark mine with a big “T.” There will be metal fatigue in bent feed lips. Never use them for duty.

The use of a magazine loading/unloading tool will not only save time and your thumb, but, more importantly, it will eliminate stress and wear to the feed lips from loading and unloading magazines, lengthening the service life of the magazine. There are a number of excellent loaders on the market. Some also double as unloading tools. You can also use the standard USGI stripper clip guide.

Magpul Enhanced Self-Leveling followers are a drop-in replacement for the USGI black or green followers. They are available separately in three packs in your choice of green or yellow. USGI magazines with tan followers employ a proprietary spring which attaches in the middle of the follower and cannot be used with standard springs.

Magazines will need to be periodically disassembled for cleaning and further inspection. It’s important not to overdo this as routine disassembly will cause unnecessary wear. Magazines don’t need to be cleaned after every range session. After a high amount of shooting or exposure to the elements or dirt and dust, cleaning is recommended. Disassembly of the USGI aluminum magazines is a simple procedure, but doing it improperly can cause damage.

With the spring and follower removed, run a dry cloth through the magazine body several times. You can use a toothbrush to scrub the inside of the body.

The spring and follower should be carefully examined for signs of wear or damage. All magazine springs will fatigue over time. Compare the spring to a new spring or a spring which is known to be good. If the old spring shows signs of fatigue or it is noticeably shorter, it’s time to replace it or discard the magazine.

When examining the follower, pay particular attention to any signs of chipping or cracking of the follower. Any loose chips in the magazine body are a sure indicator of follower damage.

If a magazine has worn or damaged parts, either discard the magazine or replace the parts and use the magazine exclusively for training. Training only magazines must be clearly marked to prevent them from being mistaken for a duty magazine.

Do not lubricate or leave any oils or lubrication inside the magazine or its components. Not only is it unnecessary, it will become a dirt magnet. I just wipe them down with a silicone cloth. Reassembly is in reverse order; just remember to insert the spring in any hole provided in the follower to ensure proper travel and pressure. After re-assembly, test the magazine by loading a dummy round and make certain that it feeds properly and the bolt locks back. Better yet, take the magazine to the range and test it with a little range practice.

There are numerous polymer magazines for the AR-15/M16 on the market. Disassembly methods will vary, but most are designed for easy disassembly and cleaning. In general, they require less cleaning and maintenance than aluminum USGI magazines.

Disassembly and maintenance of a SureFire High-Capacity Magazine is similar to conventional USGI aluminum magazines. SureFire magazines employ a 4×2 quad-stack configuration. They are constructed of hard M-Spec 6000 series aluminum and feature a nonbinding internal coil spring and proprietary nesting polymer follower system. The springs are cadmium coated and can be kept loaded for extended periods without magazine spring fatigue.

While SureFire High Capacity Magazines are STANAG 4179 compliant, they are designed specifically for the M4/M16 and AR-15 variants. SureFire warns that they may not function in some variants, such as the HK® 416/M27/MR556.

Drum magazines are complex. They are generally difficult to take apart and clean in the field. Many require special powder lubricants and are not designed to remain loaded for long periods. They are also bulkier than box magazines,although the drum configuration makes the height manageable and allows for prone firing and easier storage.

The combat proven Magpul PMAG D60® drum magazine does not have the issues which have plagued many drum magazines. It has wide compatibility with most STANAG 4179 magazine compliant weapons, including the 416/M27/MR556.and IWI Tavor® series.

The D60 features easy disassembly for cleaning with only a flat bladed screwdriver or similar tool. It is equipped with a ratcheting loading lever to take tension off the spring for easy hand loading. The feed tower on the D60 is compatible with most loading devices, including USGI stripper clips and guides.

You should mark all of your magazines with your initials or with an individual magazine identifier so that you can tell them apart. AR mags should be thought of as a disposable commodity. I am sure you will agree that your life and the lives of others are worth more than the price of a new magazine.

Eugene Nielsen is a private consultant and a former police officer.