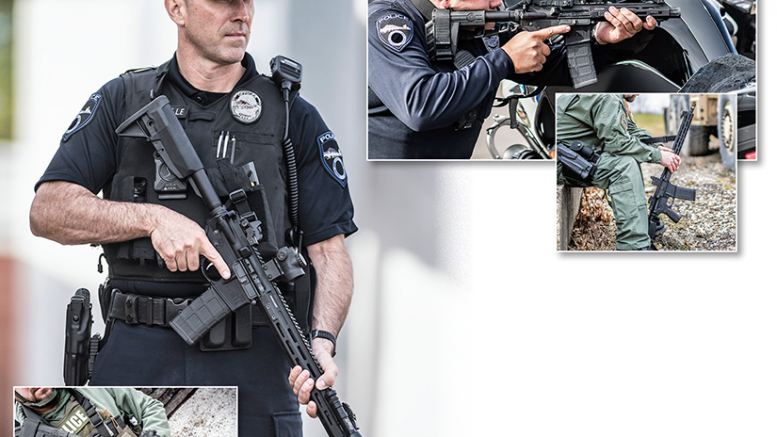 In my opinion, I prefer to have all officers equipped with rifles because they are easier to shoot accurately and are more effective than a handgun. Greater accuracy and effectiveness seem like a good combination to me.

However, there are certain insights officers need to know when they carry a patrol rifle. In addition to this knowledge, there are essential skills which must be continuously reinforced through training. These should be practiced until they become second nature.

When choosing a carbine, avoid lower priced, off-brand rifles. Generally speaking, these days, you are lucky if you get what you pay for. It is unwise to skimp on gear which can protect your life and the lives of the public you’re sworn to protect and serve.

After obtaining a quality rifle, one common mistake is hanging too many aftermarket parts on it. A lot of these accessories do nothing more than add weight and a sense of “tacti-cool.” Don’t be Cadet Tackleberry (if you don’t know who Cadet Tackleberry is, feel free to look it up). Accessories attached to your rifle should be quality items which enhance your ability to put accurate rounds on target. Officers can’t afford to use inferior, untested products which may fail when needed most. A quality light, a minimum of three magazines and a sling should be mandatory. Optics are optional; however, I’m a big fan of magnified optics on patrol rifles for their advantage in threat assessment at a distance.

An instructor once told me, “I can’t imagine an officer ever firing more than 25 yards in an urban environment, so we should sight our rifles in at 25 yards.” How many places in your world extend further than 25 yards? Parking lots, hallways in schools or hospitals, your home property, and many other locations can extend well beyond 75 feet.

When this instructor told me to sight my rifle for 25 yards, he hadn’t considered where the bullet would end up beyond 25 yards. This is critical information. Without getting too involved in external ballistics, if we sight our rifles to deliver the point of impact exactly on the point of aim at 25 yards, we will be approximately 2.2″ high at 50 yards, 5.5″ high at 100 yards and nearly 7.5″ high at 200 yards. This makes the rifle pretty much useless beyond 50 yards.

The next step is to get to the point where you can automatically adjust your point of aim to enable the bullet to land in your intended point of impact. Starting at the three yard line, shoot three shots holding your point of aim high to adjust for the mechanical offset you observed in the previous drill. Repeat this at five, seven, ten, 15, and 25 yards.

One big advantage for patrol rifles (and the AR platform in general) is that they are easier to shoot well than other platforms. Marksmanship isn’t the biggest problem when training with a patrol rifle. The biggest problem is getting officers comfortable with rifle handling skills such as working with a sling, working the selector/safety lever, reloading, and clearing malfunctions.

Currently, there are quite a few officers whose only experience with firearms is a duty handgun. Since many modern duty handguns use passive safety systems instead of mechanical safeties (such as GLOCK®), these shooters aren’t accustomed to running a rifle with an “on/off switch.” Running the selector lever is crucial to getting the rifle up and running quickly and efficiently. When you’re on the range, don’t cheat yourself by working the selector lever before the start of the drill. You’re missing the value of learning to work it correctly and you’re creating bad habits which may cost you down the road.

Reloads are another essential patrol rifle skill. If your rifle is empty, you have to feed it. Simply hit the magazine release and let the magazine hit the ground as you use your support hand to obtain a full magazine. Insert the full magazine aggressively to ensure that it is properly seated, pull on the magazine to confirm and hit the bolt release to chamber a fresh round. It sounds simple, but many shooters need to spend more time working this skill to become more efficient.

If the rifle isn’t empty, but you want to exchange a partial magazine for one which is fully loaded, there are several good techniques. The easiest method is a reload with retention. Grab the magazine in the rifle with your support hand and press the magazine release with the trigger finger. Pull the magazine out and put it in a pocket or dump pouch. Obtain a fresh magazine, insert it aggressively and give it a pull to ensure that it is locked in place. Other techniques include the more traditional tactical reload and the L-reload. Each of these has its place and can be useful, but they require more practice in order to become efficient skills.

When it comes to working in and around the rifle sling, it’s important to remember that the sling is a critical component of a patrol rifle. Just like a holster is a safe place for a handgun, a sling provides a safe place to retain a rifle. However, the sling is a piece of equipment a lot of officers get tangled up in because they’re not used to working around it. I recommend practicing your reloads, malfunction drills and other skills with the rifle slung to get used to working around it.

As long as the shooter has a relatively stable shooting platform, most officers can apply marksmanship accurately from an up close and personal distance to 100 yards with minimal training. The key is learning to run the gun quickly and accurately. A well-trained rifleman will spend a significant amount of time working on weapon presentation, target transitions and shooting from cover.

Patrol rifle operators should also be proficient working from low ready and high ready positions and starting in a variety of body positions. If we are always facing the target and standing in our best “range ninja” position, how do we respond when a threat presents itself and we have to turn and locate the threat? Try this drill: With the rifle in a relaxed low or high ready position, shuffle around casually while talking to your training partner. On the start signal, turn, locate the threat, bring the rifle up to a stable shooting position, and deliver one to two center mass shots. Gradually increase the distance, keeping your shots in an eight inch circle and breaking the shot in less than one second. At ten yards, this can be easy. At 25 yards, it gets challenging.

Target transitions are another area where patrol rifle operators should spend a good amount of training time. The hardest target transitions are moving from close targets with quick, accurate shots to a distant target with slower, precise shots. This skill is difficult for most shooters, so working on these skills can translate into increased proficiency in other areas as well. There are many effective drills, so feel free to send me an E-mail if you’re looking for ideas.

Shooting from cover is another essential patrol rifle skill. Shooting from both sides of cover is obvious, but one of the biggest training points to consider is the mechanical offset when leaning out around cover. If the rifle is canted slightly, what may appear to be a clear sight picture may, in fact, result in the muzzle of the rifle remaining behind cover. Shots put into hard cover at short range have a way of getting your attention.

Positions such as standing, kneeling, double kneeling, squatting, sitting, prone, and rollover prone are important to practice. Working around different shapes and sizes of cover can provide an opportunity to shoot from a variety of positions. A well-designed nine hole barricade can put shooters in a variety of awkward shooting positions, helping them to understand how to stabilize different shooting positions while delivering accurate shots on target.

Knowing your equipment and how to set it up is essential knowledge for every officer equipped with a patrol rifle. This includes equipment selection, rifle zeros and mechanical offset. Essential skills include target transitions, shooting from cover, positional shooting, weapon presentation, and working the selector lever. Study up and then hit the range to turn that knowledge into skills which become second nature.