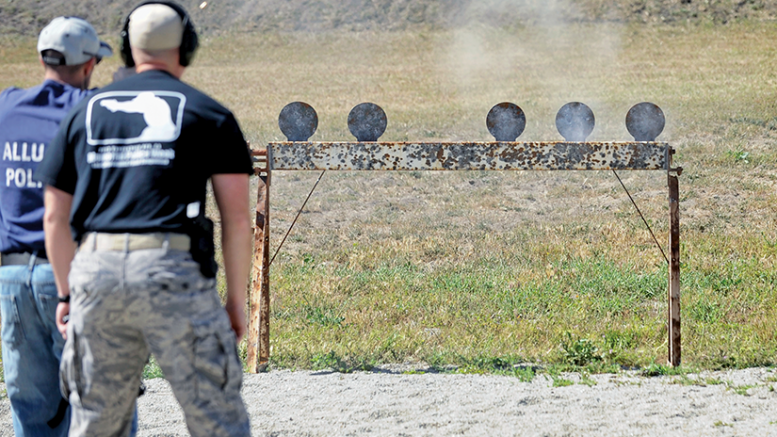 Why are steel targets a great training tool? One reason is because they don’t need to be changed over like paper or cardboard targets, thus saving valuable time which can be used for training instead of range setup.

When using steel targets, there’s no need for staples, target backers, tape, spray adhesive, or any of the other range supplies we typically need when using paper or cardboard targets. A little bit of spray paint and you’re good to go. However, most instructors have never been trained how to safely use steel targets to effectively build better shooters.

I’ve had the privilege of training with some of the best firearms instructors in the world. I’ve taken operator level classes, as well as instructor classes, from these trainers and I’ve always come away with great information and knowledge. However, I never learned much about using steel to help build better shooters. For a short time, I worked as an adjunct instructor for a well-known steel target manufacturer. As a result, I learned more about steel targets than I ever could have imagined. The topics included how steel targets can develop skills; safety protocols for using steel; the differences between handgun and rifle steel; the types of steel used in manufacturing; angles of deflection; spatter zones; target placement; and target maintenance. In short, I learned that I didn’t know what I didn’t know.

Historically, firearms instruction has emphasized precision shooting. This was done with mass qualification exercises rather than individual, realistic courses of fire. Modern firearms training begins with an emphasis on basic marksmanship skills, then advances to reactive or combative shooting skills. Combative shooting requires shooters to balance speed with accuracy to prepare officers for the fast-paced, dynamic encounters which occur on the street.

Using steel targets is a great way to develop speed and accuracy. One element shooters and instructors like about using steel targets is that they develop shooting skills at the subconscious level of awareness. The subconscious mind can learn to reflexively control the shooting process through the use of instantaneous feedback. This is done by providing instant audible and visual feedback when the target rings, falls, retracts, or drops – providing assurance of accuracy. This repetition and feedback compresses combative marksmanship into reaction time components, achieving a balance between speed and accuracy. Shooters gain confidence in their ability to quickly and accurately engage targets.

When it comes to mounting the steel target face to the stand, I do not recommend the use of targets which use rebar, brackets or clamps within the bullet impact zone. These create impact areas which can seriously change the way the bullet breaks up on impact and where the bullet fragments go.

Safe steel targets are manufactured using high quality hardened steel. If the steel is too soft, the target won’t last. Steel which is too soft will also create an unsafe training environment by making the bullet spatter unpredictable.

Look for targets produced from AR500- or AR550-grade steel with a Brinell hardness rating of at least 500. Most high quality manufacturers use steel with a Brinell hardness rating of at least 500, so if you buy from a reputable manufacturer, you’ll get the good stuff. These manufacturers source steel from suppliers who stand behind their materials and most of this steel is made in the USA. However, if you buy steel targets made in Uncle Cooter’s garage, you may end up with lower quality steel. Just because your local supplier is selling steel which is labeled AR500 doesn’t mean it compares in quality to the high carbon alloy steel plates which are made in the USA.

If you’re going to use steel targets for only handgun training, I recommend buying 3/8″ AR500 steel targets. These targets will provide sufficient strength, hardness, impact resistance, and durability for years of hard use from all duty caliber handguns.

However, if your plans include rifle training, I recommend buying 1/2″ AR500 or 1/2″ AR550 steel targets. These can take tens of thousands of rounds and can handle the heavy workload. To avoid pitting the targets, make sure the bullet velocity at the target does not exceed 3,000 fps. I generally like to see bullet velocities down around 2,800 fps as an additional safety buffer.

There are a number of items to consider when setting up a course of fire using steel targets. Check the spatter zone around the target for rocks or other debris which could send bullet fragments back towards the shooter. Placing the steel target on a dirt or grass surface is important to keeping spatter going in a predictable direction. Gravel, asphalt, concrete, or any other hard surface can lead to bullet spatter hitting the shooter or bystanders. Most of the time, bullet spatter is just annoying. However, I know of several instances which resulted in a trip to the local hospital to have bullet fragments dug out of shooters and instructors.

During handgun training, I recommend ten yards as the minimum distance between the shooter and the target. This keeps the shooter outside the spatter zone and decreases the likelihood of any safety problems. When it comes to rifle training, unless frangible ammunition is used, I recommend keeping the targets at 100 yards. Most steel targets use a 20° angle of deflection, and the last thing we want is for high velocity bullet spatter to come back and seriously injure someone. If the target is manufactured with a high angle of deflection, like the 45° target I mentioned earlier, then those targets can be safely used at closer distances.

Another consideration when setting up courses of fire is the location of other targets and target stands. Since bullet spatter can come off anything left around the steel target, we need to know where the spatter zone is and keep other targets and target stands outside this area. Additional steel targets should not be placed parallel to each other without having a barrier between them. Spatter from one target can ricochet off another target, creating a hazardous training environment. If steel targets are going to be used in a group, they should be staggered to keep them out of the spatter zone of another target.

Steel targets are durable and can last a long time with proper care and maintenance. However, they do eventually wear out. Prior to training, inspect the steel plate for cracking, pitting or other signs of damage. Steel targets which are pitted, cratered, dimpled, or punctured can create a hazardous deformation of the bullet, making it impossible to predict the spatter zone. Most of these conditions are caused by steel which is not sufficiently hard for the calibers used during training. All the high quality, reputable manufacturers recommend only using steel targets with a flat, smooth surface. Steel targets which are smooth and flat provide a predictable spatter pattern.

Another critical aspect of steel target maintenance is keeping steel targets clean and free of corrosion once the training day is over. Some people coat a rag with oil and run it over the steel to prevent corrosion. This works well for steel which is frequently used and left outside. If the targets are going to be stored inside, no one wants to get covered in oil when moving portable targets. The most common way to prevent corrosion is to use spray paint with a rust inhibitor. Taking a few minutes to spray your targets down at the end of each training day will help protect your investment.

Steel targets are a great way to keep firearms training interesting and help shooters develop combative speed and accuracy. Shooters get audible and visual feedback from steel targets instantly confirming hits. They reduce the amount of downtime on the range by eliminating the need to tape holes and post new paper targets, and they aren’t affected by rain, wind or other weather conditions. So, get out there and bang some steel!

Todd Fletcher is a sergeant in Central Oregon with over 23 years of law enforcement experience. He has presented firearms and instructor development training nationwide and at multiple regional, national and international conferences. He owns Combative Firearms Training, LLC which provides firearms training and instructor development classes to law enforcement, military, private security, and armed citizens. He can be contacted at todd@combativefirearms.com.