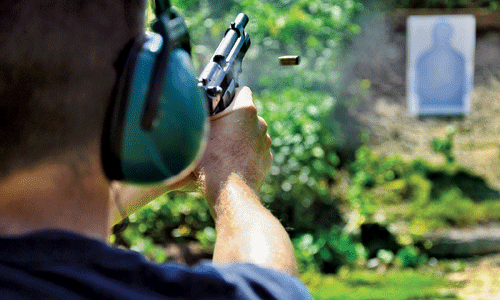 Once we build a solid foundation based on the fundamentals, we can continue to push our skills in courses of fire and scenarios which stress our ability to apply marksmanship.

Over the course of my career as a police officer and firearms instructor, I have met some instructors who are good at setting up courses of fire designed to test a shooter’s combative firearms skills. Most of these include a variety of skills important to law enforcement officers. Drawing from the holster, shooting from cover, positional shooting, multiple target transitions, shooting on the move, reloading, malfunction clearances, as well as other skills are often included.

However, I’ve noticed a lot of officers do not have a solid foundation or understanding of the fundamentals of marksmanship and other essential pistolcraft skills. In order for officers to perform to higher levels, they need to have a solid understanding of the fundamentals before they need to apply marksmanship to save their life or the life of another.

Developing a true understanding of these essential skills is important because it provides officers with the knowledge, skills and ability to self-diagnose shooting errors. If shooters can self-diagnose, then they can self-correct errors. This ensures we are practicing good habits instead of repeatedly practicing bad habits. In the spirit of helping to develop a true understanding of the fundamentals, here are some tips and tricks to understanding these essential skills.

The shooting platform can be defined as the method a shooter uses to stabilize the weapon during the firing process.  The shooting platform includes stance, grip and posture. Especially with handguns, it’s impossible for us to hold the weapon completely still. This isn’t really the point. The goal is to stabilize the gun as much as possible in whatever body position we’re in at the time we need to shoot.

Regardless of what Internet ninjas tell you, there’s no single stance, posture or body position which works for all shooters. There are advantages and disadvantages to everything we do, so it’s important to find what works best for each shooter. Making modifications to each of the shooting platforms and a version of these modified positions are where most shooters find their niche.

We should consider the shooting platform as the foundation which allows shooters to build on the other fundamentals. Our shooting platform provides balance, mobility and stability for the combative application of marksmanship. On the streets, stance may be nothing more than the position our body is in when we need to apply marksmanship. With consideration about the ongoing arguments over Weaver versus Isosceles notwithstanding, classic shooting stances are impractical in a combative environment. Shooting is done from the waist up and placement of the feet is irrelevant to making accurate hits on target. However, a shooter who has trained to develop a naturally balanced shooting platform is more stable and mobile when responding to a threat regardless of their actual body position. The keys are mobility, stability and balance.

For many shooters, hand position, or grip, may not affect the accuracy of a single shot on a static target. However, when multiple rounds are fired, grip can have a substantial effect on accuracy and recoil management. Proper hand position includes placing the strong side hand around the pistol high on the backstrap with the trigger finger indexed along the slide and the middle finger wedged tightly between the front strap of the grip and the trigger guard. The strong hand puts pressure on the pistol grip from the front strap to the backstrap of the gun as if applying pressure to a set of pliers.  The support side hand palm fills the empty space of the grip while canting the support side wrist forward and down. It’s important for shooters to place the meaty part of their palm onto the pistol grip.

Some instructors advocate squeezing the handgun using a “crush” or “convulsive grip” with both hands. These instructors, many of whom are well-known and greatly respected, believe this is what officers will do under stress so we should be training shooters to use this reaction.

On the other hand, many equally well-known and respected trainers believe well trained shooters will respond in the manner in which they have trained. For most shooters, a firm, yet relaxed, strong hand allows them to maintain control of the pistol while moving the trigger smoothly and straight to the rear.

Unlike the strong side hand, the support hand should be grasping the pistol very tightly. If the support hand is grasping so tightly as to cause the gun to shake, the shooter should loosen his/her grip until the shaking stops. A firm support hand grip helps mitigate recoil which helps decrease muzzle rise. It also helps make sight travel during recoil much more predictable resulting in quicker and more accurate follow-up shots.

While holding the sights in alignment between our eyes and the intended target, we can see the sights moving around on the target. It’s very difficult, if not impossible, to hold a handgun absolutely still. This “wobble” distracts us from firing the shot without disturbing the hold until after the bullet has left the barrel. If shooters accept the wobble, they are less likely to try to capture the perfect sight picture. In other words, let the gun fire rather than make the gun fire.  We jokingly refer to this as the “Zen” of shooting. However, shooting is comparable to the “Zen” state of calm attentiveness. Once shooters accept the fact that they can never hold a perfect sight picture, the tendency to attempt to capture a “perfect” sight picture is reduced.

After the shot is fired, shooters need to realign the sights in order to make the next shot. This concept of follow-through is a source of confusion for a lot of shooters and instructors. Many people think follow-through means pinning the trigger to the back of the trigger guard and easing it forward to reset. However, follow-through is not a trigger issue; it’s a sight issue. In order to make consistently precise or combat accurate hits at combat speed, shooters need to make the sights their focus. We need to see our sights when we fire, throughout the recoil process, and we need to see our sights settle back on target. Every shot should be fired as if we plan on firing another round. And, in order to make accurate hits, we need sights to make the next shot. Shooters need to resist the urge to come off the gun to see how they did. Instead, if you follow the sights, you will know how you did without seeing bullet holes.

Trigger management and control is much more than just pressing the trigger. Acceptable trigger management means holding the gun in alignment with the target and pressing the trigger in a manner which maintains sight alignment until the bullet has left the barrel. This includes what the shooter does before, during and after the trigger press. This process is difficult for most shooters to accomplish. Trigger control is the leading shooting problem which invades everyone’s skill set at one point or another. Even the best shooters in the world struggle with trigger control at some point.

A good trigger press means a shooter presses the trigger straight to the rear in a movement which is independent from the rest of his/her fingers or hand. Once the hands or arms begin to influence the movement of the trigger, the gun will no longer be held on the intended target. Consistent rearward pressure on the trigger, an appropriate sight picture and a stable shooting platform will keep the gun on target until the gun fires. It’s very simple, but it’s not easy.

If we know we need to manipulate the trigger by independently moving the trigger to the rear without disrupting the sights, why does this continue to be a problem for nearly all shooters? In his book, Handgun Combatives, Dave Spaulding describes the problem shooters have with trigger management. He writes, “The fingers of the hand are designed to work in concert with one another, with the thumb opposing the four fingers in a gripping action…. You use this action to grip the steering wheel, open door knobs, shake hands, as well as thousands of other functions every day. Then, a gun is placed in your hand and you are told to use the trigger finger separately of the rest. After thousands of repetitions (daily) to the contrary, is it any wonder why people have difficulty shooting a pistol accurately.”

When shooters develop a true understanding of shooting platform, sights and trigger press, they have the ability to self-diagnose and self-correct shooting errors. This helps promote and develop good habits instead of routinely practicing bad habits.

Todd Fletcher is a sergeant in Central Oregon with over 23 years of law enforcement experience. He has presented firearms and instructor development training nationwide and at multiple regional, national and international conferences. He owns Combative Firearms Training, LLC which provides firearms training and instructor development classes to law enforcement, military, private security, and armed citizens. He can be contacted at Todd@CombativeFirearms.com.