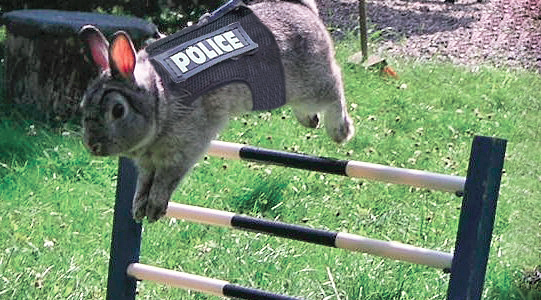 Now, there’s a harebrained idea that never really caught on!… When asked at a town meeting what his plans were for drug enforcement, a candidate for mayor of Phoenixville, Pennsylvania (population under 17,000), replied he would have the police department deploy drug sniffing bunnies. Yes, really, rabbits – they’re much cheaper to maintain than trained dogs. “I was dead serious,” he said later. “I would not make a joke about a rabbit if I did not believe it to be true.” He had seen a photo of a cop with a “police rabbit” on a leash – on the Internet, of course – and thought the Photoshopped image was real. The photo had been previously posted by the Amherst, NY, Police Department as an April Fools’ joke. (Too bad he didn’t hop onto the Internet to check that story out first…)

“Wait! What? You want me to take what kind of exam to see if I qualify?”… A Pennsylvania gynecologist is baffled by the fact that she has been inundated with calls from men trying to set up appointments after hearing she was permitted to prescribe medical marijuana. The doctor was mentioned in the media as being eligible to certify medical marijuana users and then her office phone started ringing off the hook. It was primarily men on the line. This is odd since she’s an OB-GYN who treats women exclusively. (Sorry, guys, I’m afraid your claims of “postpartum depression” will not qualifiy you for medical marijuana.)

So, how long will they be in prison? Don’t worry, “just a little” while!… In Mesa County, Colorado, a sheriff’s deputy was on patrol when he smelled the odor of fresh marijuana coming from a rental truck. Since the truck was speeding, he pulled it over and asked the 53-year-old driver if he had any marijuana. “Just a little,” the driver said. He then agreed to show the deputy what he meant by a “little.” He pulled up the rolling door, pulled out a trash bag, poked a finger through the plastic, and pulled out some weed. “It’s just a little bit,” he told the deputy. “I can throw it out.” But, the deputy could see other trash bags: In all, there were 87 bags holding 3,100 pounds of marijuana. The man and his 49-year-old passenger were arrested. (“It’s just a little bit” = “I only had one beer.”)

They’re the same ones who feel “SLOW PEDESTRIAN CROSSING” signs discriminate against fast pedestrians… The Iowa Department Of Transportation (IDOT) reports it actually gets this question on a pretty regular basis, “Why don’t they put ‘Deer Crossing’ signs in better places so deer know where to cross highways safely?” Apparently tired of the question, the IDOT posted the answer on their Facebook page, “Deer can’t read signs. Drivers can. This sign isn’t intended to tell deer where to cross; it’s for drivers to be alert that deer have been in this area in the past.” The IDOT notes that, in the first ten months of this year, there have been at least 3,344 car/animal crashes. (Deer are always crossing in the wrong places.They should be ticketed!)

What do you expect from a guy who loves to pin “Kick Me” signs on himself?… “How long is it gonna take yall dumb ass’s [sic] to find me?” a daring young man posted on the sheriff’s office’s Facebook page in Vernon Parish, Louisiana. He gave the agency a one star rating – and posted an image with an arrow indicating where he lived, along with the address of his “trailor” [sic]. He was easily arrested on his outstanding warrant. The sheriff’s office even posted about it, thanking the man for “reminding” them of his arrest warrant. (I wonder if he’s going to upgrade the sheriff’s office to five stars?)

Remember when the Hells Angels used to be really tough?… Tennessee police say a Knoxville man was arrested for burglary while dressed as a pirate. The Dunlap Police Department says the accused was arrested over the weekend on charges of burglary and resisting arrest. The man also goes by the name of “Captain Jack Sparrow” and is a member of the Hells Angels motorcycle club. When he was taken into custody, police said he was wearing a black pirate hat, a black vest, a brown jacket, and red gloves. (“Arghhh, can somebody help me? I can’t seem to find the ocean here in Knoxville.”)

It’s a good thing they got him before he caused “Panda monium”… Police in Minnesota said they ticketed a man in a panda suit on a motorcycle who was wearing an oversized animal head instead of a helmet. The state police said a driver called 911 to report someone in a panda suit riding a motorcycle on Highway 101. The caller said the biker’s vision appeared to be obstructed and the person was riding with no hands and weaving through traffic. Troopers caught up to the rider who said the suit was intended to help his motorcycle videos “go viral.” He was cited for reckless driving. (It sounds like he was pandering to an online audience – thankfully, he didn’t get fur.)