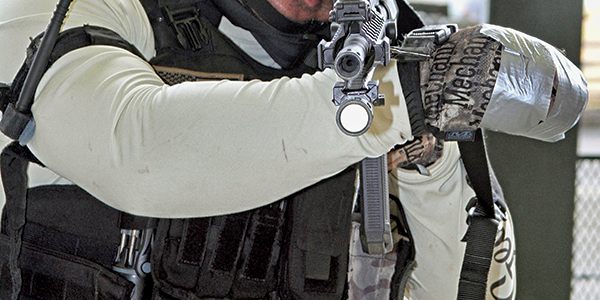 This jointly taught combat casualty course stresses that officers should possess the ability to press home the fight and render aggressive patient care, not only to themselves, but also to others who may have been injured.

Law Enforcement (LE) trainers previously taught that, if a police officer’s hand or arm was injured in a gunfight, he /she was to put that arm/hand behind his/her back and continue the combat course with the weak or support hand. The premise was that, even though an officer may be shot or injured, he/she should finish the fight, take out the bad guy and deal with the injury afterward.

Enter Hugh Coffee of Ditch Medicine and Chase Jenkins of Talon Defense. Their tactical combat and casualty care methodologies, modeled after the accepted protocols of Care Under Fire and Tactical Field Care, involve medical care and doing what is needed to stay in the fight – training which goes beyond the norm commonly offered in combat casualty care courses.

This training concept may seem complex on paper, yet it’s simple in execution. They incorporate proven lifesaving shooting skills instruction, along with emergency medical intervention. These methodologies are based upon concepts proven in the combat zones of both Iraq and Afghanistan.

Every street police officer should know how to deal with the three types of external bleeding. Capillary bleeding occurs when a minor scrape or cut opens capillaries; it is almost always slow bleeding and small in quantity. Venous bleeding involves deep cuts capable of opening veins, typically resulting in a steady, but relatively slow, flow of dark red blood. Usually, the best way to stop this is to put direct pressure on the wound. Arterial bleeding is less common and the most dangerous, involving a large volume of bright red blood which comes in spurts that correspond with each beat of the heart. Treatment of arterial bleeding is situational dependent. The current tactical situation would dictate which intervention is most appropriate – tourniquet placement, stopgap pressure, direct pressure, or some combination of these interventions. If immediate intervention is not directly carried out, a severe arterial wound can cause death within a few minutes.

The type of wounds addressed in Brass and Blood training are those caused by gunshots with complications, including external and internal bleeding and damage to underlying structures.

Training began with a safety briefing, range rules and team assignments. As it progressed, so did the stress levels of the trainees. The dynamic mechanics of the progressing scenarios, as in real-life situations, did not involve calling to the bad guy for time-out, but rather it continued with the officers addressing both their wound(s) and the bad guy(s).

The Brass and Blood four day training course monitored for this article was conducted in partnership with the Pinellas County, Florida, Sheriff’s Office.The students were separated into two equal groups. Talon Defense taught the firearms segment and Ditch Medicine taught the medical care training portion. Both parts of this training eventually dovetailed into the last day of the class and were a real eye-opener for most of the law enforcement students.

Along with having the officers shoot from their strong side, Talon Defense also incorporated drills which had them drawing their handguns and shooting, as well as reloading, all with their support (weak) hand. This was to instill in them that they could accomplish this with minimal adjustments to their normal shooting stance and maintain safety (muzzle discipline). Some officers found it easier to draw their handguns if they grabbed their duty belt and shifted their holster closer to the center of their body. Others had duty issued leg holsters which posed various other problems. Talon Defense addressed these to help these officers overcome any challenges.

After conducting both strong side and support (weak) side shooting drills, training progressed to the uncompromising tennis balls. In this drill, officers held the tennis ball in their support hand and executed a basic two-handed shooting stance where both hands meet at arm’s length in front of the individual. The challenge, according to Talon Defense, was to isolate the trigger finger with repeated practice and let their subconscious take over.

Course students were instructed to consciously think about how hard they were gripping the pistol because gripping it tightly would make it harder to isolate the trigger. Instead, they should apply trigger pressure similar to pressing a button in an elevator. With this method of shooting, the police students held the gun like it was a beer can, not squeezing it to crush it, but rather holding it just securely enough not to spill beer should someone bump into them.

The officers proceeded to take several shots to get accustomed to this shooting style. The rationale for the tennis ball in the support hand was to simulate an injured, gunshot wounded hand, so there could not be a proper, two-handed grip. It also helped the student learn to use his support hand as best as possible to get shots on target in a safe and efficient manner.

It was emphasized that, after neutralizing the bad guy and making sure he was down and out of the fight, the officer should keep the handgun’s muzzle pointed toward him. This was to make certain that, should the bad guy get back into the fight, the firearm was already on target and all that was needed was to press the trigger a few more times to stop any further threat.

Next, Talon Defense had the officers place a tennis ball in the crux of an elbow, with their arm bent upwards and their hands almost touching their shoulders. Their arms were then duct taped back in a stress position giving them very limited or, in most instances, no use of their support hand/arm. With one entire arm effectively immobilized, they then shot a course of fire similar to the one they shot at the start of their day.

The instructor was available to explain how to work through the handgun/long gun drills and also demonstrated how to load a long gun (most students had an AR/M4 variant) while in this simulated “injured” condition.

One of the more interesting elements to note was that officers were instructed to target on the thoracic and cranial ocular cavity of the body. The cranial ocular cavity is the area located by making an imaginary triangle between both eyes to the tip of the nose. It’s all soft tissue, making bullet penetration much easier should that target present itself. The thoracic cavity can be considered to be the center of the upper chest area located from just above the suprasternal notch to just below the base of the throat. This is also referred to as the jugular notch, the visible indention between the neck and the collarbone. A direct hit there is likely to penetrate the C7-T1 vertebrae, stopping most threats quickly.

Ditch Medicine’s and Talon Defense’s goal was to create a safe and proficient tactical thinker who would be safe and capable on the street and not to simply react to any given situation.

By design, all of the drills were set up to include problem-solving, stress-inducing scenarios, in order to make the officers realize that they can, and will, be victorious in a firefight, even if they are injured. The training environment was also structured with both known and unknown threats. Sometimes, for example, the area was wet, muddy and littered with debris. Individuals were forced to work from unorthodox positions while under duress in adverse conditions, mirroring what they might face on the street.

In an injury where arterial bleeding is involved, a properly applied tourniquet has been proven to save a great many lives. With this in mind, training exercises were begun, with students learning self-aid application of tourniquets and then transitioning to buddy aid.

In the drill, “Trauma Shuttle,” officers were taught to apply tourniquets and bandages to themselves while shuttling back and forth at 15 yard lengths. At the completion of the training evolution, the officer would have put in place two bandages and two tourniquets. This was accompanied by clear and loud verbalization of the proper steps involved.

Officers also practiced several proven methods of stopping severe bleeding. These included cutting one inch wide by ten inch long strips of cloth from a T-shirt and inserting them directly into a wound by pushing them in with their fingers to form a “clot” of sorts until further medical attention could be sought.

They were also taught “March to X.” This exercise involves sending pairs of law enforcement officers into a hot, downrange situation and immediately triaging, treating and retrieving an injured individual who was bleeding out – while returning fire against the bad guy(s).

The scenario which rounded off the training had individual officers working in close proximity to other team members. During this, the individual had to employ safe tactics with both primary and secondary weapons, direct his team (at certain times), take orders from others, use discrimination in determining the relevant threat, and apply correct medical procedures when and where appropriate.

The AAJT addresses noncompressible hemorrhage in the leg, groin, pelvis, armpit, and upper extremities which is not treatable by a tourniquet. It is stable, easy to apply and completely stops the loss of blood to treat a class of preventable deaths not previously treatable.

According to North American Rescue, the JETT includes two pressure devices in a single tool, allowing for simultaneous blockage of blood flow to both lower limbs (bilateral) with an easy to apply, preassembled, ready to use belt solution. It is used for high extremity wounds in the thigh/groin region where tourniquets cannot be placed or are less effective, stopping the bleeding and potentially saving the life of a casualty which would otherwise bleed out in minutes. Penetrating trauma, blast injuries and amputation are examples of injuries which may require treatment with this device.

The final scenario was well choreographed with multiple disciplines included to challenge students. Teams had to engage the appropriate threats to find their way to, and rescue, a simulated downed individual.

Students were also required to properly assess and treat the most relevant injuries. Additionally, as threats were engaged, the wounded individual had to be relocated. The teams going through these scenarios had to continually reassess their patient care while maintaining situational awareness to threats, as well as treat injuries at the appropriate times. Training took place under blue skies and/or darkness, white light or no light, and there were time limits. If the team didn’t finish during the prescribed time frame, the scenario continued until they reached the designated location.

The course scenarios were in no way easy, but the Brass and Blood course and scenario training were designed to help students become both thinkers as well as fighters; responders and not just reactors. Reality-based training such as this demonstrates to officers that they can take the necessary steps to rescue themselves or others under the most stressful situations.

The entire class pushed their fellow students to succeed. When it was over, all law enforcement students were safer and more effective than when they started.

Jim Weiss is a retired lieutenant from the Brook Park, Ohio, Police Department and a freelance writer.

P.J. Ryan is a retired law enforcement officer from the Southeast. During his career, he was a state certified law enforcement firearms instructor and an agency armorer. He was also a member of his agency’s Emergency Response Team, a Certified Edged Weapon Awareness and Spontaneous Knife Defense Instructor and a Certified Israeli Instinctive Shooting Instructor. He is currently involved in firearms development, training and tactics.

Mickey Davis is a California-based writer and author.