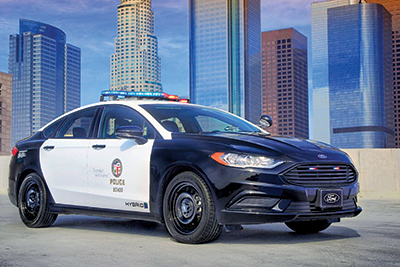 Ford plans to invest $4.5 billion and put 13 new electrified vehicles on the road worldwide by 2020. These include an F-150 hybrid, a Mustang hybrid, a Transit Custom plug-in hybrid, a self-driving hybrid, and a fully electric small SUV with an estimated 300 mile range.  Also among these new hybrids is the first pursuit-rated hybrid police car, the Ford Police Responder™ Hybrid Sedan. Incidentally, some departments use hybrids like the Toyota® Prius or Chevrolet® Volt for administrative duties, but not for serious police tasks which might involve a high-speed chase.

This new hybrid police car, based on the Ford Fusion Hybrid, is aimed mainly at urban environments. Being pursuit-rated means a vehicle is specially designed and equipped for high-speed pursuits. To officially qualify as “pursuit-rated,” the Ford Police Responder will be tested this fall by the Los Angeles Sheriff’s Department and the Michigan State Police, the two agencies which rate pursuit vehicles for police departments across the country.

The front-wheel drive Ford Police Responder Hybrid is powered by an Atkinson-cycle 2.0L, four-cylinder, 141 horsepower engine combined with an 88 kilowatt permanent magnet AC synchronous motor. A total of 188 horsepower is available when maximum performance is required.  After five seconds of hard driving, it automatically shifts into pursuit mode for maximum acceleration.

The Atkinson-cycle engine offers high efficiency at the expense of some power loss at low speeds and is frequently used in hybrids because the electric motor makes up for the lost low speed output. Ford states that the Police Responder Hybrid should have an EPA estimated combined gas mileage of 38 mpg, more than twice that of today’s Ford Police Interceptor with its 3.7L V-6 (with an EPA estimated 18 mpg combined fuel economy). Final EPA estimated ratings are not yet available.

The electric motor, which also serves as a generator during regenerative braking, is supplied by an advanced lithium-ion battery which provides electric only driving at up to 60 mph. Having only a 1.4 kilowatt hour battery, its electric only, stealth mode capability is limited to a couple of miles. For comparison, the Ford Fusion Energi Plug-In Hybrid with a 7.6 kilowatt hour lithium-ion battery gives a 21 mile all-electric range.

Being a hybrid brings another big advantage for law enforcement duty: the lithium-ion battery allows the engine to be shut off for brief periods while keeping all of the electronics – lights, computers, radios, etc. – running.  While idling, the battery powered, high electrical loads of a police vehicle reduce engine runtime and save an estimated 0.27 gallons of fuel per hour. Operators could see nearly $3,900 annual potential fuel savings relative to the Police Interceptor, if a police vehicle is driven 20,000 miles per year, runs two shifts per day, 365 days per year, idles 4.9 hours per eight hour shift, and is fueled at an average gas price of $2.50 per gallon.  An online Ford Police Responder calculator can be used to determine how much departments may potentially save.

To be pursuit-rated, the Ford Police Responder Hybrid has an upgraded suspension, wheels, tires, and brakes. It has met vehicle dynamics and safety standards, such as 75 mph rear end crash testing. Additionally, there are other changes which are required for serious police work. It also has better engine cooling, an upgraded electrical system, a space for center console mounting, predrilled holes to accommodate police equipment, and skid plates underneath to protect mechanical components. The interior has also been modified for police use with front seat cushions shaped to accommodate equipment belts and gun holsters. There are antistab plates positioned in the front seat backs; a movable rotary gear shift dial which can be relocated within the car depending on department needs; a certified speedometer; additional power distribution in the trunk; and heavy-duty front door tethers. The backseat area has been designed without seat back or door pockets where a suspect could hide contraband or weapons. The car also has easy to clean vinyl rear seats.

The downside is that this new vehicle is a mid-size sedan which is smaller than the full-size Taurus or the Explorer SUV.  Vehicle size can be a big issue for police departments, since a car has to be able to hold two officers and have enough space for a partition between the front and backseat where arrestees sit. Plus, officers need space to carry more equipment these days in order to be able to handle any kind of emergency. Larger vehicles also generally afford better crash protection.

The Los Angeles Police Department is launching the Police Responder. It will help cut emissions in a city famous for its air quality problems and will be hitting the streets in summer 2018. Pricing has not yet been disclosed. The Police Responder Hybrid Sedan is intended mostly for urban use. For chasing down speedsters on the highway, Ford’s Taurus-based Police Interceptor, available with a turbocharged V-6 engine, is still recommended.

Bill Siuru is a retired USAF colonel. He has a Ph.D. in mechanical engineering from Arizona State University.  For the past 45 years, he has been writing about automotive, aviation and technology subjects.

The LAPD Is Getting 100 BMW i3 All-Electric Police Cars

The Los Angeles Police Department is acquiring 100 BMW i3 electric vehicles. Wearing the same black-and-white livery as other LAPD police cars, the i3s will be used for nonemergency functions, including transporting officers from one place to another and for community outreach. They won’t be used for chasing bad guys. The BMW i3 is already used by several cities in England and Europe.

In deciding to purchase the i3, the LAPD evaluated several electric vehicles, including the Tesla Model S, on the streets of Los Angeles as part of the LAPD’s everyday fleet. While the Tesla offers the performance needed for high-pursuit use, the LAPD had concerns over a possible power outage and the resulting lack of ability to recharge the Teslas. Cost was another factor. The BMW is significantly cheaper to buy or lease than the Tesla – $42,400 (base price) for the i3 versus about $100,000 for the Tesla. Other factors favoring the i3 included BMW ConnectedDrive services to support fleet management applications and its reliability.

The BMW i3 is the first purpose-built electric production vehicle to be made primarily of lightweight Carbon Fiber Reinforced Plastic (CFRP). With 170 horsepower and 184 ft lbs of torque from the electric motor and a 22 kilowatt lithium-ion battery, the i3 is good for 80-100 miles of driving on electricity. The i3 has several attributes which suit it to police work. Its compact size, short wheelbase and extremely tight turning radius make maneuvering on crowded city streets easier. As with all electric cars, the i3 operates quietly, emits nothing and has very low per mile operating costs.

BMW will also develop software which interfaces with the LAPD’s fleet management system, allowing the department to electronically receive critical vehicle data needed to effectively maintain their fleet. BMW is also designing a Web tool which will allow the department to track their fleet in near real time, contributing to improved deployment, utilization and the efficient charging of their fleet of BMW i3s.